The entrance to this instance, AKA Ground Chief Vortexx, is near the Mitaar Hero entrance at the bottom of the ramp to Arid Rift, southeast. The actual way in, is the portal on the floor. As of 18.3 you no longer need to have the Neretva Canyons quests completed to gain access to this instance. 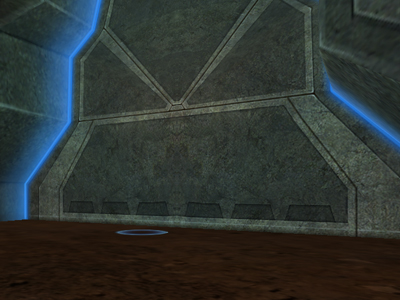 If you're unsure of your capacities to survive this encounter, you can first ask the Spirit of Judgement to pass judgement over you:

Inside you will see the vile and quite tall Ground Chief Vortexx standing in the center, waiting for you to fall into his traps. You will also see 4 platforms on the ground north, east, south and west from where he is standing. 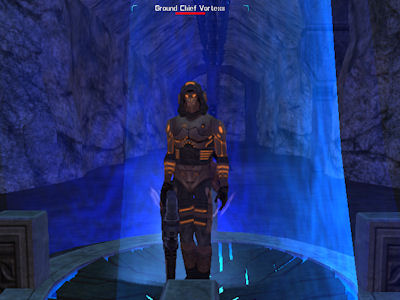 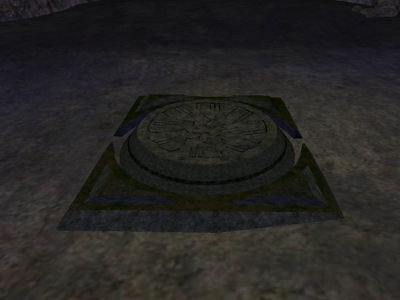 One of the 4 platforms

There are a few things that the entire team must be aware of, otherwise you will probably wipe and stare at reclaim.

Begin by running to the center of the area since that particular spot gives you a buff, Healing Efficiency by 40% and Attack Rating by 100 as long as you remain there. It is also the only safe place where you won't get automatically nano drained, so it's important to stay in the center or you will be fighting at a great disadvantage. 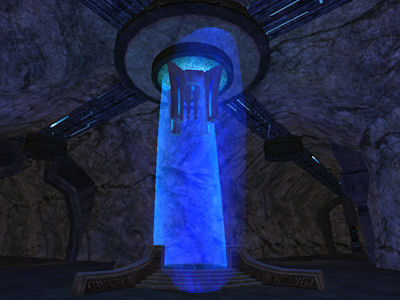 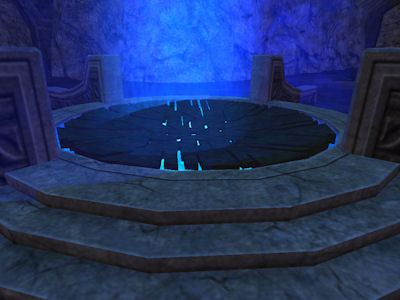 Within a very short time Spirits will spawn at the platforms, each has a beam of color that when they die appears in each platform. Colors are Red, Green, Yellow and Blue. They appear in a clockwise order (left to right).

You need 4 crystals (Red, Green, Gold and Blue) which you can get from the Dust Brigade mobs in the Neretva Canyons. This is the order of the crystals, so be careful.

When a spirit goes up in the air a beam will shine upon the pedestal, you have a few seconds to use the color matching crystal (Gold is Yellow beam), if you succeed a message like this will appear in vicinity (green for example):

Understanding comes in a flash. The secret of the Pulsating Green crystal is yours forever and you will never be short of breath here again.

Once you become immune, it lasts forever and you won't have to use that particular crystal ever again.

When someone is not immune to blue, then nasty adds come, and it's a wipe in most cases. Green poisons the entire team, thus getting a nasty DoT. Missing gold spawns a fire in the center of the area that gives a nasty dot, move out of it but try to stay on edge of it as much as possible as to avoid the DoT. It will disappear after a while.

Spirits only spawn once per instance, once all 4 are dead, you can bring in team members who do not have crystals.

After the spirits are gone and when Vortexx goes down to about 75% he will randomly cast a blind (makes him harder to hit) and a fear on you, forcing you to run away from him. He will shout one of the four following sentences right before he does:

Flee you pathetic insects!
Fear my power!
I will have your head!
Breathe in the terror!

That will give you a few seconds to run one of the platforms (where the spirits spawned) and standithere to get a nano which will block Vortexx's nano attack.

The Platforms will "light up" as blue dots on your PF Map (when tabbed it will show as a Notum Eruption), so keep your eyes on it, if they are not active, they won't work. They active clockwise. A red nano effect will show visually on yourself to show the nano was successful.

In the last 2 bubbles he will summon 4 Desecrated Spirits lvl 220, ignore them until after he is dead.

It is possible the main healer (usually a Doctor) might take unshakable aggro from adds near the end. We recommend either kiting mobs. or have an enforcer spam the Mongo nano.

Once Vortexx is dead, an exit beacon and a level 300 Watchful Spirit will spawn and will shake his head at you once you start talking to it. The spirit cannot be attacked. 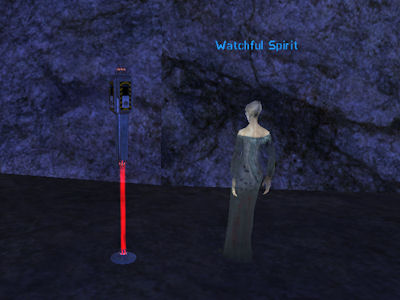 The watchful spirit is available to talk to once you have completed both Vortexx and Mitaar Hero, and is part of the path to
"The Xan" quest which leads to the 12-man raid instance.


⇑
Loot from this Instance:

Last updated on 03.13.2020 by bitnykk
Written by Windguaerd.
Updated by Bitnykk.
Research submitted by the AO Universe team.
Do you have questions about this article or found an error? 8 comment(s) - Click here to view them!