Feedback: Feedback-Thread
Sector 42 is the hardest sector yet to come.


⇑
How to gain access:
To get access to this Sector you need 3 Kyr'Ozch Data Core that drop from bosses in sector 13, 28 and 35. When you have all 3 Kyr'Ozch Cores you can trade them with the Unicorn Access Supervisor outside Sector 42 gates. He will give you a Decrypted Kyr'Ozch Data Core.

This key will enable you to access Alien Playfield Sector 42, but mind you should never try to enter without a large raid-force, nor without clear greenlight from your raid leader(s) for the best clock synchronization !


⇑
Profession roles:
Before considering to join any 42 raid, make sure you exactly know what are the key roles and if you have the corresponding knowledge and toolset !

Enforcers : are supposed to have hugest amount of HP (Kraken advised) & best AOE / target aggro-makers for their level (220 if possible).
Doctors : are expected to have the top healing nanos to take main healing role, aka Bodily Invigoration & Improved Complete Healing at level 220 ; lower doctor (or nanos) should only be backup support.
Bureaucrats : are awaited with the mandatory Shackle of Obedience nano ! They also might bring best debuffs they can (as doctors can't always use UBT), plus AOE snare and LMN/J mezz which are secondary.
Fixers : are needed if final boss is popped (check details below) with the best AOE snare (e.g. : Spin Nanoweb) they can bring ; Crats could be seconding them here at best, but hardly replace them in such role.
Engineers : are appreciated with the best Blind (e.g. : Disruptive Void Projector) they can spam around ; they also can bring decent reflects but the Soldiers could also provide better ones.
Keepers : are enjoyed with the best auras (defense, heal/nano) they have in their backpack ; this ain't decisive in general but can become convenient in critical situations.
Agents, Martials, Advys : could offer a serious backup healing with the best nanos they can afford ; hence they're most of the times spread equally among teams if there's not enough doctors.
Traders : would represent the second best source of debuffs after Crat's, especially when they can land AR or AC drainers on nasty mobs & bosses ...
All & others : are advised to fire the most damage they can (especially Nanotechs, Shades & Metas), use assist macros and listen to raid leader(s) in various chat (or vocal) channels.


⇑
How to enter:
So, as stated above and when prompted so by your raid leader(s), you need to speak with the Unicorn Access Supervisor outside the gates to Sector 42.

Once you have received your Decrypted Kyr'Ozch Data Core from him, you need to accept his mission for entering the sector.

Make sure you tell him in the dialog that you will accept the mission. YOU MUST FOLLOW THE DIALOG ALL THE WAY THROUGH TO THE END, OTHERWISE YOU WILL NOT BE ABLE TO ENTER!
(You must end dialog with final "goodbye" !)

Now in your NCU Window you should have a nanoprogram running called "Unicorn Authorization". When you have this buff, you can leave and re-enter the playfield for 20 minutes only. As you enter you will also get a new buff called "Recall Beacon" that will last for 90 minutes ; after that time frame you will simply get kicked from playfield.


⇑
Sector 42 Layout:
Here is an overview of the sector ; you can click on the image to see a larger version. 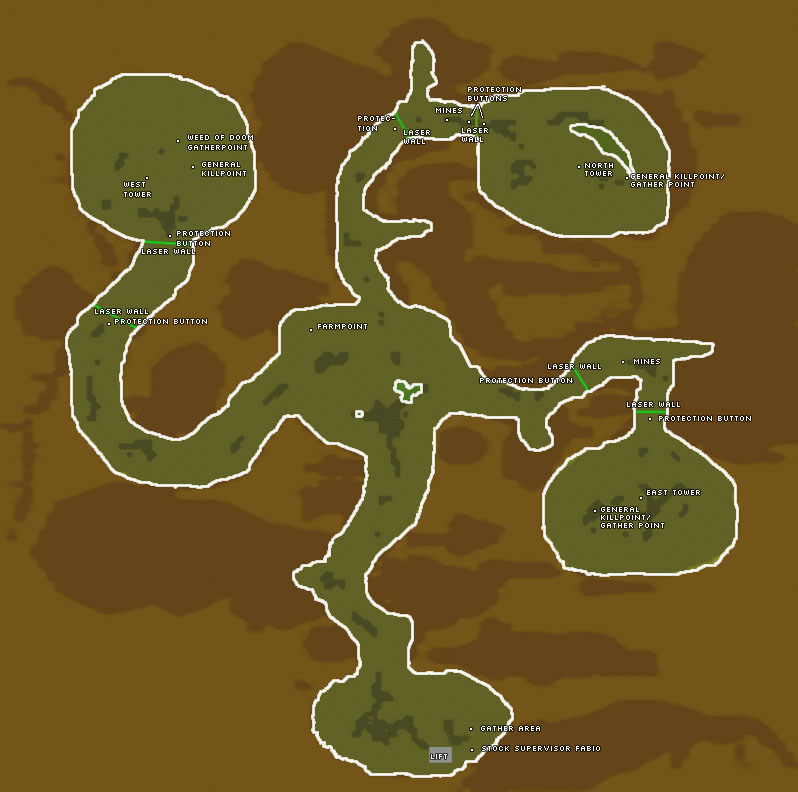 As you can see, forces will start southern, move north until center and then be distributed.


⇑
Strategy:
You will need 3 raid-forces here, meaning 1 for each Signal Tower to kill synchro : East (easiest, requiring less forces), North (intermediate difficulty) and West (longest path & hardest side). So in general, raid forces are spent accordingly, as raid is a total collective success only if all sides succeed individually !

Each raid should have its own caller(s), Soldiers being often preferred in such key role, and make them easy to summon with a calling macro all raiders should use. The order of calling should always prioritize the Alien Cocoons and their bringers, as this can kill someone very fast and/or make tank & healer(s) unable to react.

A common tactic is that at least North helps East until near its fence then move back until center crossroad and then move toward North ; this way East has very few chance to fail the raid.
If West also came to help both East and North, forces will split again at North spawn, then West keeps on circling until its own path to West ; note that this tactic takes longer as West has the longest road already.

All along the way, the raid forces could be annoyed by Alien Patrollers that do a huge amount of damage and criticals. The best tactic here is to snare them using crat's Shackle of Obedience (or Last Minute Negociation mezz at worse) and get away from them as quickly as possible.

One other very important reminder is to listen to the raid leader of your side all the time and remember to check your NCU after you have clicked on the Biological transceivers *before* passing the fence. DO NOT move over the fence before you have checked your NCU for Alien Bio-Transmission Encoder or you'd instantly die !

Once all sides are arrived to their respective Towers, one main raid-leader will have an ongoing dialog with the other 2 raid channels to ensure that all 3 towers are taken down at approximately the same time (the countdown !cd command is generally used here), which by the way will depop the entrance NPC for 1 hour. Only ranged and pets should attack Alien Signal towers.

When all Mini bosses are taken down and rolled, all sides have to repeat the procedure with synchro killing 3 towers again. When all the towers are taken down for the second time, the Artillery Commanders should spawn at each raid group (this will take 1 minute approx, so you have good time to rebuff up). Each raid group should spread out in a "fan-formation" and only their main tank should engage directly in front of the boss.

The Artillery Commander will often spawn waves of adds named Alien Seekers. These adds need to be taken out very fast with specials when they pop or, better, have a fixer (or crat if no fixer) to spam AoE snare on them. In this case DO NOT hit nor root them, as these Seekers do some nasty nukes that can kill raiders in 1-3 hits (depending on their HP).

The faster you kill the Artillery commander, the more seekers you will get. So its advisable to use regular damage on Artillery commander, while saving specials (or snares) for Seekers ; if the advised snaring tactic is used, the raid force will have to move with tank & boss "dance", shifting away from Patrollers and Seekers groups.


⇑
Mini-bosses loots:
Let's look at the loot you can get your hands on from these mini bosses. 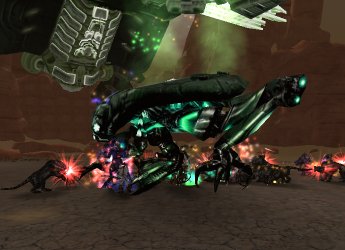 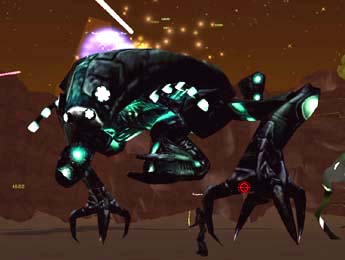 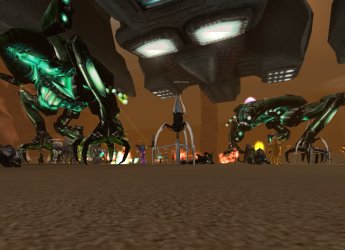 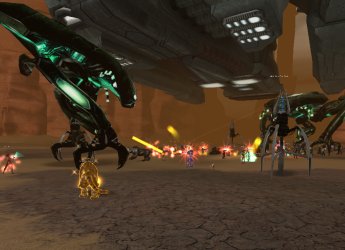 ⇑
Final Boss loots:
And the final boss has all the phat's! 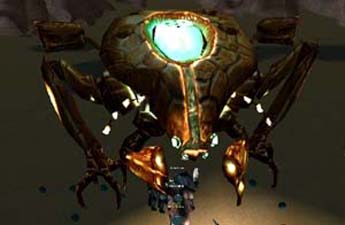 Note : in general, only NOdrops are urgently rolled during raid, the leader looting all YESdrops and rolling them after raid in a safer area.


Last updated on 12.23.2019 by Khuri
Written by Sovieta
Formatting and additions by the AOU team
Do you have questions about this article or found an error? 4 comment(s) - Click here to view them!