Feedback: Feedback-Thread
In order to proceed from Penumbra into Inferno, it is necessary to loot A slightly dented molar from the great ice golem and hand it in to Ergo.

While this Ice Golem can be spawned as a Pocket Boss at an Incarnator in Penumbra (see AOU's Pocket Boss guide for details in some of the tradeskills involved and the process of spawning one) its pattern can NOT be farmed like a regular Pocket Boss, but must instead be quested for.

This guide will document the steps necessary to come into the posession of such a pattern by doing a quest for the Unredeemed.

Along the questline, the following items will be required:

A Page From The Yomi Grimoire

The Yomi page is a random drop off the Adonis catacomb bosses, mandatory to start the quest. Those bosses are roughly level 210, so soloing there is not easy peasy. This map, courtesy of Spheremap, shows the spawnpoint of the bosses: 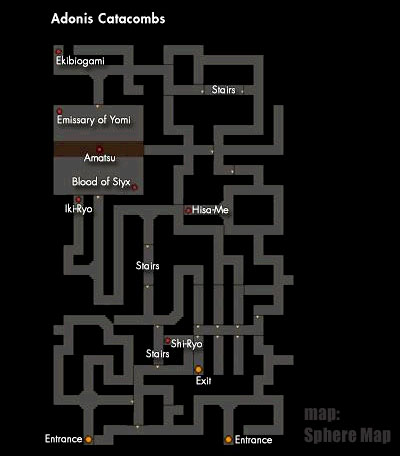 But since heart is not trivial to acquire & the quest chain is on a considerably short timer, you have 2 possible options for the incoming quest :
1- whether you collect the heart BEFORE starting on the quest chain ; in this particular case, you will preferably farm 6 Cama Insignias before anything ; it delays the start but is safer and then saves several movements during short quest/item timers.
2- whether you will acquire the heart AFTER starting on the quest ; in this 2nd option, you won't farm any Insignia and will use quest items to pop Cama ; it's a quicker start but possibly buggier and requiring more movements (unless you have all keys).

Cama's heart is a 100% drop off The Redeemed Cama, of 1h30 duration. For the procedure of spawning him right now if you choosed so, see our very own Vanya Sanctuary Quest. The relevant part of the chain starts with the death of Watcher Cama Hume-Ulma.

After going Adonis Catacombs to farm some (Nodrop) Yomi Grimoire page (and possibly at Reedeemed temple to obtain Cama's heart) you can go to Unreedeemed temple.

The first Unredeemed to talk to is the Hypnagogic Ixi-Lum Van. He's the temple's librarian, and can be found in the 100% suppression gas western side room, before its very core.

For the ones among us interested in the reason why you had to take a hold of a Yomi page, feel free to have a quick chat with him. If you're more interested in getting this all done and over with, it's okay to just trade him said page. In return, he will hand you a Book of Insignificant Rituals, and ask you to deliver it to the Prophet Urga Van.

The Book of Insignificant Rituals 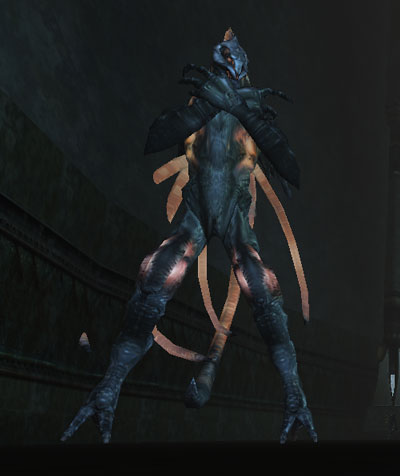 The Prophet isn't far, in fact he's just a short walk south from the room entrance. His gigantic proportions also make him very hard to miss. But before handing the Book to him, it might be advisable to check the other side room. In case a Clan raid force is forming there bent on killing Vanya, it might be a bad idea to spawn him for them... So after a mandatory check, or if you're feeling adventurous, feel free to talk to the Prophet, and tell him you have something for him. You will get prompted to hand him the book. He will immediately send you over into the eastern sideroom in 75% suppression gas, where he has spawned the Unredeemed Vanya, who is eager to find out who called for him. So best not make him wait! 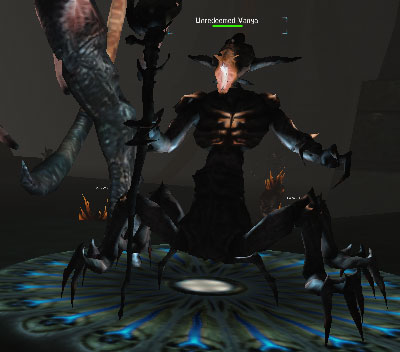 Vanya is a very straight forward creature, so he immediately asks about your business. After reporting to him that you would like to know about the Ice Golem, and that you need to "meet" him for Ergo, he finally asks for the Book of Insignificant Rituals. As soon as he received this, he will despawn and hand out a mission to strike down the Redeemed Cama. This mission is on a 10 hour timer.

If you already looted Beating heart, you can skip this paragraph.
If you didn't loot Cama's heart before quest start, go to Redeemed temple. Kill Ecclesiast and loot Sacred Blueprint. Then trade Ardent Gulu Van the Sealed instructions + the Sacred Blueprint you just looted. Then kill Empath, then Cama and loot the heart. Hurry back to your own temple.

Now, the next step is to report our "success" to the Prophet Urga Van. He should be readily waiting for us in the 100% suppression gas room. As we state that we need to see Vanya and that we have a "delivery" for him, he asks to see it first. So, it's time to hand him Beating Heart! After fumbling around a bit with it, and basically turning it into a bloody mess, he spawns Vanya for us and asks us to deliver what remains of Cama's heart.

So off we go into the 75% gas room again. The chat with Vanya is yet again refreshingly short, as soon as we hand over Cama's slightly battered heart, he hands over the Ice Golem pattern and continues to perform some grisly ritual.

Blueprint must be turned into a Pocket Boss crystal (crystal filled by the Source from an MP + raw novictum you refine) and the result can be used on the Penumbra Incarnators. Just be careful with squishy lowbies and nanoresist noobs, as the Golem can do AOE nukes. 6 Molars will drop from pocket remains.

A slightly dented molar from the great ice golem

You finally can head to Penumbra's Ergo, all north of its icy map, and trade the molar. You then should receive the Sanguine Ring corresponding to your profession ... but before using it on Inferno's portal nearby, remember to do your Lava Protection Boots and Skin Galvanizer quest first or you'll burn in a few seconds !


Last updated on 02.06.2020 by bitnykk
Written by Ukblizzard and Uragon
Do you have questions about this article or found an error? 6 comment(s) - Click here to view them!