None of quests are on timer. They all have at least 1 mill credit reward, xp/SK reward depends on your level.

You start this quest chain by talking to
Stephen Richards
Inferno Burning Marshes - 2482.4x1185.2
(1), located at 2580x1185 Yutto Marshes. To cover his back, first thing he does is hand you Rubi-Ka Tours Standard Expedition Disclaimer. You need to give it back to him alongside 10k credits (don't worry, you'll get your money back soon enough). Once this is completed, he sends you on first sighting (don't get fooled, tour is just another expression for usual bloodbath). 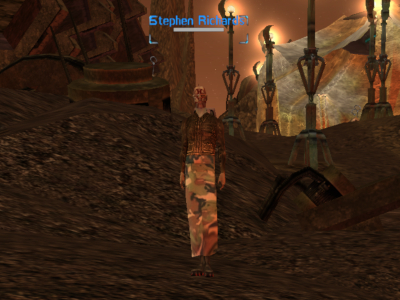 
In order to find desired
Chimeras
Inferno Burning Marshes - 1080x360
(2), travel to 1080x360 in Valley of the Dead (close to Penumbra-Inferno portal).
You need to kill 5 Weakened Chimeras, 5 Chimera Crushers and 1 Aberrant Chimera. Like most quests in this chain, you need to kill in proper order. That can be sorted by either calming mobs or simply killing them all, they respawn fast enough. And like other "bosses" (named mob, the one you only have to kill once) in this chain, Aberrant Chimera can't be calmed.
Once you're done, just return to Stephen for your just reward and next sighting.

Malahs
Inferno Burning Marshes - 2150x750
(3) are located at 2150x750 in Burning Marshes. Easiest way to reach them is simply traveling east, across bridge by Lord of the Void.
This time you need to kill 5 Desolate Malahas, 5 Grieving Malahas and 1 Embodiment of Sorrow. Upon completing, The Song of Sorrow will appear in your inventory.
This you bring back to Stephen. If you pull next quest, he'll also hand you Amplification Unit.


This part of the quest chain can be the biggest bottleneck. You're sent out to kill
Smouldering Shadow
Inferno Burning Marshes - 1000x1200
(4) and loot Smoldering Hair Strand. They are located around 1000x1200 in Burning Marshes (Note: Half of Inferno is named Burning Marshes. This particular spot is a bit west of Petrified Hecklers). Unfortunately, only 3 Smouldering Shadows spawn on a random timer and Hair Strand don't have 100% droprate. Once you're lucky enough to get one it's back-to-tourguide-time.


Once again you'll confront
Chimeras
Inferno Burning Marshes - 520x750
(6), this time Ember ones. You need to loot Ember Chimera Tooth. Unfortunately they don't give up on their teeth that easily and more likely than not, they have Broken Chimera Tooth (wrong item). They can be found on path leading to Vortexoid mobs and behind their camp, approximately 520x750 in Burning Marshes. Should you secure one, return to Stephen with it.


This quest will reward you more than usual 1 mill, you'll get 500k credits more. Guide sends you out to retrieve Coal Lizard Skin and Smoky Salamander Skin. You'll find both types of mobs around pond at base of Drop-off Point, Salamanders(7) usually populate more northern area while Lizards(7) lurk down south to scare newcomers. Neither mob has 100% dropchance and not to spoil everything, I won't list which mob drops which hide.
Reward for this quest is profession specific. If your profession isn't named, you'll walk off with only credits. Traders, with their ability to haggle, get Mudurlurgu Acid Spitter, Engineers get Acid Splash Special and Fixers Nano Crystal (Luck's Capricious Consequence).

Last assignment come as a pair since you're after two dragons with rather special loot. 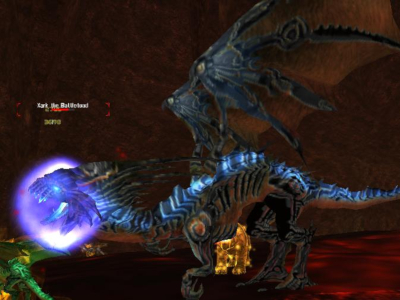 As the name implies, you need to go kill Xark(8), lvl 250 dragon resting in cater of a volcano. Its lair is marked on the big map. It will drop 3xXark's Whiskerneeded for Hold Hell at Bay) and 1x Ignition Chamber of Bacam-Xum (used for making Prohibited Hand-Mortar of Bacam-Xum). Upon his death, the portal will spawn nearby to transport you outside the crater. Xark is on 2h spawn timer. 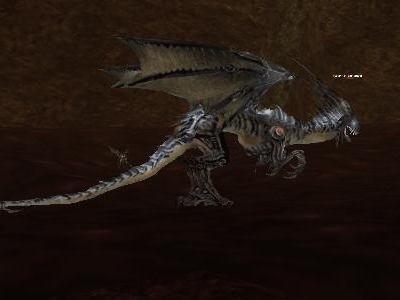 razor is located inside vulcano marked on map. It drops 1x Barrel of Bacam-Xum(used for making Prohibited Hand-Mortar of Bacam-Xum) and 3x Razor's Fang(needed for Hold Hell at Bay). Like Xark, Razor(8) is on same 2h timer.

Upon returning to Stephen you'll be awarded The Raymond Richards III Trophy and Component Platform of Stamina - if you r-click belt it will change mods it buffs.


Last updated on 02.03.2022 by Cariadast
Information originally provided by Trgeorge.
Xark and Razor Spawn timers changed from 7h to 2h Oct 3, 2012 Patch 18.5.2
Do you have questions about this article or found an error? 3 comment(s) - Click here to view them!