Welcome to the Team Fixer Grid Quest manual! In this part we will take you through the steps needed to acquire this gem:

You will need your Hacker Club Member Chip to get started, which also means you will have to have completed the first Fixer Grid Quest.

This part of the quest has a timer, just like the previous quest where you had to run to all of the NPCs, but this time there is a much bigger catch. You actually have to spawn each of the NPC's you talk to in this quest. There are 3 NPCs, all cyborgs, and you will want to spawn these before accepting the quest from Sirocco. First, because the time is short. Second, because it may take a long time to spawn the Cyborgs needed for the quest. Fortunately, if you fail this quest, you won't have to redo Fixer Grid part 1 to do it again, as Sirocco simply hands back your Hacker Club Member Chip. Thus, there is no penalty for failure other than lost time and perhaps having to respawn the NPCs again.

NOTE: Trading the unfinished nanocrystal with each NPC may cause them despawn, so anyone else doing the quest might interfere each other. It is generally not possible to do this quest for multiple people simultaneously.

As for where the Cyborgs spawn, now that you have access to the Fixer Grid you can get to their locations more easily. The spawn points (and the order in which you have to talk to them) are:

To spawn these Cyborgs you will have to kill their placeholders. The placeholders are a plant and animal half-breed called a Lunaspell, which you may have come across before in your travels on Rubi-Ka. These Lunaspells can spawn anywhere from level 100-150, and you may have to kill many of them before the Cyborg actually spawns. They respawn in 5 to 20 minutes, with a 20% chance of respawning as a cyborg. 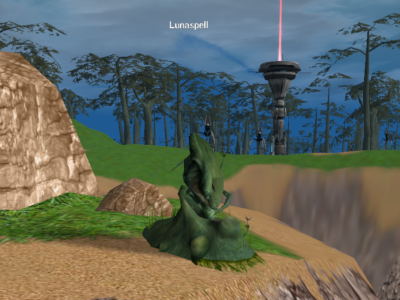 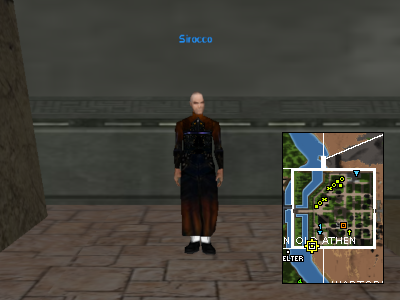 
Now that you have the Cyborgs spawned, you can head back to Sirocco in Old Athens and start the quest. He will want to see your Hacker Club Member Chip. After a long conversation, he will give you an Incomplete Grid Hacker Crystal that you will have to trade with each Cyborg you spawned. Here is the tough part: In order to trade with the Cyborgs, they can not be attacking you or anyone else.

There have been many creative solutions to this dilemma. The most common is having someone calm the Cyborgs so they won't attack. This will often require coordination between two calmers or a single calmer who can move quickly between the two zones. You can also hang back in your yalm out of attack range, creep up at an angle out of line of sight and right-click the Cyborgs to open the NPC chat dialog window. You can also simply charge the cyborg in a yalm, and hope to right-click the borg before it aggros you. Finally, once you reach the level at which the Borgs are grey to you (around level 190), you can talk to them without any aggro at all.

You will need to speak to the cyborgs in the order in which they were listed earlier in this guide: Jumper, Grid-Hacker, then Fixer. After talking with each cyborg, you will need to be careful; they tend to become aggressive against you and may call in backup, with about 10-20 Cyborgs spawning in the immediate vicinity. After trading with them and getting the Incomplete Grid Hacker Crystal back, use Reckless Digitization or Instantaneous Encoding or a similar emergency grid nano to get you out of the location and onto the next one.

After you've spoken with all 3 cyborgs and traded the Incomplete Grid Hacker Crystal to them to have it upgraded each time, you will find yourself to be the proud owner of a shiny new:

and become your organisation's favourite Taxi! (Note: This nano has made every Fixer that has gotten it bitter as stale beer)

You use the Hack Grid Data (Team) in the same way as the individual nano. Your entire team should be standing near a grid terminal. Execute it and a Data Receptacle will spawn in the inventory of every team member. Everyone should quickly pick up the Data Receptacle and use it on the grid terminal and you will each be transported into the Fixer Grid. The Data Receptacle disappears after approximately 10 seconds. Instead of on your team, you may also cast this nano on someone else, and their team will receive the Data Receptacles.


Last updated on 01.07.2022 by Saavick
Information originally provided by Fixerben.
Do you have questions about this article or found an error? 12 comment(s) - Click here to view them!