In this guide we will walk you through the steps to acquire the beauty shown below, which will give you, and only you access to the Fixer Grid.

Before starting this quest you will want to be sure you meet the requirements for to use the Nano Crystal as follows:

There are a few items you should have before starting the quest to save yourself some time:

A Yalmaha or a high level friend will come in handy for you Clanners, since the troops in Omni-1 Entertainment have been upgraded. Even a higher level Fixer may have trouble getting around them.

Now that you've gathered the basic equipment for the quest, we will get you started. First, you will need to head to Newland and speak to a character there named
Ofoz
Newland City - 262x320
. His odd spiky hair will give him away. He's standing in front of a billboard near the West gate. Talking to Ofoz is going to cost you; to get the quest you'll need to bribe him with 25,000 credits. 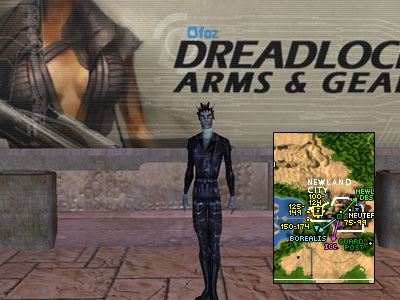 Now we're off to the next player in this little run around.

Next, is a character named Smokey Willy in Omni-1 Entertainment. If you're Clan, since you will get instantly murdered by Unicorn Guards while entering Omni-1 Entertainment from the normal grid exit, you will have to find an alternate entrance to the city. There are multiple ways to achieve entry. You can find a higher level Fixer that will help you by Fixer Gridding you in, a high level Engineer that is willing to Beacon Warp you to Smokey Willy, or taking one of the "Baboons" Whom-Pahs in a player city and walking through the city to Smokey Willy. 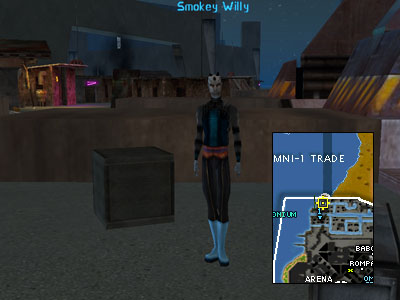 If you go the Fixer Grid Route you should take the Omni-1 Entertainment exit on the first floor. You will find
Smokey Willy
Omni-1 Entertainment - 470x1042
just a smidgen North from the Grid Point. If you're getting Beacon Warped in you can have the Engineer warp you to his exact coordinates of 470,1042. And if you use the Baboons Whom-Pah, you will find Smokey Willy North West from there. If someone is helping you though, don't let them go until the end of the quest. You will need them again to get back into Omni-1 Entertainment a couple more times.

However you decide get there, once you find Smokey Willy you will want to open a conversation with him. Eventually he will ask you to find a Nano Crystal (Instantaneous Encoding), remember we said you should get this before you start the quest. Go ahead and hand this nano program to him, and you will get a Polluted Instantaneous Encoding Crystal in return. 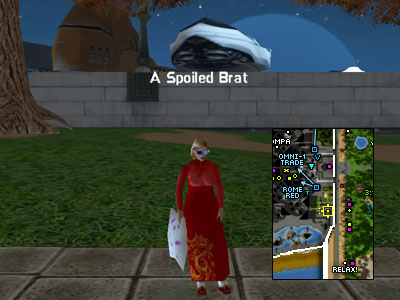 Once you're there, open a conversation with her, and speak with her about her toys. You will want to get a Fancy Doll from her by trading her A Leet Doll, which was another one of the items I suggested getting before starting the quest.

Now we will return to Ofoz and give him the Polluted Nano Crystal. Then he will send you on a quest to "Find some wafer thin nano crystals...".

To do this, you will have to pay a visit to
Brenda Diamond
Broken Shores - 430x2216
by the Twin Altars in Broken Shores. Brenda will ask 50,000 credits for her Homegrown Crystal Wafers. Go ahead and give her the money for the wafers and once again return to Ofoz. 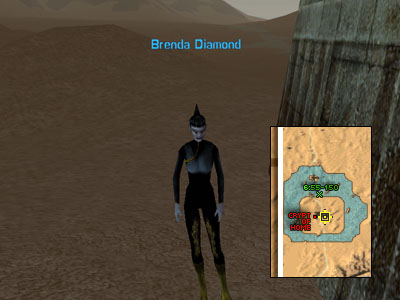 After giving the Wafers to Ofoz, he will yet again ask you for another item. This is another item you should have collected before starting the quest. So once you've got the quest for the Bundle of Nano-Tubes go ahead and trade those in to Ofoz as well. Now he will ask you for an "ICC brand AI processing cube...", and we just happen to already have one! Remember that Fancy Doll you got from the Brat? Well that contains that AI processor, so go ahead and hand that to Ofoz and he will work the Fixer mojo of hacking on it.

Once he has the Doll, you'll get another mission! (woohoo!)

This will be the Final Step of the quest, and you have to complete it rather rapidly; you have 9 minutes for each part of the following steps. So make sure your help is still with you if you had any since you'll need to get back into Omni-1 Entertainment twice more. Once to see Smokey Willy, as well as a dancing Atrox named the Dancing Fool.

This is the order in which you have to go to the NPC's and trade them the Polluted Nano Crystal to gather information and have the Nano Program repaired:

First, Back into Omni-1 Entertainment to see Smokey Willy. He will upgrade the Nano Crystal for you and instruct you to head to the next person.

Second,
Sally Tall
Newland Desert - 1480x2760
, located in Meetmedere right along the edge of the Tall Cliff, close to Uncle Bazzit's Shop. And before you ask, no, she isn't tall. It's just her name. 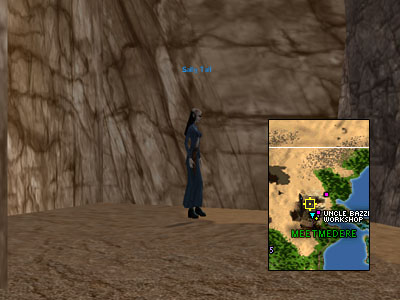 Third, we will head back to Brenda Diaond in Broken Shores by the Twin Altars, the Crypt of Home entrance. She will look at your palm and make a magic sign, but she won't sell you a bottle of Love Potion No.9, she will send you off to your next target.

Fourth, we will go see Coco. Coco is easily found in West Athen in The Cup, a small cafe you will find West from the Grid Terminal, both in the same street. This place shouldn't be too heavily guarded, so omni players shouldn't have much trouble getting into The Cup: just exit from the West Athen grid exit, run west and quickly turn right into the bar. Other routes, such as via Old Athen, are much less safe. Coco will upgrade your crystal and speed you on to the next NPC. 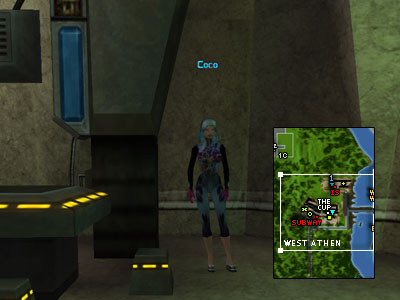 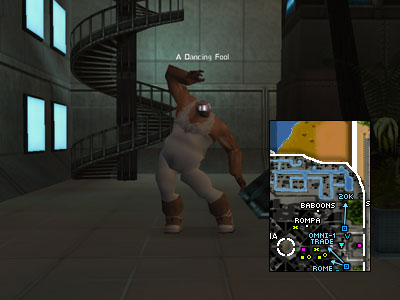 Finally, you will need to speak with Sirocco, who you can find in Old Athen. This part may be tough for those omni fixers trying to complete the quest. 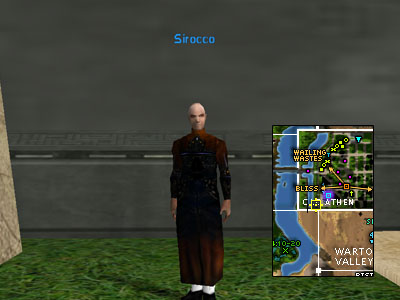 Usually, Ramon Bauer of the Vanguards clan is guarding the grid terminal. There are a few alternate methods of entering Old Athen though. First, you can have a friend Fixer Grid you in, or an Engi Beacon Warp you close to Sirocco. You can also use the West Gate into Old Athen and clinging along the wall to the right. Make sure you stay close to the wall, and don't get aggro from the guards a little to the East. You can also use a Whom-Pah, however, there guards do occassionally patrol there, so you will want to have your yalmaha equipped and fly up as soon as you zone in to Old Athen just to make sure you don't die.

Which ever way you get there, once you speak with
Sirocco
Athen Old - 282x210
he will give you two rewards:

The Hacker Club Member Chip will allow you to come back later and do the second part of the quest.


Last updated on 01.03.2020 by Saavick
Information originally provided by Fixerben.
Do you have questions about this article or found an error? 7 comment(s) - Click here to view them!