Feedback: Feedback-Thread
You can find details on how to get to Biomare, in our Encounter Guide: here. The mission is different for Omni- and Clan sided players. The only difference is 2 of the NPCs that you must talk to to initiate quests are different (scroll to the bottom of the guide for details). Neutrals can choose whether they wish to start the quest from the Omni or Clan NPCs.

Warning: If you want the final reward (Collar of Amplification) you MUST start the mission with Dr. Hercules Lincoln. Apparently you can return to him even after you have run quests for Linda Osmos and you'll get a simple return item quest.

There is also a daily mission which leads you down this dungeon and also gives you the opportunity to loot those items.

⇑
Omni Investigation Mission
AKA "How to keep the guards from aggroing you."


Dr. Hercules Lincoln
Southern Artery Valley - 1135x2375
is situated near the Whom-Pahs in Outpost 10-3 (Pos: 1135, 2375). Upon speaking with the Doctor, he will give you a mission to deliver a report to NPC Efficiency Expert Linda Osmos inside Biomare. 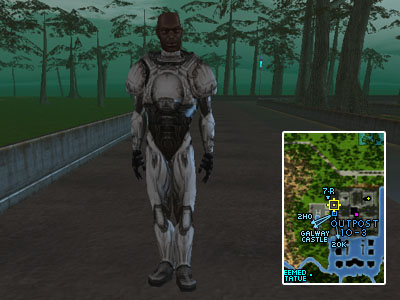 Mission Log:
"Omni-Tek has been able to place an informant inside the Biological Materials Research facilities. Deliver the Systems Monthly periodical to Efficiency Expert Linda Osmos and return immediately with the weekly progress report she will give you." 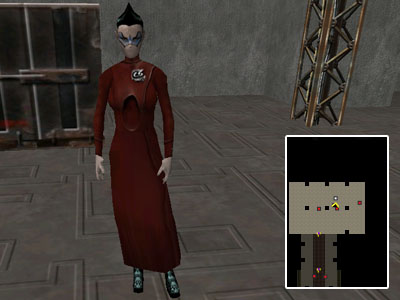 ⇑
Linda's Missions
Linda Osmos will give you 4 missions in total, but you have to return to her after completing each one. They revolve around cleaning the scum from the sewer pipes. If you don't know where the sewers are, read her dialog, she tells you.

Her tasks are as follows:

The reward upon completing her tasks is a blank security card and 25k xp.

She will also give you a report to take back to Outpost 10-3.

Make sure you have the "Deliver Systems Monthly" mission running. You WILL NOT get the Weekly Report to return if you don't. This will break the mission chain, and you will not be able to continue although you can still get the security card and upgrades. To continue in the mission chain you'll have to do her missions over again to get report. Go back and talk to Dr. Hercules Lincoln.


⇑
Now to get your security clearance:

Linda will tell you to find the Maintenance Supervisor Johnsson under the bridge after the "golf ball" teleport. 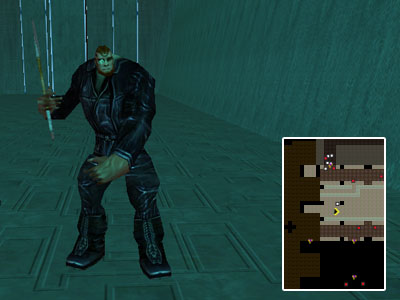 When you kill him, loot, and when his corpse rots, a encoder is left behind. Use your blank card on the encoder on the ground (you can't pick it up). The encoder stays around for about 5 minutes so your whole team can get their clearance cards. 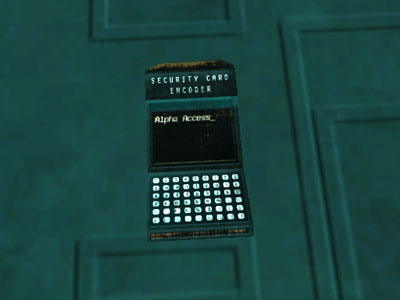 To upgrade the card, use a "damaged beta" card on the alpha card to get Beta clearance. Ditto for gamma on beta. Equip to HUD 1 for unmolested access to Biomare.

Each card is good for one level of Biomare. The alpha card works up until the first golf ball, beta after that, and gamma up to the final level including the mutants. There is a Delta version in the item database, however in all the years Biomare has been around no one has ever reported finding one.


⇑
Where to find damaged cards
The first place I found Damaged Beta cards was in the hallway after the last mutant cave, dropping from security guards/officers. Damaged Gamma cards come from Bodyguards after the Golf Ball into the directors area. So it seems that you find them in the area after that level of clearance is useful. Which is nice because once you get through an area safely, you'll get a pass to get back through it.


⇑
Rescue the Analyst Mission
After returning the report to Outpost 10-3, you have the option to start a "repair" mission. You'll get an encrypted key in your inventory.

Mission Log:
"In the Hangar area of the Biological Materials Research facility in The Longest Road, a data analyst is hiding, waiting for you to help her to get to the nearest emergency exit."

Find
Theresa Cameron
- 255x35
, and help her get to the emergency exit in the hangar. 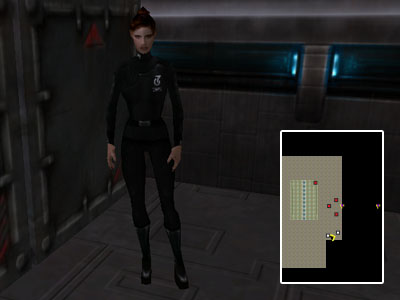 (Be very careful of your reflects around her. On one team, she hit a enforcer with a 50k nuke after she took reflected damage. BBQ 'trox. I think the place still smells.)

She is in the SE corner of the hanger (Pos: 255, 35). After you speak to her, she begins walking to the emergency exit. Now anything in the hanger will aggro you. Best to clear it before hand. In addition new mobs will spawn from the entrances at certain points, be sure to not let them kill Theresa. When she meeps out, she leaves behind a encrypted datacube on the floor. Use your encryption key on it to get a decrypted datacube in your inventory. The datacube will stay on the floor for about 5 minutes for the whole team to finish the mission.

Now you have a return mission to deliver the decrypted datacube to Dr. Hercules Lincoln. When you do so, you'll have the option to do another mission.


⇑
Tissue Sample Mission
This is really 3 missions since you hand in each piece separately. Dr. Hercules Lincoln wants a cardiac, pulmonary, and liver sample from the mutants.

If you make a quick run through the mutant caves to get your parts after walking Theresa Cameron out, you'll be time ahead here.

Hand in the parts, and get 60k-90k xp for each part. Now you'll have the option to continue.

Mission Log:
"Go to the laboratory area in the Biological Materials Research facility in The Longest Road. There should be computers with stored information on the nano particles used in the testing. 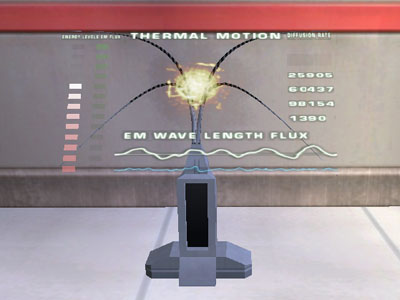 Use the Secure Terminal Hacking Protocols to get access to the computers. When you have been able to access the sensitive data, return to Dr. Hercules Lincoln."

These terminals are after the mutant caves and exam room and through yet another golf ball. Use the hacking tool on the computers in the sides of the room until you get a GREEN (Sensitive Data) paper.

The purple paper (Routine Data) is just a decoy. Just keep using the hacking tool until a green paper is in your inventory, you might wind up with several purples, no big deal. Return to Dr. Hercules Lincoln with the green papers, and you get the last mission.

Mission Log:
"Go to the Biological Materials Research facility in The Longest Road. Find the lab director and kill him. This will send him to a reclaim terminal at an Omni-InternOps location where he can be questioned about his recent actions and possible connection to the viral outbreak." 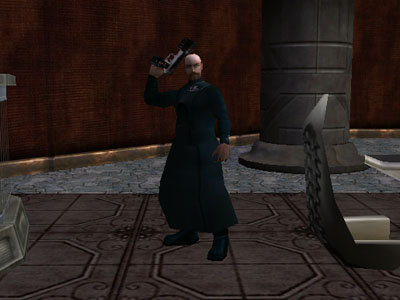 The Director is in the usual place, and will probably be up when you get there. A lot less traffic there now. Also he usually spawns a few Executive Protectors (Level 80) which look like floating eyes. They hit pretty hard for radiation damage, and will respawn if killed - best to mezz them instead. Since he's not being insta-killed on spawn anymore, most likely there will be 2 bodyguards in his office too. So count on the Director plus at least 4 adds.

Once the director is dead each team member will find a "Director's Identification Card" in your inventory. Return this to Dr. Hercules Lincoln and get your reward: Collar of Amplification and 125k xp. 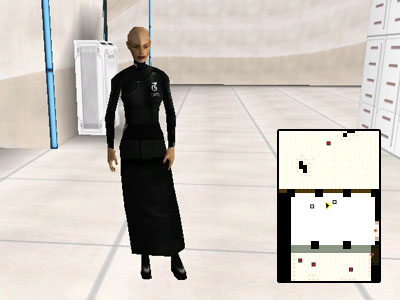 Mission Log:
"Lab Assistant Evelynn Shead has requested your help in shutting off the disposal device known as T.I.M." 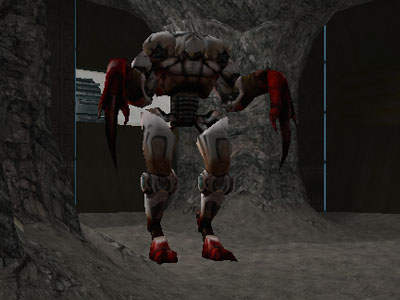 
⇑
Killer Cargo Bot Mission
After doing the security clearance mission, Linda Osmos has one more job for you. Head to the hanger and kill 3 Heavy Cargo Hauler Bots. For 3k cash/60k xp.


⇑
Miscellaneous
Rik-Rak is a hall mob on the way to T.I.M, when you attack, "Lab security devices" come out of the ceiling over the one Rik-Rak is fighting. These things root/stun the player/pet they're over. With a team, someone else can be killing the security devices, to free the main tank. He drops the Assault-class tank armor 100%.

The Blind Eyemutant on the bridge after the Chemical Vindicators drops the Medic Tank Armor. I think this is close to 100% now.


⇑
Recapture Beacon
This Beacon is any regular attender of Biomares dream come true! No more running, just warp yourself straight to the door! As long as you are standing in Borealis when you activate it anyway!!

To get the Recapture Beacon, you need a SD Power Core, which drops from any robot mob and also T.I.M.

When you have found the Power Core, you will need to take it into the section of Biomare with the Lab Director and TIM, in the West round room (closer to T.I.M). In there is a Containment Unit System Droid. 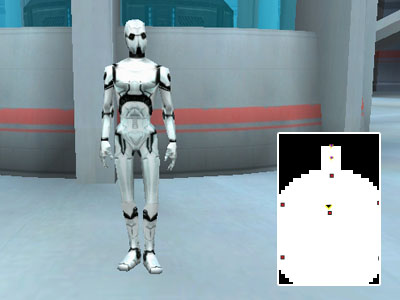 Trade him the core and he will power up and start opening the containment areas there. 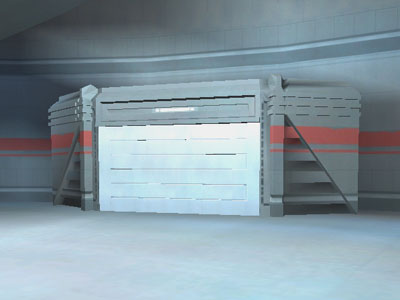 The Clan missions are very similar to the Omni missions, only with different NPC to talk to. The same warnings apply.


⇑
Clan Investigation Mission
AKA "How to keep the guards from aggroing you." 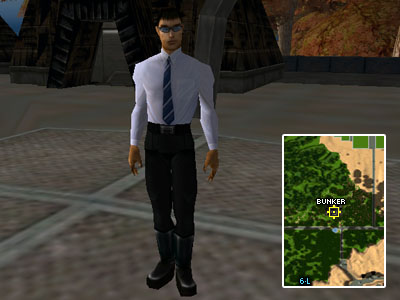 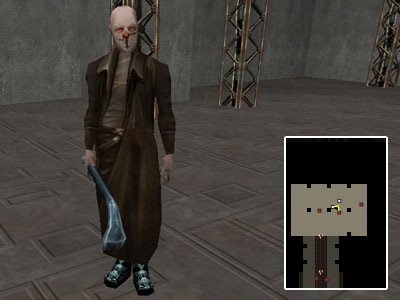 From here the mission progression is the same as for Omnis, just report back to Maintenance Worker - Rodriguez each time until you have the blank card and report to return to Ace Starr.

The remaining missions are the same as for Omni, just return to Ace Starr each time.


Last updated on 08.27.2022 by Cariadast
Information originally provided by Briefcase at the Official AO Forums.
Additional information provided by Windguaerd, Weeping Willow and buelly.
Added information, pictures and maps: Ukblizzard
Beacon Information added thanks to Tankadin.
Security Clearance tradeskill stuff added by Afreng
Do you have questions about this article or found an error? 3 comment(s) - Click here to view them!