New? Wait...New Inferno missions? What happened to the Old Inf Missions where we pull from the Essence Hunter in the Garden and run to the cave he designates to us?


If you really like the old-style missions, no worries. They are still there and can be pulled by a 210+ character in a team of 2-6 from the Essence Hunter for Clan and the Soul Devourer for Omni in the Inferno gardens! Just be ready to put your running shoes on as these missions may be located in any of the numerous locations they assign. 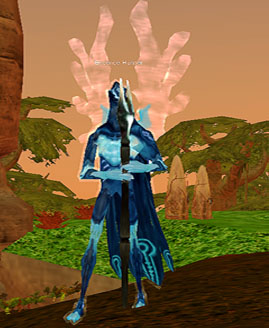 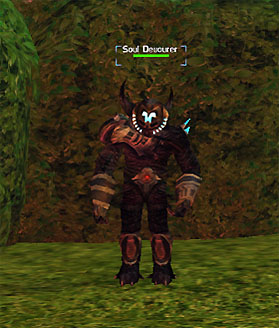 (Note:
⇑
If you pull an Old In Mission in an area you do not want to travel to, you can delete the mission and re-pull until you get a more desired mission location. Just be sure to update your team, (right-click the mission in your mission window and select Update Team when they are in the same zone area), so they may enter the correct mission.)


Why the two different style missions then?

Well, in early 2014 a poll was released by FunCom asking players to vote for a number of new and upgraded encounters to be created. The one that was at the top of that poll response was "New Shadowland Missions". The intention of the new content was to provide additional options for players seeking levels and research within Inferno. The New Inferno Mission was released on November 12, 2014, in the new area named Xan Reliquary located just outside of the Ergo cave area.

⇑
The Retainer of Ergo


To start your new adventure in the Xan Reliquary you need to speak with The Retainer of Ergo, who is located near Inferno's Ergo. 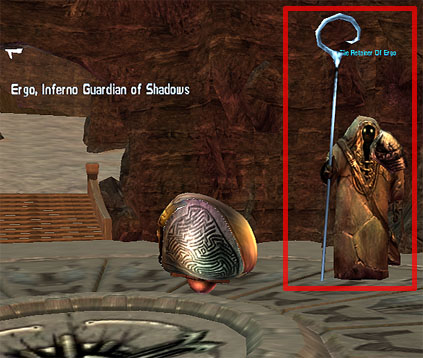 The Retainer of Ergo

This Yutto will inform you of a recently opened chamber in a local cave that has been lost and forgotten. He talks about a strange corruption that seems to have taken hold of this chamber, and has begun to pour outward seeping into the very stone of the cave. The old energy that hums through the walls has begun to attract all forms of creatures lurking in every corner both above and below the scorched wastelands of Inferno.

During this conversation, you will feel compelled to ask him if there is "anything you can help him with"? While he replies that he needs nothing from this world, he mentions there is a matter that deserves further investigation regarding the newly opened cave chamber and asks if you're willing to help. Unable to resist, he then gives you several options.

The Retainer of Ego will provide you with the options to defend Factioned Instances of Redeemed or UnReedemed mobs based on your current faction for those wanting to earn faction, and stick to your side. In addition, there is a mission option that does not involve sided faction alignment at all. With this choice you can also play a mixed faction team and battle the horrors of the factionless mobs together, allowing players of any faction to team up against the horrors of the Brink!

Similar to the older Inferno missions, you will be able to choose to play difficulty levels of Easy, Medium, or Hard and will pit you against mons designed for that level range.

I will deal with only the weakest aversaries (Easy)
I will challenge these invaders, as long as there aren't too many (Medium)
I will purge the temple of any and all assailants (Hard)

Once you gather your team of 2-6 and all have pulled the mission you determined you are up for, it's time to head to the Xan of Reliquary cave.

*NOTE: Every team member must pull the same "defend" option and the same "difficulty level", so be sure to determine this prior to pulling the mission. 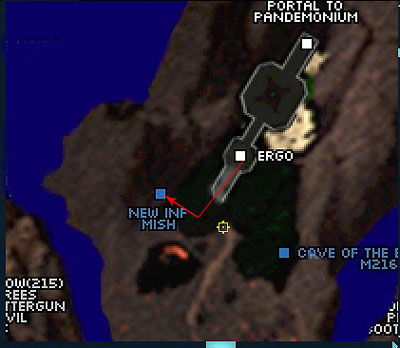 The entrance looks a lot like any typical Inferno cave entrance except it's almost hidden in the corner. Once you reach it, however, you will notice a small blue dot at its entrance. This will verify you are indeed in a team and have the mission pulled in your mission window. If you don't pass muster, you are denied entrance and have to correct the error made before you may enter!

*NOTE: Additionally, if you are trying to re-enter the instance after you've completed a previous mission, remember you must break and reform your team to do so. 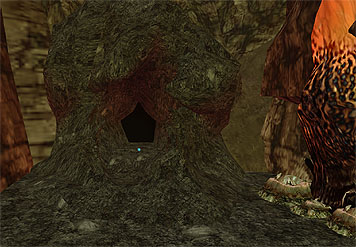 Once inside you realize you aren't in an Inferno Old mission anymore, Toto! Instead of the tight hallways, you are used to, it opens up into a huge cavern with its own swirling vortex sky, erupting volcanos, frozen HEcklers, and the mark of the Xan carved into the front wall above the entrance! (can be easily seen as you leave). 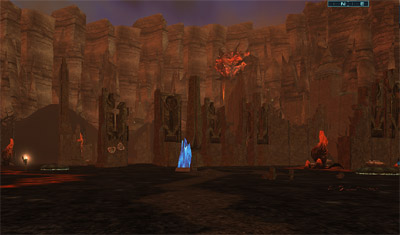 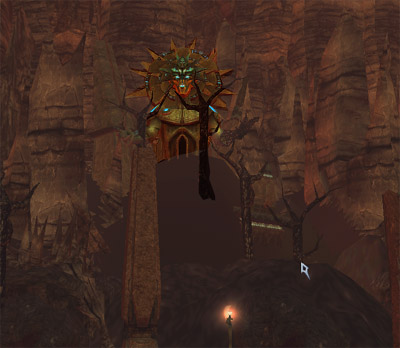 Among the marvels within the cavern, you will also find some creatures that have been attracted to the energy of this newly opened chamber before you even begin your mission! At the front area of the chamber, you'll be greeted by a 220 Infernal Vortexoid, 220 Burning Shadow, 220 Wailing Spirit, 220 Bound Dryad, and 220 Icy Shadow that wander anywhere from the entrance to the middle of the chamber.

While they aren't essential to the mission to kill, they and several others also wandering about toward the back have the potential to cause problems for some players, especially lower level. The choice to pre-kill or ignore any or all of these mobs before you start the actual mission is your team's to make. Be warned that they will, when within range all attack on sight and if they have not been eliminated by the time the additional spawned mobs begin attacking the spirits, they are likely to cause issues and need to be killed at that point.

Once your team decides on how to handle these wandering, desperate Source junkies, it's time to start the actual mission.

⇑
One Who Obeys Precepts


In the center of the chamber, you will see a monument attended by a yuttos. One Who Obeys Precepts has more of the story to tell you. Only one team member needs to speak to him. Don't worry though, he's rather short and sweet. 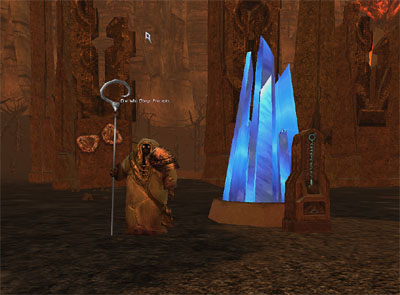 One Who Obeys Precepts

He does let you know that long ago, this was a Xan temple inner sanctum, and the rituals conducted here have been lost over the ages. He goes on to explain his sole purpose for being there is to call forth the powers that can restore the chamber, the Guardian Spirits. However, to do so will cost him his very life.

He asked that once he sacrifices himself that your team defend the three Guardian Spirits that will appear on the currently Empty Platforms, until their ritual has concluded, and wants to know if you are prepared for this trial? 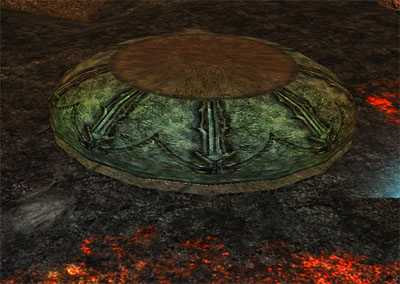 You may have noticed the empty platforms as you entered or explored. There are two in the front of the chamber and one located in the back, which is blocked from immediate view by a wall.

On replying to One Who Obeys Precepts that you are ready, he will sacrifice himself and disappear. In his place, three spirits begin the ritual on each one of the three round platforms located inside the large chamber. 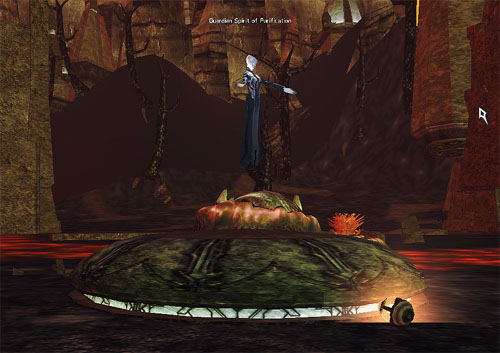 The ritual itself continues through an extended number of waves of Inferno's worst mobs. During which your only job is to make sure that at least one of the spirits survives to complete the ritual!

*NOTE: Some teams choose to let one or two Spirits die so they only have to protect just one and not run around the playfield. As long as one Spirit is kept alive, the team will still receive the reward

The number of waves, mob types as well as mob levels depend on what you pulled from The Retainer of Ergo.

The difficulty of the mission will determine both the level of the monsters encountered and the overall quantity of adversaries. The harder the difficulty, the more waves of mobs, the more boss mobs, higher level mobs, the more chance at loot, the greater the rewards can become, but the longer it will take to complete.

This encounter is broken up into several waves of attackers. Each of the waves will end with a miniboss which has chances to drop better quality loot. The boss loot can be anything found in Inferno on the dyna bosses. The dynas are random in each mission and you may get different dynas mobs with every missioned or pulled, or the same kind.


Each version of this encounter offers an XP reward which is based on the level of the player, similar to a Daily Mission reward, with larger rewards coming from the more difficult missions.


When the last boss is defeated, the ritual is over, the Guardian Spirits disappeared back into the ethers they were called from, and your team receives a reward. 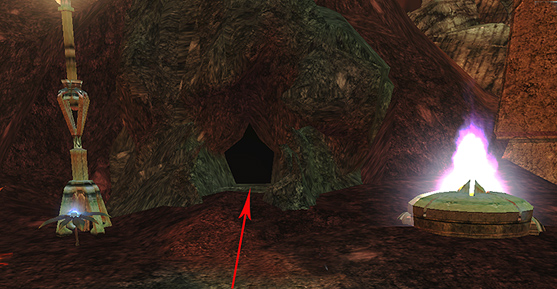 To exit the Reliquary you may use the exit where you entered, or simply break team to be teleported directly outside.

These missions have no lockout timer and may be run back to back, as many times as you wish. Just be sure to break and reform the team each time before re-entering the mission area.


There is a secondary encounter in the Xan Reliquary in the event all the Guardian Spirit die before the ritual is over. To learn more about it, check out our guide on Umbral Spectres.


Last updated on 07.26.2022 by Cariadast
Written by Cariadast
Do you have questions about this article or found an error? 5 comment(s) - Click here to view them!