Feedback: Feedback-Thread
Note: Colored numbers after NPCs are marked on the Inferno Quest: Map.
For the parts of this questline where you need items to trade to the Yuttos, you can pick them up before starting the questline if you wish while you are out exploring Inferno.

You start this questline by talking to a Yuttos called One
Whose Words Happen to Rhyme
Inferno Burning Marshes - 900x180
(1) located in the Valley of the Dead at the start of Inferno.


⇑
One Whose Words Happen to Rhyme (1)
Location: 900 x 180, Valley of the Dead
The easiest way to reach this yuttos is via the Penumbra Sanctuary statues. 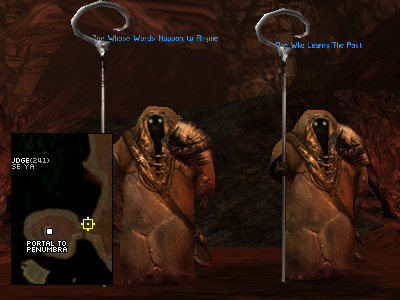 One Whose Words Happen to Rhyme. 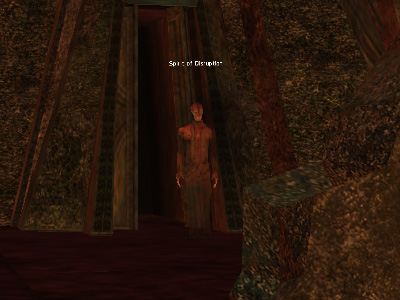 Once you have killed them all in order and returned to the Yutto, he will reward you with A Never-ending Being of Light and send you on to the next part of your quest.

A Never-ending Being of Light 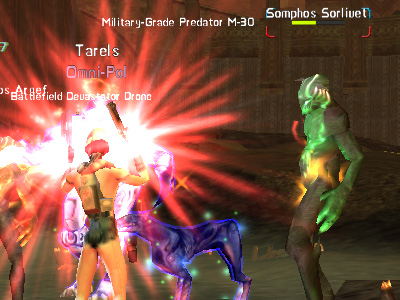 You need to deliver these nuclei to a different Yutto called
One Who Asks The Unasked
Inferno Burning Marshes - 1190x755
(4).


⇑
One Who Asks The Unasked (4)
Location: 1190 x 755, Valley of the Dead.
This yuttos will take over sending you to quests till end of this chain. 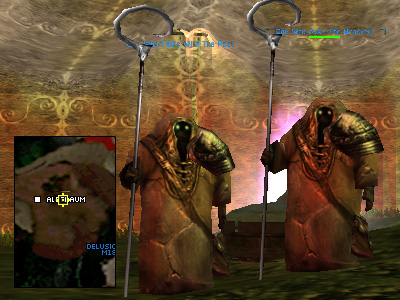 One Who Asks The Unasked.

⇑
Lost stories
For this next part, you need to talk to a spider called
Anansi Gopher
Inferno Burning Marshes - 855x722
(5). It is located at 855 x 722 in the Valley of the Dead (start of ramp that heads up towards the Drop-Off Point). 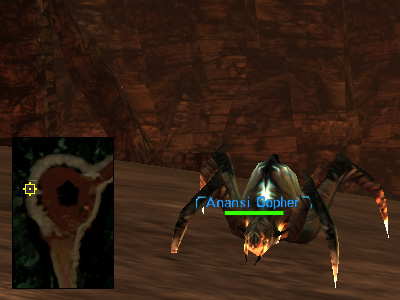 When you find the Anansi Gopher, you should ask it about Yuttos stories. When you do, he will give you The Tale Of The Stubborn Yuttos. Return with your device to One Who Asks The Unasked.


⇑
Capture the essence
When you return to the yuttos and deliver the The Tale Of The Stubborn Yuttos, your mission will update.

For your next mission, you will need to kill 5 Meditating Spirits and loot 5 Essence of Insight from their corpses (level 205 mob), 5 Conflicted Spirits and loot 5 Essence of Primal Understanding from their corpses (level 205 mob) and 1
Spirit of Coercion
Inferno Burning Marshes - 2035x1185
and loot 1 Essence of Clear Thought from its corpse. (6). You do not need to kill them in order, you simply need to loot them along the way. 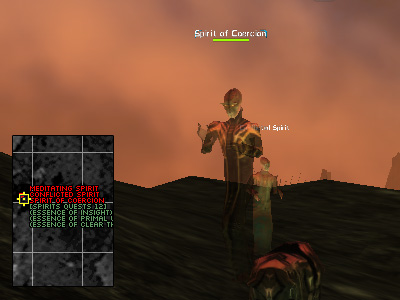 These spirits are located around 2035 x 1185 in Burning Marshes.

Each of the 5 Essence of Insight should be shift-right-clicked together to make a Essence Mesh of Insight.

Trade the Essence Mesh of Insight, Essence Mesh of Primal Understanding and your Essence of Clear Thought to the yuttos. You will receive a Stabilization Unit as the reward for this part of the questline.

⇑
Chasing legends
This part of the quest is a bit tricky. One Who Asks The Unasked gives you Blood Of The Innocent and sends you out to use it on a proper Tombstone and kill Spirit of Malice (level 210 mob)(7). Unfortunately, the Blood can only be used on one
Tombstone
Inferno Burning Marshes - 2330x1390
(they are located at 2330x1390 in Burning Marshes) and it will only work on the right one. 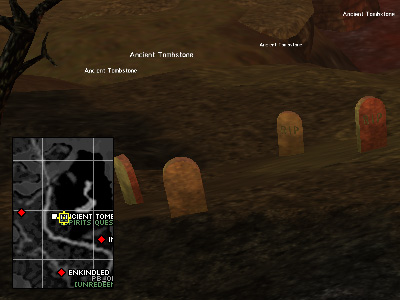 One way to overcome this issue is to keep initiating conversations with Yutto until you have 7 samples of Blood in your posession. You can then use a new one on each of Tombstone. The alternative is to find the right Tombstone (You can see it is the right one from its vicinity text :

The last line is important as that tells you that you found the right one. After you have killed the Spirit of Malace, your mission should update and it is time to return again to One Who Asks The Unasked.


⇑
Joining the hunt
Your next mission is to go and locate Relentless Spirits (8). You are looking for an Essence of Perception that drops from their corpses. 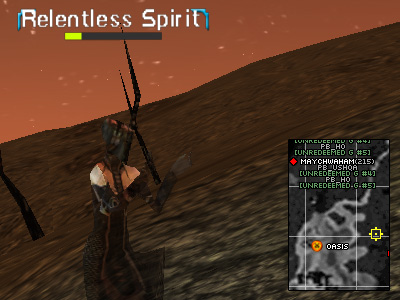 Unfortunately the Essence of Perception does not have a 100% drop rate. But the good news is that there are two places to find these
Relentless Spirits
Inferno Burning Marshes - 1430x375
. One is located at 1430x375 in Burning Marshes (The spirits there are ql 200) and the other location where
Relentless Spirits
Inferno - 2230x2170
can be found is at 2230x2170 in Inferno (The spirits there are ql 220).


⇑
Snake Eyes
Now the Yuttos wants you to bring him an Ashen Viper Eye. As the name indicates, they drop off Ashen Vipers(9), and yet again, it's not a 100% drop rate. 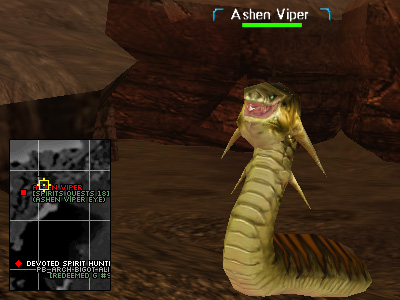 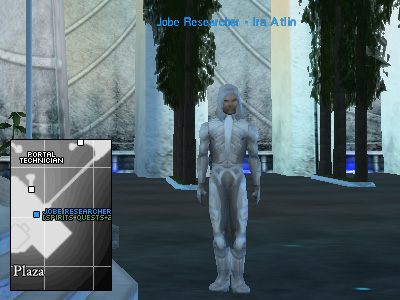 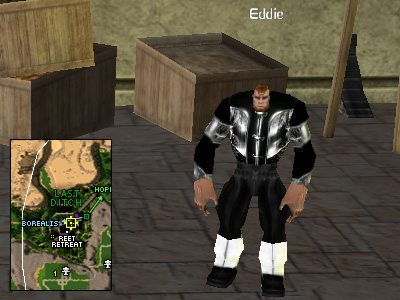 Eddie
Stret West Bank - 1200x2820
, located at 1200x2820 in Stret West Bank (just in front of Reet's Retreat) has a new item for sale. For a meager 1k credits you can buy a Cryptovariable Deduction Algorithm from him. You will not find this in his normal shop, you will need to initiate dialog with him -- “What do you do?”.

Bring this item back to the Yutto. On returning it, One Who Asks The Unasked will now request some encrypted data. In this case a Compact Message Datadisc will suffice! You can loot these from corpses of
Courier Lizards
Inferno Burning Marshes - 1820x1170
(11), located at 1820x1170 in Burning Marshes. 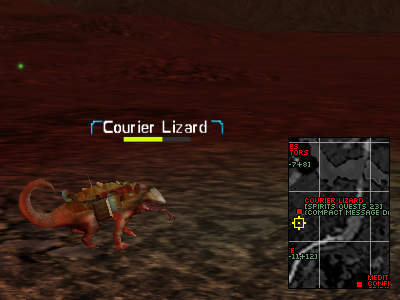 On looting the Compact Message Datadisc, head back to One Who Asks The Unasked. Your mission should update to the final steps for this questline. 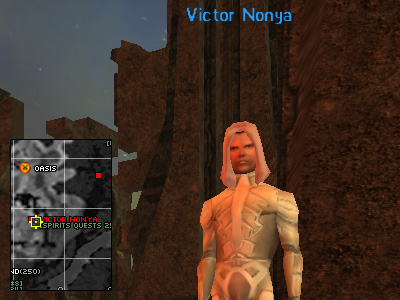 Once you tell him that the Yuttos know what's he up to, he will spawn 3 Engineeered Shades and an Advanced Shade Prototype and attack you. 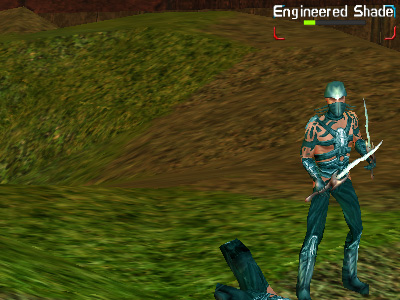 Since Victor warps back to his spot and changes his appearance, the best strategy is to pull the Engineered Shades first and kill them. This means you can center your attention on Victor. You need to make sure to not kill Victor too fast, he needs to be able to change his form, the final time he changes his form he looks like an oversizsed Engineered Shade. Bringing a team with a calmer helps a lot with the adds you may encounter in this area.

When you have killed Victor Nonya and his 4 Shades, return to the Yuttos. You will be rewarded with:

Last updated on 01.08.2021 by Saavick
Information originally provided by Trgeorge.
Layout changes and extra information by Ukblizzard and Uragon.
Do you have questions about this article or found an error? 5 comment(s) - Click here to view them!