One of the most complex tradeskill tasks for the average tradeskiller is implant creation. There are so many clusters and variables that a neophyte can easily be overwhelmed. This guide will attempt to cover, in great detail, everything you need to know about implants (and probably a lot of stuff that you don't need to know, as well!).

Implants can modify pretty much every skill in the game. They generally require an ability and some amount of treatment to equip, with the help of a Surgery Clinic (portable or otherwise). There are 13 slots for implants: 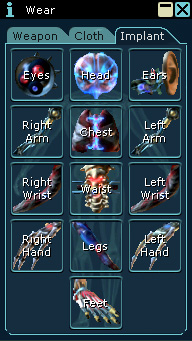 Each implant can be fitted with up to three different clusters, each of a different grade: Shiny, Bright, and Faded.

Shiny clusters give the highest bonus and are the hardest to combine. The icons have three "dots" inside them.

Bright clusters are in the "middle" in terms of bonuses and difficulty to combine. They typically have 60% of the bonus of the Shiny cluster and have two "dots" in the icon.

Faded clusters have the lowest bonus (40% of the Shiny bonus) and are the easiest to combine. The icons have one "dot" in them.

Each individual skill/ability/bonus has a single Shiny, Bright, and Faded cluster, and thus, can be fitted to three slots in various different implants depending on the skill or ability. There is a fair amount of overlap between certain bonuses, and thus you will often have to choose between several equally viable options. Note that if an implant has an "empty" slot, this slot can be filled at any time with a cluster of the appropriate grade.

Basic Implants can be purchased in varying QLs from the Implant Booth at any general store:Basic implants above QL 125 cannot be bought in stores, but can be rolled on missions. The trade department of each general store also has at least one booth which sells random QLs of implants.

The bonus that is received from an implant is based on the QL of the implant, rather than the QL of the clusters inserted. In other words, there is no point to inserting a QL 200 cluster in a lower implant, unless that was all that you had available; you won't get a higher bonus for using a higher cluster. It also means that the bonus listed in the cluster description is, by and large, worthless.

The basic implant combine is simple. Just combine together the Cluster you want with the implant you want in the tradeskill window:The difficult part is determining how much skill you need to insert a cluster into an implant...

Each skill and ability has one (and only one) cluster for each grade, and each cluster grade is in a different location. This means that you cannot have the same skill in two different grade slots in a single implant, although you can have three separate implants, each with a different grade of cluster for that skill. Having all three grades of a skill or ability implanted is often called "Triple Implanting" that skill or ability.

Note: Max Nano and Nano Pool both increase Max Nano, and can both be implanted in different grades in the same Head, Chest, or Waist implant.

Instead of manually calculating all the requirements needed to insert various clusters into implants, most people use a program or website to calculate everything. It saves a lot of time and effort (as well as headaches).

Some popular implant designers include:

When inserting a cluster into a basic or partially-filled implant, the QL of the cluster has be at least a minimum QL depending on the grade of the cluster:The clusters can be any QL above the implant's QL, as long as it is above the calculated minimum value. Note that because of QL bumping, you may want to add a few QLs to your minimum threshold for cluster shopping, if you intend to implant multiple clusters at one time into the same implant.

When shopping for clusters, keep in mind that you can shop in the trade departments of other faction's stores.

Since the 18.7 patch, neutral Fair Trade stores no longer sell clusters. Instead, clusters are now available in specialised implant stores. As an example, there is one accross the street from Fair Trade in Borealis, and another one in Newland City near the West gate. These shops sell clusters in a few fixed QLs: 25, 50, 100, 200 and 300. Note that QL 200 Clusters are 5x more expensive than in sided stores, but it may still be worth it to avoid shopping around for a good QL.

QL Bumping is limited by the QL of the implant being created:Note that if you repeatedly clean and bump the QL of an implant, you can get the implant to steadily rise in QL, to a limit of QL 200. Many people use Faded clusters for this implant raising cycle.

Jobe clusters are special clusters that are occasionally found in missions and sold in implant stores. They used to be sold in Jobe by a gentleman named Christen "Techie" Thorwaldsen, but this is no longer the case since they became available in shops on Rubi-Ka. Despite the Shadowlands-related name, Jobe clusters are usable by froobs. Aside from the usual Nanoprogramming skill needed to implant the cluster, they also require another tradeskill, depending on the type of cluster:
*Add All Defense/Offense adds a fixed value, not a percentage
** All % Add Damage adds a fixed value, not a percentage. There is a cluster for every damage type except Cold.
*** Nano Delta clusters appear as "A Shining/Bright/Faded NanoCluster of Nano Regeneration" and do not have a "Jobe" tag. Also, Nano Delta clusters have lower skill requirements to install, requiring x5.25 for Shiny and x4 for Bright and 2.75x for Faded. Nano Delta clusters are the only clusters that can be rolled on missions and can come in QLs that are unusable due to being too low for a QL 99/100 implant.

Jobe clusters cannot be inserted into implants below QL 99. They can be inserted in QL 99 implants only if the result will be bumped to QL 100. If you receive a message to state that the combine is not possible, you need to increase your nano programming skill enough to ensure that the bump to QL 100 can happen. Without this the combine will fail.

Implants above QL 200 are called "Refined" implants. These implants scale linearly above QL 200, although the ability and treatment requirements are on a much higher scale. Refined implants are usable by froobs and follow some special rules. Refined Implants can only be combined with refined clusters (clusters above QL 200) and are title level locked at TL5 for QL 201-250 and TL6 for QL 251-300. They cannot be cleaned. QL 300 Basic Refined Implants and clusters can be bought in implant stores, but for a very high price; up to tens or even hundreds of millions. Alternatively, Basic Refined Implants and refined non-Jobe clusters can be blitzed in missions, and they are common drops from Primus camp mobs. Refined Jobe clusters can be found found as rare chest loot in mission (with the exception of Nano Delta, which can be rolled). Fully-made Refined implants occasionally drop as chest loot in high QL missions, as well.

Implants can be cleaned by using an Implant Disassembly Clinic. This process requires x4.75 in Breaking and Entering and x1 in Nanoprogramming skills of the implant's QL. This process removes ALL clusters (you cannot selectively remove just one or two), and gives you a basic implant of the same QL. Many people commonly blitz already-filled ("dirty") implants above QL 125 and have them cleaned afterwards. Refined and Jobe-cluster modified implants cannot be cleaned.


Last updated on 05.10.2020 by Saavick
Written by Hahnsoo
Do you have questions about this article or found an error? 13 comment(s) - Click here to view them!