Feedback: Feedback-Thread
On the Battle Station, each faction has to fight to capture control points. All participants in a Battle Station instance will gain Victory Points, the winning team obviously gaining a higher proportion over the losing team. Victory Points can be used to buy items such as Ofab armor and Ofab weapons, as well as nanos and other special items as well from the vendor machines in the OFab Shop located in the Battle Station hub.


⇑
Introduction
The goal in the Battle Station is to acquire more points than the opposing team. A team receives points by capturing control points. There are two teams. Red or Blue. Neither of these is associated with any faction and a player may join either color team regardless of faction. 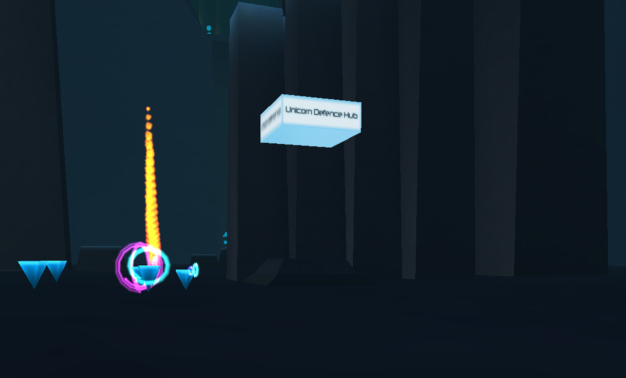 There is also one Battle Station Transportation Control Terminal located in ICC. 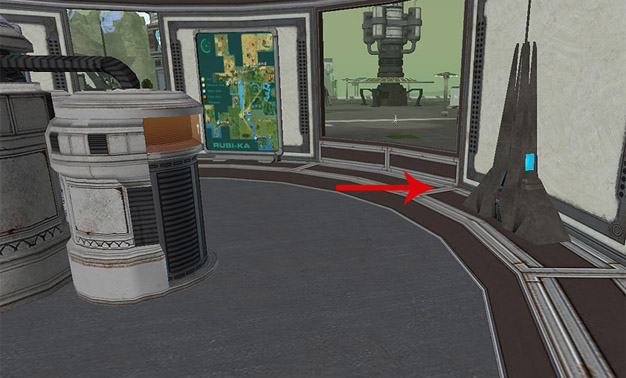 ⇑
Entering the Battle Station
Once you enter the Unicorn Defence Hub aka Battle Station Central Area you will see many terminals with level ranges on them. 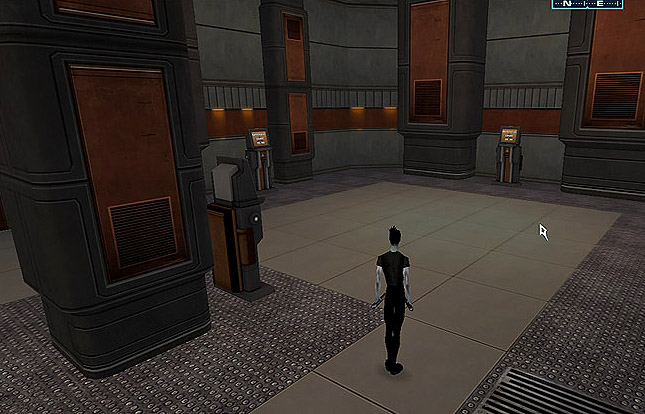 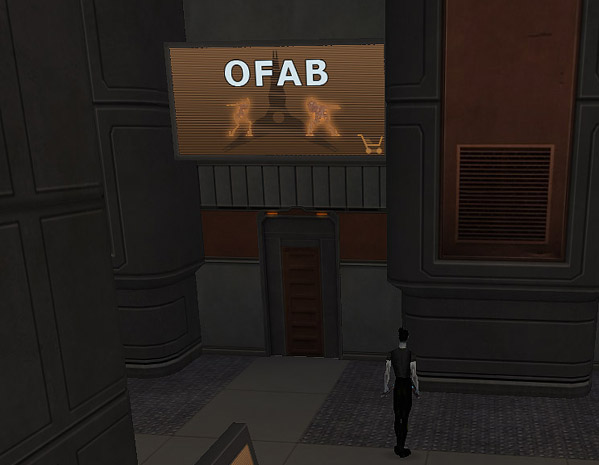 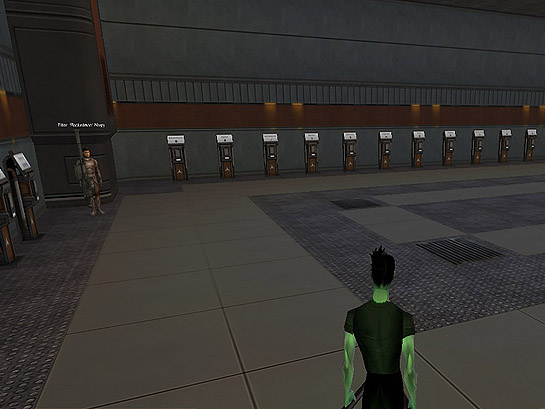 Once you get your Ofab items and youre ready to do battle, you need to locate your level range terminal and Right Click on it to Sign Up. Then you need to pick a color, RED or BLUE. This places you in a queue. 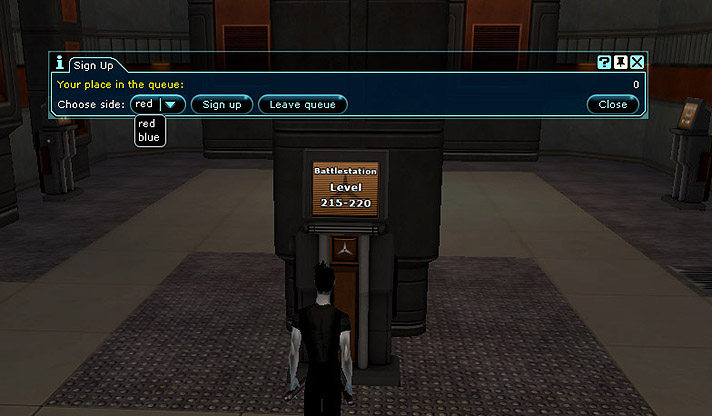 Each colored side has the same amount of spots available to them. After you have Signed Up (as mentioned above), when a spot becomes available to you, a window will pop up letting you know that there is room in the Battle Station, and ask if you would like to enter. Once you get invited, click on the accept button and you will get warped inside.


⇑
Decontamination Room
When you are warped into the Battle Station you will start in the Decontamination Room (also referred to as the Buff Room). This room will immediately clear your NCU, so dont bother buffing before you enter the Battle Station, except for pets you can control without outside buff (and for the pets themselves that will keep their buffs inside). While in the buff room you will get 50000 nano every few seconds so it is an ideal place to make sure you are fully prepared for battle with all necessary nano programs running in your NCU.

Be quick buffing, you only have a very limited amount of time. When your time expires you will be warped straight in the main part of the Battle Station, or you may pick your point from the Battle Station map on the wall in front of you.

If you happen to die anywhere in the Battle Station, you will return to this room and start again. 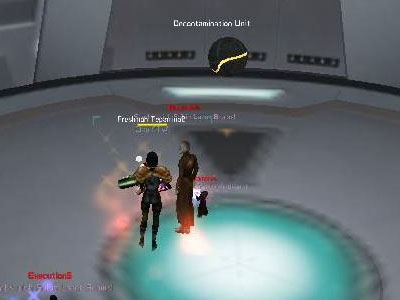 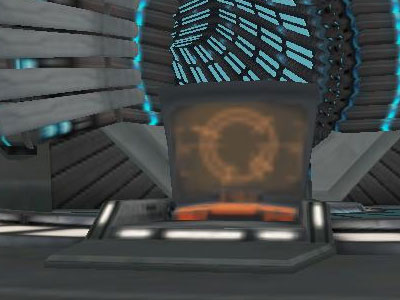 There are four control terminals in the Battle Station. Three of them are situated at the tips of the station and one is in the middle. To gain control of these terminals, right click on it a first time and wait about 15 seconds. During this time, you will be unable to move or make any actions. After this wait, right click terminal again to take its control. Once you have taken control of a terminal, you will get a message that you now own it and your team points will increase. The more terminals you control, the faster your points tick upwards : each terminal give roughly 1 point every 10 seconds ; but controlling all terminals lowers all these ticks at 1 second only !

Below is the map of the Battle Station. 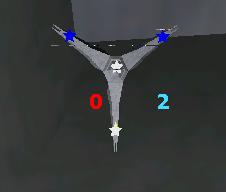 The control terminals are shown by stars. White stars are un-controlled, the controlled stars are represented by their corresponding colors of red and blue. As you can see above, BLUE TEAM already has 2 control points taken, and has accumulated 2 points in this battle.

The first one to achieve 500 points is declared the winner. The winning side will get the highest reward which is a set amount of VP depending on your level. The losing side will get VPs according to the amount of points that they accumulated.

⇑
Points
When inside the Battle Station, you will start at one of the station's tips, or you may pick your point using the buff room map. You have to maneuver your way through the Battle Station to the different capture points to start gaining points for your color side.


⇑
Warps
There are various warps inside the Battle Station. Basically, from each tip you can warp to any of the other tips, or to the center. There will be a marking on the side of the warp which will tell you where that particular warps leads. These are marked by the letters : A, B and C. A is the NW tip, B is the South tip, and C is the NE tip. 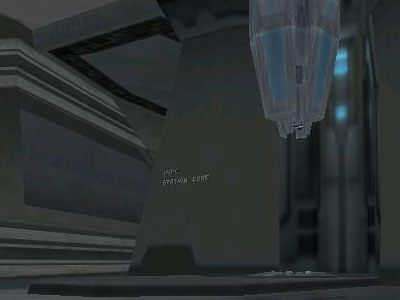 ⇑
VP Reward
As mentioned already, every time you participate in a Battle Station you will receive Victory Points. However, there is also the possibility to gain some extra victory points while you are inside the battle station fighting. It is quite simple. When you have killed someone, depending on the amount of damage you have done, a pole will appear as shown in the image below. 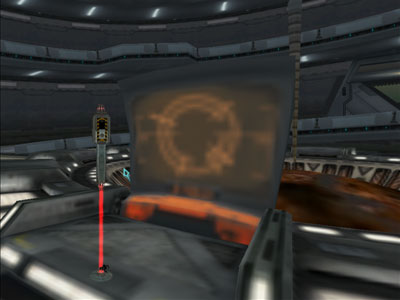 If you double click this you will receive some extra victory points based on your level.


⇑
Exit
If at anytime you want to exit before the battle is over, there are several exit points in the middle of the station. Simply walk on top of one to be transported out of the Battle Station without warning nor confirmation. This activates the "Loyalty System" : you will not receive any Victory Points if you use these exits, and you should receive a hostile nano in your NCU - which means that you won't rejoin Battle Station until "Deserter" wears off after 15 minutes. 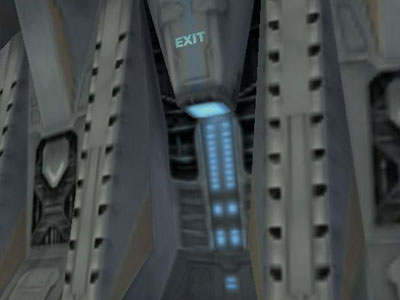 Every player will start with a loyalty score of 10

If for some reason your loyalty score should hit 0 it will not permit you to enter the Battle Station queue for a team
When this happens a Duty Mission will be available to help you restart to increase your loyalty level starting again from 1. If it falls to 0 again you will have to complete the Duty Mission again.

To earn back loyalty, you must report to
Unicorn Duty Sergeant
Borealis - 628.2x724.7
to receive your Duty Mission. The rumors that it may involve the picking up of trash in Borealis may not be unfounded. 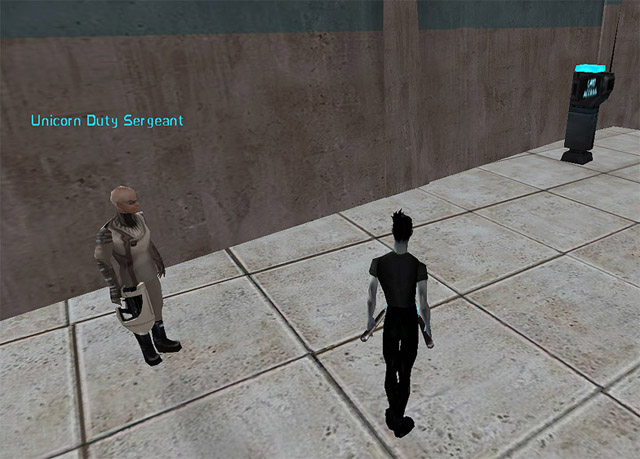