Weapon Initiatives and the AggDef Slider

Feedback: Feedback-Thread
Part of optimizing how well your character performs in combat is to maximize how often you attack with your weapon every minute while simultaneously maximizing your defenses against the attacks of mobs or other players. This guide attempts to summarize the concept of initiative and the Agg/Def slider.


⇑
I. Effect of Initiatives 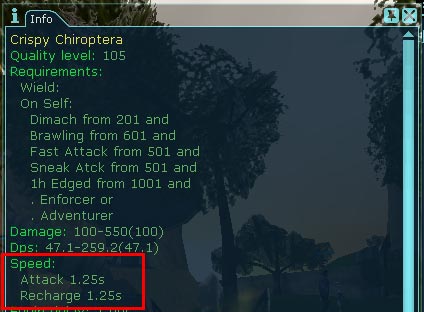 The skill that affects how quickly you attack is the initiative associated with your weapon. Each weapon has an attack speed and a recharge speed. This is the base speed for each weapon. All weapons can be made to attack faster by increasing your inits. For every 600 points of init, you reduce the attack speed by 1 second and the recharge speed by 2 seconds. Nearly all weapons have a capped attack and capped recharge speed of 1 second. You may hear other players refer to this as 1/1. Some weapons, such as Queen Blade have higher attack/recharge speed caps. However, the formula in general is:

Using the skill and Crispy Chiroptera from the images above we obtain the following computations: 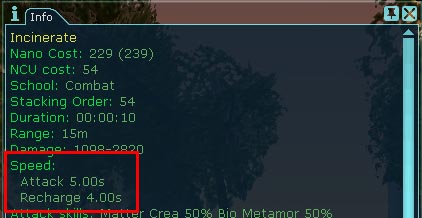 For nano programs, the init computation is different. The casting time of the nano program is reduced by 1 second for every 200 points of Nano Init you have. The cast time of nano programs can be reduced until they can be instantly cast. The recharge time is completely unaffected by your nano init skill.

Once again, using the skill above and Practice Incineration as an example, we obtain the following calculation:

A weapon's attack recharge time can be further modified by the AggDef Slider. There are no markings on the slider, and many people refer to the left side as 0% and the right side as 100% agg. I don't think that's an accurate representation of the effects of the slider.

When the AggDef slider is at 75% Agg position, there is no modification to your weapon's attack/recharge speed. Sometimes you will hear other players refer to the Agg/Def's "neutral" position. This is the spot they are referring to. Sometimes you will hear them refer to it as the 87.5% position. The neutral position is 87.5% if you go from 0% on the left to 100% on the right.

⇑
III. Why care about the Agg/Def Slider?

So why should you even worry about the Agg/Def Slider? Why not just set your slider to 100% Agg and dump as much IP as possible into the appropriate init skill?

Because setting the slider toward the left increases your survivability in combat, it is to your advantage to set the slider as far as possible to the left without sacrificing damage dealt due to the increase of your weapon's attack/recharge time.


⇑
IV. Putting it all together

So, in order to compute your weapon's true attack/recharge time you must combine the two computations above:

Additionally, knowing what your weapon's attack/recharge speed cap is (in general it is 1/1 seconds), the optimum setting for your AggDef slider is the position as far to the left (towards Def) as possible while keeping your weapon's attack/recharge speed is capped at 1/1. Thus there is also a maximum amount of initiative needed to cap your weapon at 1/1 seconds with the AggDef slider at 100% Def.

Notice in the image of the Agg/Def Slider bar above, the slider is set at 50% Def. Given that slider position note the computation of our weapon speed below:

The example above shows that the Crispy Chiroptera is not hitting at full speed. The Agg/Def bar should probably be backed off to -25% (25% Def) to achieve the maximum (1/1) speed.

There are several different AggDef/Init calculators available on the web as well as in in-game chat bots. You must be careful to figure out whether the calculator refers to the left end of the slider as 0% Agg (generally the case) or 100% Def.


Last updated on 08.25.2013 by Llie
Written by Llie.
Do you have questions about this article or found an error? 5 comment(s) - Click here to view them!