Feedback: Please Login first
⇑
Getting Started
You can buy all buildings required to fill your shiny new Alien Invasion City! These can can be purchased bully constructed by the Leader of your Organization from the Tower Shops located in Old Athens, Rome, and ICC.

You may still be able to build the buildings if you want to save some money (This part is outdated and we are working on its update currently).

To do so you have to build them using tradeskills. The store where a lot of these parts can be found is Uncle Bazzit's Shop in Meetmedere (MMD). (Note that to prevent griefing MMD is no longer 25% gas zone.). The shop is inside the city. When you are outside his shop, you'll see the sign above the door.

⇑
The Shop
There is one man you will want to see for all your building needs. Unzle Bazzit. Now please don't ask me why he's the one selling all the stuff you need to build houses, but he is.

He is not a man of tidyness and to cover up for it he has next to no lighting in his place, but the vendors are big brownish cubes located in the corners. They look suspiciously like the Fixer Shop near Borealis, now we know who built that. And if you fear gankers hanging out again in this little town - they are out of luck. Bazzit's first job after returning home was to turn up the suppression gas to 75%.

There are several terminal shops around, selling floor plans, various town decoration, and the "Miscellany" terminal that holds many other nifty things.

The first thing you need to know is the difference between a :

This have nothing to do with the QL of a building, but the type.

There are only 3 Advanced Structures :

The next thing you need to know is what QL building you want to make (Range: QL1 - QL300). The QL of a building is decided by one item used in the process : The Generic Organic Immunity System. A QL300 will give you a QL300 building, and a QL1 will give you a QL1 building. Simple and easy. You can buy them in Bazzits shop in MMD, but he only sell max QL75, so if you want to make higher QL buildings, you need to get them elsewhere.

Now, the way to get higher QL Generic Organic Immunity System is to gather Solid Clump of Kyr'Ozch Bio-Material. Alien Drop. These can be refined by using a Kyr'Ozch Structural Analyzer. The only problem is that clumps can turn into several (15?) types of items, so cross your fingers and hope for Kyr'Ozch Viral Serum. This is what you need to make a high QL Generic Organic Immunity System. You also need a Manteze Scout Nasal Membrane. RK drop.

You will find Manteze Scout Nasal Membranes (supprisingly) on Manteze Scouts. These can be found on the eastern coast of 4 holes. These, compared to the other manteze in the area, will run away from you when you get close, so you'll have to chase them around.

If you find a QL300 Clump you can (if you are lucky) refine it into a QL300 Kyr'Ozch Viral Serum which can then be tradeskilled into a QL300 Generic Organic Immunity System.


Now, If your serum was QL300 you have a QL300 Generic Organic Immunity System and are ready to make a QL300 building.

Now you can make all of the regular bulidings. All you need is to buy a Floorplan from the shop in MMD. (Only Regular building types).


Building is ready to be planted.


To make an Advanced Structure you need to upgrade your Regular Building Structure.


Be aware that there are 3 types of HQs and Markets (Floorplans) :
- Small
- Medium
- Large

Be sure to pick the right one.
Using a QL300 Advanced Structure on a Small HQ Floorplan is NOT a good idea.

Also note that Floorplans are NONDROP.

⇑
Loot and Name of mob:
Stalker Carapace from a Stalker (Stalkers, not striker stalkers or mist stalkers etc)

Wailing Wastes, 2350 970 - leads to a tunnel into the mountain
Stret West Bank

Here's how you build it :


This will save you the money of buying HSR bioplate + volatile nanobots (which costs about 3.7mil).

⇑
The Buildings
We all have come to like our /org contracts from Notum Wars. Now we will also come to like /org city - for it shows what we get for the money. And it's going to be a lot of money. Anyways, house bonuses work like contracts - buffs scale with level. All the buff values I mention apply to a lvl 200 char and are for ql 300 buildings.


The HQ is the prerequisite to owning other buildings. The HQ also has a grid terminal. Apart from that, HQs also have different nice rooms. All size HQ has a Laboratory that buffs the following tradeskills: Mechanical Engineering, Electrical Engineering, Quantum FT, Pharmaceuticals, Nano Programming, Weapon Smithing, Chemistry, Psychology (+160 Large HQ/+100 Medium HQ/+50 Small HQ), locks Computer Literacy. The Large HQ also has a conference room, a large guild meeting hall and a bar. Also there is an appearance change thingie that costs 50 mil to use.


This building enables gridding to the city in the same way as you would grid to your control tower at your notum base (if you have Notum Wars expansion).

It takes 1 square to build. I'd advise you to not build the grid house right next to the controller as you might get aggroed by aliens the moment you're gridding in.

This building has no other functions.

It takes 2x2 squares to build. You know you want one.

A nice building to have. The fun part is - this building can be entered, and it is a 0% suppression gas area! Arena fighting, or just sparring - this is where you do it, without the fear of gankers around.

It takes 3x3 squares to build. Nice to have but not a must if you ask me.

Now, you can of course use it to park your Yalmaha - and those new ones are surely precious to show off. But the main advantage of this is - it also gives you a boost to the skills needed for it. If you are running out of space, this would be the first to go in my oppinion. Nice to have, but not necessary.

It takes 2x2 squares to build.

From the outside, arguably an ugly building, in tune with the Mining Operations and the Notum Silo. The architect of this building was designing bunkers before he turned to city-scaping. But once inside, you will be amazed. This building truely looks awesome!

A large building, taking 3x4 squares. If you are low on space you might consider not building one, then again, it's a must-have if you are a social or RP org.

This building adds no buffs. But you know you want it, cause this tower enables scanning of your surrounding, giving you warning messages when an alien attack will occur. It's only a 5-minute-warning, but more than nothing!

This is one of the most important items to have. It lowers the chance of an alien attack - and by turning the ECM off it more or less "spawns" an attack within a few minutes.

It takes 3x3 squares to build. A must-have!

Now, this is something we've waited for. The ability to have a shop and sell stuff to other players. Basic, Advanced and Superior shops are available, their difference being mainly the size of the shop and the number of vendors. The superior shop has 120 vendors. In most large cities (not player cities) there are terminals that allow players to do a global search of shops, you just need to set QL range, price range, and name of item. Beware that only neutrals and people of your own faction can search and buy items at your shop.

Regardless of inside size, they all take 2x2 squares.

As of the 18.5 patch series, and the introduction of the new Global Market Interface (GMI) player shops are no longer accessible and the markets are not able to be placed.

Pure social - the place to hang out and wait for those aliens to come.

It takes up 2x2 squares.

Purely social as well - but you will be able to party in the sky.

This one takes 1x2 squares.

This building has heavy-armed guards who will hold up the aliens until you can marshall your own troops to defend if need be. Guards are unable to defend a city alone for long, but they can be of great help some times. Be aware that if a guard outdamages you or your team, you will not get the alien experience and won't be able to loot the alien corpse. Most guilds these days choose not to have guards, to avoid any possible accident of a player attacking a guard by mistake.

It takes 1 square to build.

Apart from the grid, there's Wom-Pahs to several of our favorite bars: Reet's, Neuters, Rompah. After fending off the aliens, this is the place to chill out and talk about your heroic deeds. Or something.

This small building offers XP buff by warming up your bones near fire during over 1 minute.
To assemble it yourself, you'll have to loot its various pieces from bosses all around RK and SL :


This should require only 1 building square ; buff doesn't stack with most other XP buffs.

And if your city doesn't appeal to you yet with all those buildings in it, you can still place trees, statues, lamp posts and benches.

These take mini-squares to build and can be placed on the margins around the buildings.

⇑
Guests in the building
Yes, you can have friends over at your city! They don't need to be in your org, just team with your guests, enter the building first and then they can enter after you (as long as they have the Alien Invasion expansion installed). Good to have a friend use the laboratory, grid out after a raid, relax by the pool or PvP in private if you want. 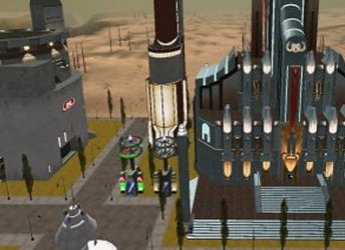