Early this morning, in response to the many arrest warrants issued by Omni-Pol and Omni-AF in the recent weeks the clans have released the following holo-post on the gridfeed: 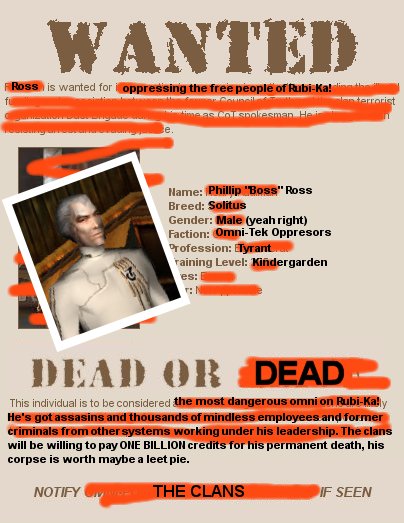 It is uncertain if the offer of one billion credits is serious, or if this is the clans way of disregarding the warrants on their leaders.

I asked a few local citizens of Athen City what they thought about the holo-post, here are their comments:

"About time someone put a price on that man, he's a mean old man." - Mrs. Kurbe Nasow

"Hey man, Radiman may not be my favorite guy right now...but nobody is taking him away, to hell with Ross!" - Mr. Mardo Randalf

"The corporation had it coming, they put out a ton of 'warrants' which are based on bronto crap and they expect our side to take it serious? come on! they would had a better chance to put a price on the heads of the dusters I say! yeah! why not go after them? they're the real terrorists!" - Mr. Gohan McDuff

Now we'll have to see and wait for Omni-Tek's answer to the clans reply to their action. Will they revoke the arrest warrants? or will they issue more in their attempt to weaken the leadership among the clans?