Late in the afternoon I received the following holo-pic at my grid mailbox from an anonymous sender. 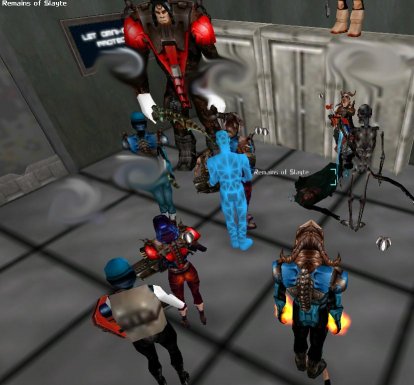 It shows the remains of a Mr. Vincent "Slayte" Valentine, an omni bounty hunter, known to be a professional Agent. A message was included with it.

"This man was working for Omni-Tek. But the fact of the matter is, the ones who killed him most likely killed him permanently. These people are criminals, Mister Rivera. I got a holo-pic from my contact, apparently though, it was altered to remove their names before I received it. I do believe these criminals to be linked to one group, the Dust Brigade. I believe the ones who killed him, were on the bounty hunter's bounty list. This is verified. I cannot reveal who I am Mister Rivera, for my own safety, but I think the public has the right to know."

We tried to track down the source of the grid mail, but it had been sent from a terminal in Borealis without any trace as to whom had sent it. All I can do is share what I have received with the public.

How the assailants, who bear the marking of the clans, and indeed the Sentinels themselves were able to operate within the walls of Omni-1 has seen a series of statements from various Omni-Tek security departments, as they seek to stop any rumors surrounding the safety of normal employees within their own cities.

Omni-InternOps were the most senior department to release an official statement, with their Director Dr. Kelvin Hasting issuing this short statement:

"Omni-Tek takes such incidents very seriously, and I would like to take this opportunity to assure our employees that such incidents, and I must stress the details are still unclear, will be pursued with the full force of the corporation, and should any, and we mean any link be shown to either the Sentinels, or any recognized Clan, then we will involve the ICC and most likely pursue our right to take action, police action if necessary."

How the victims insurance was disabled is also unknown, and that perhaps is a more worrying trend for the OT security forces.