Feedback: Feedback-Thread
NOTE: If you are level 130 or above you do NOT need to complete this quest. Merely talk to Ergo and he will grant you the Achromic ring as well as your Scuba Gear.

The Ergo manifested in Scheol needs assistance in making Local Gravity Monitors because of the mind boggling geography of Scheol. Luckily you do not need to chat to Ergo before collecting the items.

Here are the items you require:

Note: Navigating in Scheol can be a bit of a challenge. Possibly the most challenging Shadowlands zone to traverse. I would recommend exploring it a bit before taking on this quest, or if possible take a long a friend that might have more knowledge of the zone than yourself. I would also recommending having at least the Garden key of your faction and also the Sanctuary helps for easier access to Ergo once all items have been collected. If you do not have the garden key, at least get saved in Ocra/Roch Garden for handy /terminate activities, believe me it will often take a lot longer running back and forth than "rezzing" in the Garden.

The Widget can be found on the Undead Engineer. He is located inside the Unredeemed and Redeemed Temple. 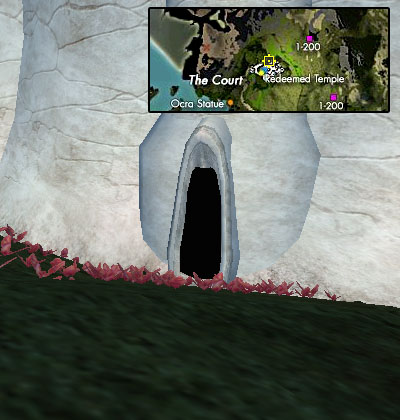 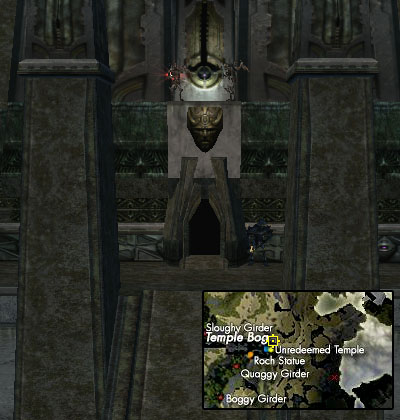 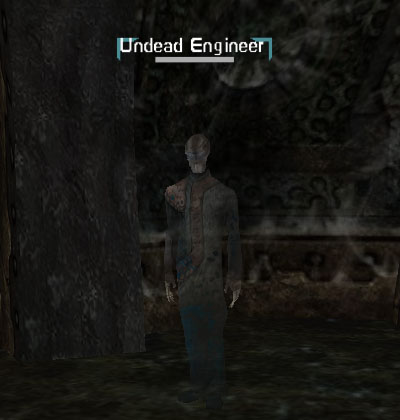 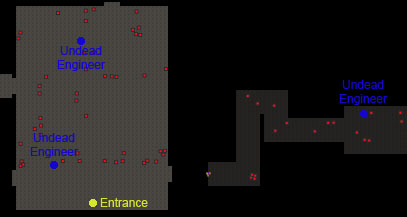 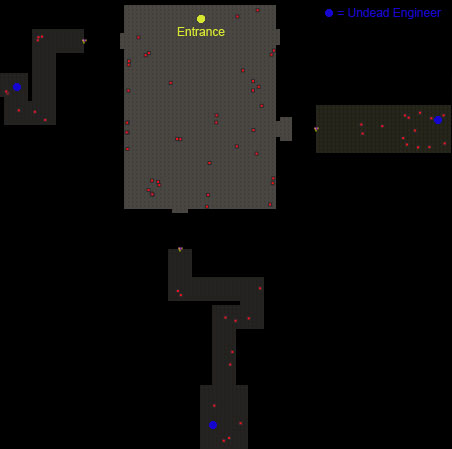 Be careful inside the spirit room. There are plenty of mean spirits around and they are prone to grouping up on you. Go straight to the right and follow the map above and you will get to the Undead Engineer without too much hassle. Note that he only drops one Widget to Gadget.

This item can be a bit of a hassle getting to. The mobs that drop it are located around a pyramid in Upper Scheol. The path up to it have tons of Chimeras in the way. But make your way to where the Yapping Chimera is marked on Spheremap, Head South-west and follow the path up 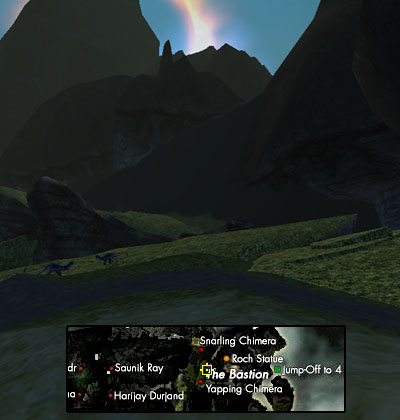 and you will eventually be faced with the pyramid. 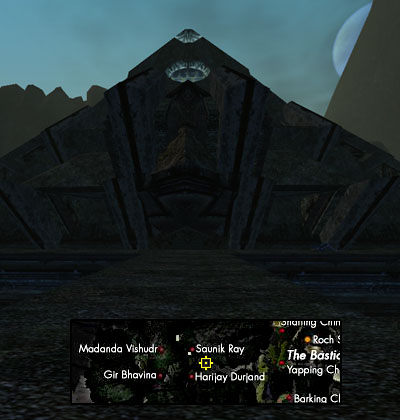 Around it you there are plenty of mobs, and as per usual the boss mobs have a higher chance of dropping the Multi-Gyro.

Note: Omni can use The Bastion Exit from the Garden.
As Clan exit the garden at the Mirador Statue and head NE to the back of the village. You'll see a tunnel leading up. This is Ocra's Secret Passage and takes you straight up to the pyramid.

This particular Multi-Gyro Component is also located around a pyramid as well. However this pyramid is located in Lower Scheol. Time to get your running shoes on. 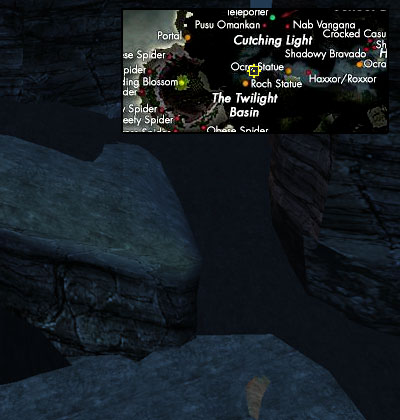 Head NW to the bottom of the patch, and then turn East following the path until you are faced with these blue, shiny pillars: 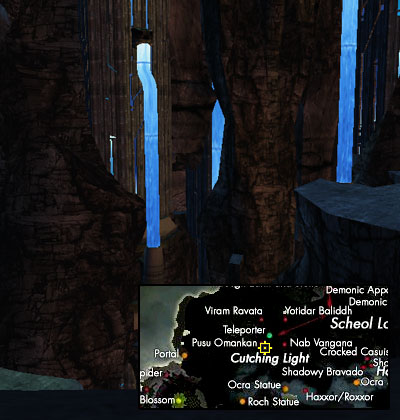 Between two pillars on the left, you will see this teleporting pad. Step onto it and you will get warped up to the pyramid. 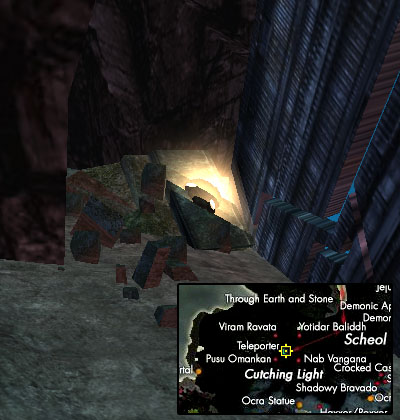 As with the previous pyramid, the bosses have a higher chance of dropping the Multi-Gyro Component.

This Sphere drops regularly off mobs at the bottom of Lower Scheol in the region called "Rock Bottom". To get there, exit from the Omni or Clan Garden to Halls of Scheol. A few meters South-East from the Omni exit you will see a bridge, go about half way across it, face West and jump off. From the Clan Garden, head slightly east and you will soon see the same bridge, jump off from it. 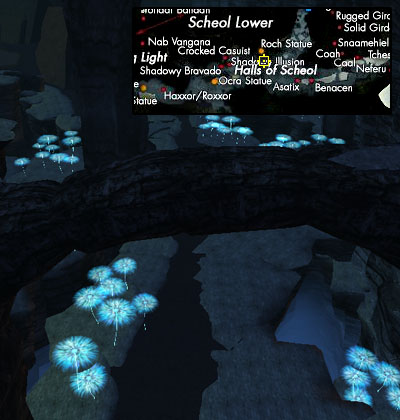 Straight west from the drop off point there are plenty of Shadows and also a Casuist, all of them can drop the Metal Sphere. As per usual, the bosses have a higher drop rate. 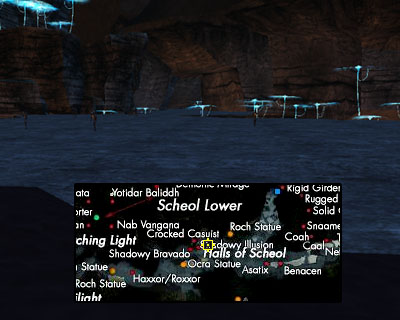 Before you start rushing to Ergo to give him all four items; Stop! You are not going to deliver the four items to Ergo, instead you are going to get it made into a Local Gravity Monitor for him. To get this done, you have to head to Leading Blossom, a Yutto that is located at their encampment at The Twilight Basin. So from Unredeemed/Redeemed Garden head to The Twilight Basin/Cutching Lights exit and head to the same junction you headed to when picking up Navi's Multi-Gyro Component. Head North-West down to the bottom of the path, but this time head West instead of East. Eventually the path will open up and you get to see the actual Twilight Basin. 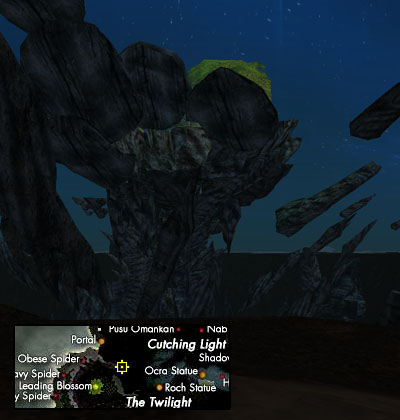 See that tree at the top? That's where we're headed. So turn North and run to the NE edge of the rim. Glance below and you can see a portal. 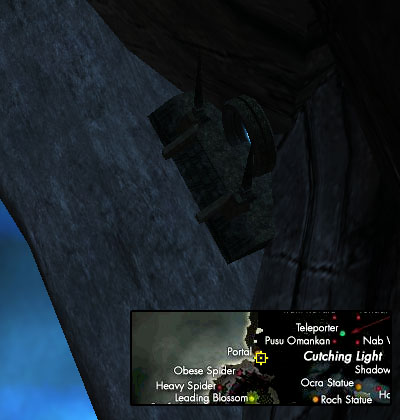 Be careful when leaping down so you don't end up landing on Rubi-Ka. Head through the portal and follow the path West down to the "island" and you will be face to face with Leading Blossom. Give him the four items and he will kindly make the: 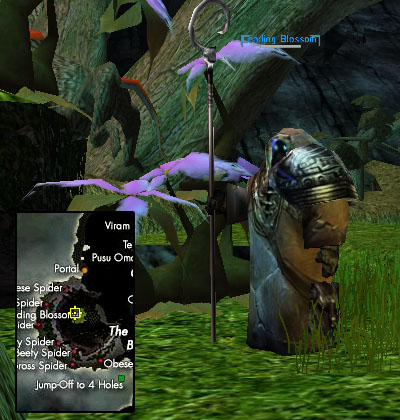 Note: You will need your Caliginous Ring, so don't forget it in your bank!

Finally, it is time to head back to Ergo and listen to his wonderful jabbering. This is where the Sanctuary exit comes in handy since both Clan and Omni exits drop you out much closer to Ergo. If not, it is time for a long trek from the Halls of Scheol exits. Jump down from the bridge as you did when getting the Antigravitational Metal Sphere. This time though, head East, keeping as far north along the path as possible so you do not attract the attention of too many hiathlins. Eventually you will come across Caal and his Hiathlin mates. 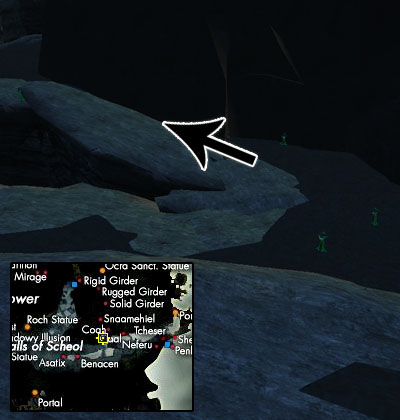 Head west up this path and then follow the landscape past the Hiathlins and Girders. Be aware that there are a lot of mobs around, and in particular when moving up the scaling path ahead 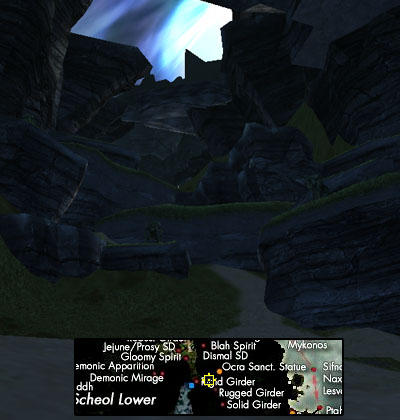 you can easily get the attraction of a lot of Girders. Keep heading north when you reach the top, following the path laid out until you get to the "bend". 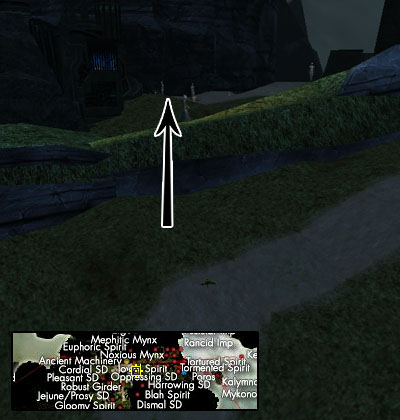 There will be a LOT of spirits around. So try to not attract to many at one time. Just north of this point is the entrance to Ergo's cave that can be easy to miss. 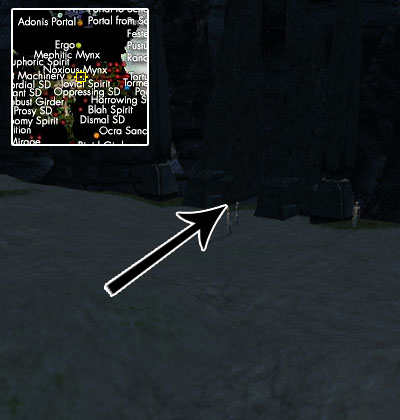 Head into the cave and you will finally be faced with Ergo. 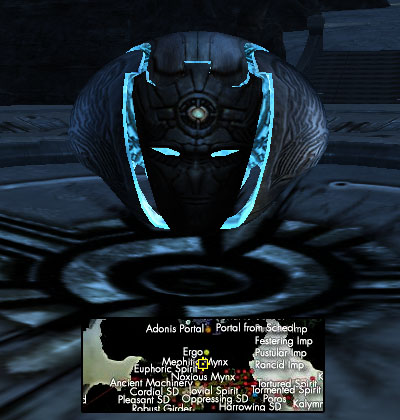 Chat with him and hand over the Local Gravity Monitor and you will get a Mark of the Lost Souls in return, that you can trade to Ergo when you feel ready to do the Trial.

Before heading into the Trial mission though, you will have to hit up a few more Spirits and Soul Dredges in search of:

As usual, the bosses have a higher chance of dropping them.

Once you have all six Soul Globes, head to the Entrance to the mission which is located just North of Ergo 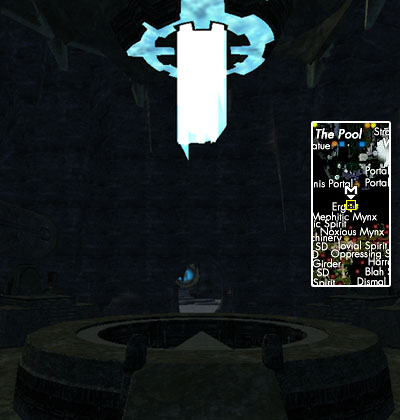 Inside the mission, be on the lookout for "Soul Hungry Demon". Do NOT attack it, but instead have a chat with it and hand over the Soul Globe to it. 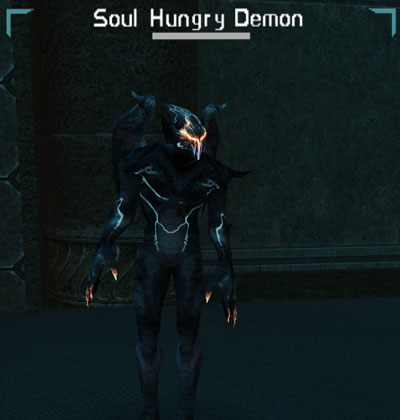 It will spawn the Arch Demon of Scheol, this is the mob you are after! 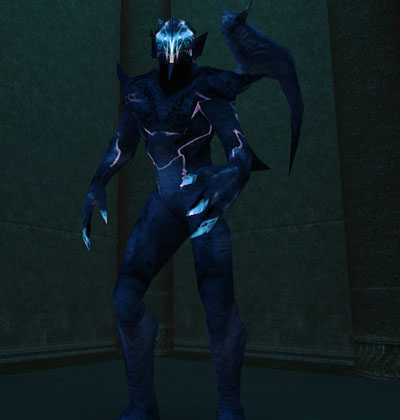 Once he's down, time to have a look at his body for a

He drops three of these in total, so there's 2 more left over for anyone else that requires access to Adonis.

Note:You will get a massive amount of XP from this quest. If you are doing this for a low level twink it is a good idea to turn off all XP gains. I have unconfirmed reports that deleting the "Return the Demonic Spike to ..." quest will still give you the Ring, but not give you any XP at all, use with caution.

Head back to Ergo and hand him your Caliginous Ring, Mark of the Lost Souls and the Demonic Spike. In return you will get:


Last updated on 06.23.2012 by Llie
Written by Quilluck
Proofreading and additional information: Ophiuchus
Do you have questions about this article or found an error? 2 comment(s) - Click here to view them!