Feedback: Feedback-Thread
Note: If you are above level 160 you are not required to do this quests to acquire access to Penumbra. Just chat to Ergo and choose to skip the trial and you will be awarded the Rimy Ring as well as Hyper-Radiation Protection Skin and Glasses.

Each zone in the Shadowlands has a quest that, if you do not meet the Level requirements, has to be completed before being allowed access into the next set of zones. All of these quests are given out by Ergo in the particular zone you wish to travel from.

Unlike most of the other progression quests, I would recommend chatting to Ergo as your first step so you can get the Instructions for Dr. Pons that you will need later. So time to find Ergo!

Luckily finding
Ergo in Adonis
Adonis Abyss - 1897x3811
is not quite as difficult as it might have been in Scheol. He is underwater though, so beware of Lone Sharks and other dangerous mobs. I'd highly recommend having the Adonis Sanctuary key, since it will allow you to "skip" a large part of the trip to get to Ergo and might save you a lot of frustration when you suddenly run into a batch of mobs.

Follow the map and you should have no huge issues finding him. 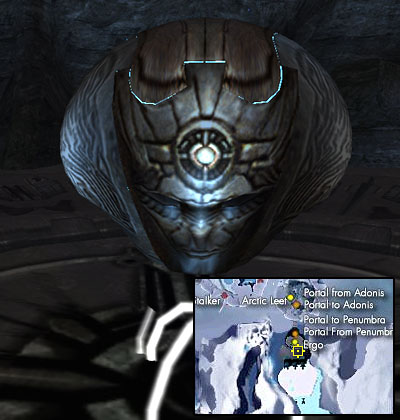 As with the other progression quests, Ergo is looking for a few items that can be found around the area. This time around he is looking for:

In addition to telling you what he is looking for, he also gives you:

Instructions for Dr. Pons
which you will need later on in the quest when acquiring the Calibrated Palladium Alloy Trace Base.

I personally prefer getting these items first since it seems to be the most difficult to acquire because of horrendous droprates. They drop from Balanoid Bileswarms. To get hold of a Balanoid Bileswarm you will have to find a Disgusting Parasite first. These critters hang out around the Portals from the Abyss. 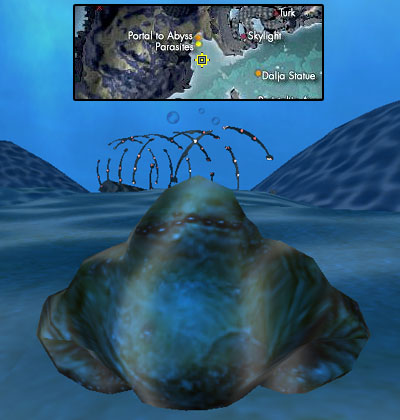 This part drops from Eremites found at two different spots in the Abyss. 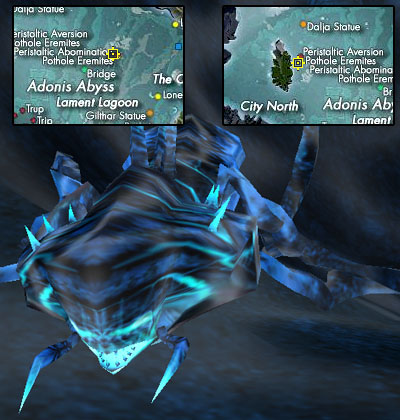 If you know where to go, this is probably the easiest part to get of the four. If you have completed the Gilthar or Dalja Garden Quest you will be familiar with the area it is located at. The item can be found in a dungeon whose entrance is found underneath the platform where the ARK is situated. Instead of running up onto that part of the structure, run to the western end of the building and you will eventually see this corridor. 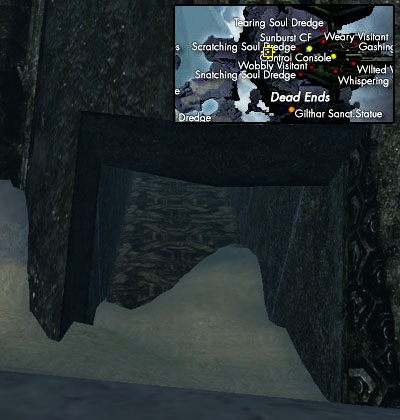 Follow it to the end, and you will see a door at your left hand side. This is the entrance to the dungeon. 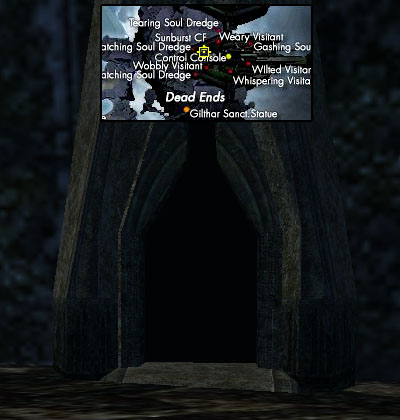 Inside you can find the Sunburst CF Electrolyte Base dropping from most mobs, as well as in the chests. Personally I have had more luck with the chests.

Note: Keep an eye out for

Curse the Watcher
Drops often from heckler and spider mobs and will come in handy later on in the quest.

Remember the Instructions for Dr. Pons that Ergo gave you? Time to find Dr. Pons and hand it over to him. He is located in an underneath dungeon called
Sprawling Hives
Adonis Abyss - 2461x1740
and it can be quite a challenge to get there in one piece. Not only is it surrounded by lots of spiders, there is often a Lone Shark patrolling that area. 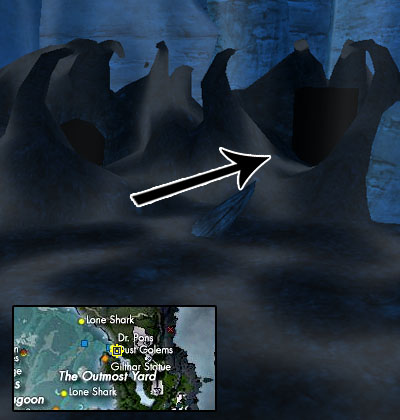 As you can see from the image, the entrance is number 2 from the left. A good idea would be to follow the ridge until you are almost at the dungeon, then jumping off and hoping you aren't eaten up alive by the critters beneath. Keep in mind that there can be a Lone Shark patrolling the area around the ridge as well, so keep alert as you might have to jump down earlier and make a mad dash for the entrance.

Once you are inside, it is time to make your way to the boss level where you will be faced with Lollygagger. 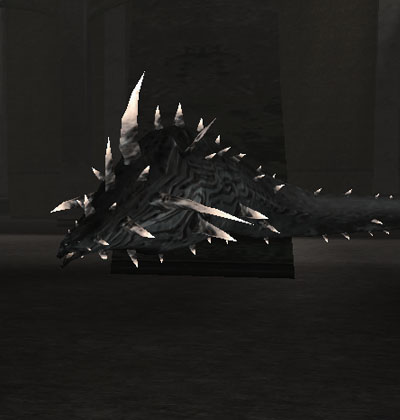 Once he has gone down, Dr Pons and Dr Fleischmann will spawn at the North-Western and North-Eastern corner respectively. First, talk to Dr Pons and hand him the Instructions for Dr. Pons. 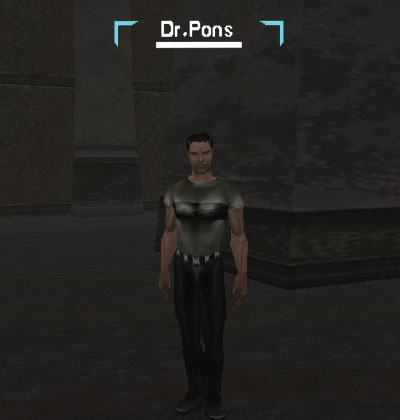 He will then hand you a

Head over to Dr Fleischmann 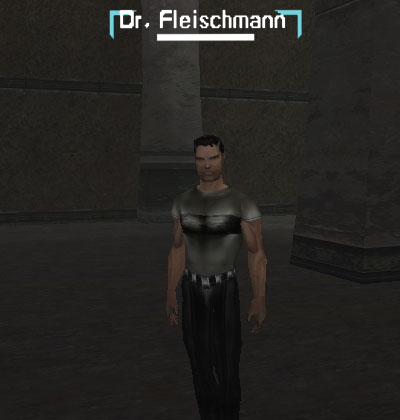 And hand the Palladium Alloy Calibration Device over to him. He will tell you that he needs you to collect three Assorted Metal Dust.

To find these, you will have to kill Dust Golems that will now have spawned around the dungeon. They basically look like slightly large versions of Hecklers and seem to have a 40-50% droprate on the Metal Dust. 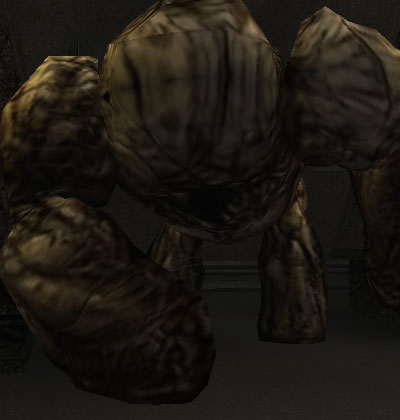 Once you have all 3, head back down to the boss room and have a chat with Dr. Fleischmann (Note: Depending on how long you took, you might have to respawn him.) and he will give you the Calibrated Palladium Alloy Trace Base.

Note: Keep an eye out for

Curse the Watcher
Drops often from heckler and spider mobs and will come in handy later on in the quest.

(Note: If your search for a Curse the Watcher failed in the two previous dungeons, you might get lucky with the mobs within this mission. If not, you might want to ask friends or search the GMS for anyone selling one, unless you have high level assistance or an extremely solid team the Watcher will really hurt without it.)

Ergo will need to see your your Achromic Ring, so don't forget it in your bank!

Remember to bring a Mission Key Duplicator if you wish to bring a few friends in to help!

(Note: It seems if anyone out of teaming range enters this mission and attacks the Watcher of Adonis at the same time, he will disappear.)

Head slightly north from Ergo and you will within seconds be faced with the entrance to the "Trial". 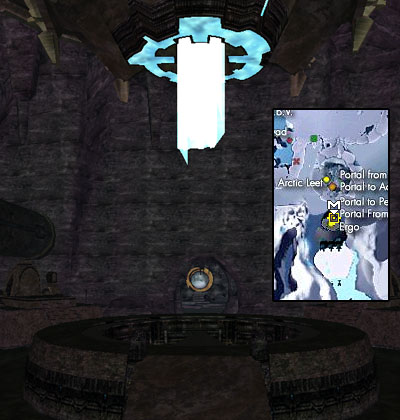 Once inside the mission, make your way to the watcher and prepare yourselves. 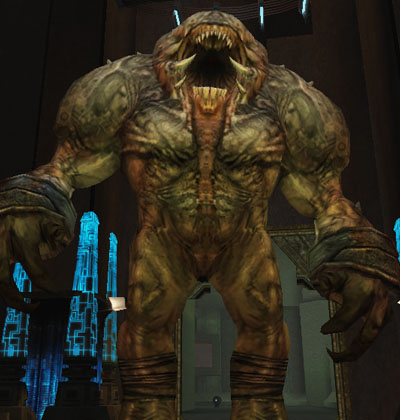 Bigun ain't he? Well this would be the time to pull him to a safe area, if needed. Use your Curse the Watcher on him, if you have it, and start bashing him. Without the Curse The Watcher this will be a challenge even for high level players.
He drops a total of 6 Chunk of smoking rock

Once you have all looted your Chunks, head on back to Ergo and he will be ecstatic to get hold of those Chunk of smoking rock. Don't forget to hand over the Mark of the Watcher and Achromic Ring as well!

Note: You will get a massive amount of XP from this quest. If you are doing this for a low level twink it is a good idea to turn off all XP gains. I have unconfirmed reports that deleting the "Deliver the chunks" quest will still give you the Ring, but not give you any XP at all, use with caution.

Depending on your profession you will be given one of these:


Last updated on 02.19.2022 by Saavick
Written by Quilluck
Proofreading and additional help by: Ophiuchus
Do you have questions about this article or found an error? 7 comment(s) - Click here to view them!