One of the features of the Shadowlands expansion is the Faction System.

As you progress through the Shadowlands, your actions in how you treat Factioned creatures will affect how those creatures of the Shadowlands see you, and after level 200, how you gain Shadowland Experience, (called Shadowknowledge (SK).

The main factions in the Shadowlands are: Redeemed, Unredeemed, Conservers, Operators, and Guardians. It's fairly easy to distinguish between members of each faction by their appearance:


⇑
Note: It doesn't matter which faction Neutral players align themselves to; however, all players should seek to gain Guardian faction.

The Guardians are followers of Ergo (basically the Yuttos), and their purpose is to hold back the creatures of Chaos that have invaded the brink areas of the Shadowlands, which consist primarily of Hecklers and Horrors. Therefore, in order to gain favor with the Guardian faction, you can kill Hecklers and Horrors. Also doing missions in the Shadowlands will gain you favor from the Guardians.

The higher you Guardian faction, the easier it is to progress to the next ShadowLands level.

There is a minimum amount of Guardian Faction needed in order to progress through the Shadowlands areas.

Factioned mobs in the Shadowlands that are aligned with a particular faction, (IE Redeemed or Unredeemed) will award a fixed amount of faction, determined by the creature involved.

As you kill opposing factioned mobs, your faction raises. The amount of faction you earn for killing a creature depends on how much faction you already have. So, the more you kill, the higher amounts you get.

As your faction reaches certain levels, you will not be awarded faction from certain mobs and lower mobs. At this point you will need to kill mobs in higher-level zones of the Shadowlands to continue to gain your faction.

Note: This is similar to when regular mobs are "grey" to you and you stop receiving XP for killing them. However, faction is NOT the same in that it is independent of the creature's level. So, if you have low faction, and even though killing a grey fractioned mob will not give you XP, you will still get faction. 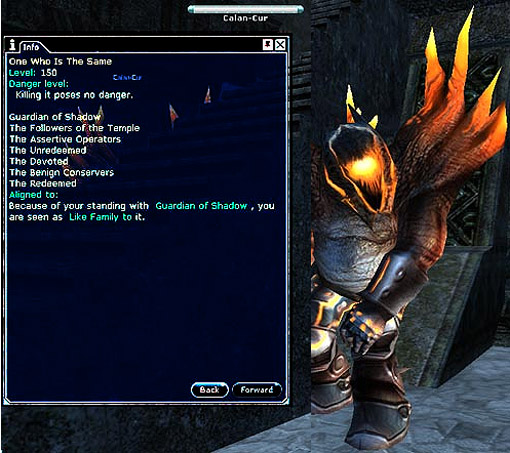 ⇑
Where to get Faction

Faction is only available in Shadowlands.

Killing creatures for faction will be easy at first. At least until you reach about 10,000 faction. After that, it will become more difficult to gain further faction.

You should work on killing bosses in:

-Spawning opposite faction bosses inside opposing temples located in Shadowlands

-Opposing Faction missions pulled from the Gardens located in Shadowlands

Note: Factioned mobs on either side are social, so be careful when attacking these creatures when they are within your own level range, (IE not gray). Read through the next section.

The most fundamental effect of your faction standing is that when your faction becomes "wanted" by an opposing faction, they will attack you on sight when within your level range. This will eventually make it impossible for you to freely travel through temples and towns controlled by the opposing faction the Shadowlands.

Note: Gray mobs (much lower level), do not *usually* attack you.

Additionally, faction mobs in Redeemed and Unredeemed temples will not attack you unless first attacked (with the exception of spirits in spirit rooms).

There is an additional complication for players who have reached level 200. The amount of Shadow Knowledge (SK) that you will receive for killing a creature will be affected by how much faction you have. Clan, Omni-Tek and Neutral players' SK gain will be affected by their Redeemed, Unredeemed, and Guardian faction score. The formula is based on the maximum faction score of 50,000. It is computed as follows:

Therefore, if you have only 10,000 faction then your SK gain will only be 20% of the maximum. You would thus receive only 20 SK for a creature whose maximum SK award value is 100.

Your faction score has a third implication on your game play.

An interesting aspect of Faction is the Operator and Conserver Faction. This faction is obtained by two mobs.

If you want to switch factions side, either from Omni-Tek to clan, or Clan to Omni-Tek, you must have enough favor in whatever faction you are changing to. Though at higher levels regular-sided faction usually causes an issue, Operator and Conserver Faction also matters! If you need this, just go kill some birds! 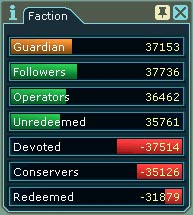 You can left-click on the window to choose between viewing your faction standings as a text or numeric standing.


Last updated on 01.07.2022 by Cariadast
Written by Llie
Do you have questions about this article or found an error? 4 comment(s) - Click here to view them!