Paolo Turin, found
near the Grid terminal
Omni-1 Trade - 409x542
in the Omni-1 Trade District, tells us about various rumours within Omni territory, regarding the clans building up special forces within training camps of theirs. Paolo knows Sergeant Jasmine Cordell is looking for volunteers to help fight this new threat to the corporation. So, as every good employee is supposed to, we'll head straight to her to see wether we can lend a hand too! 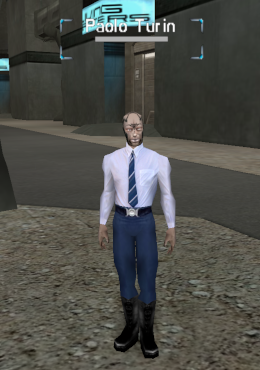 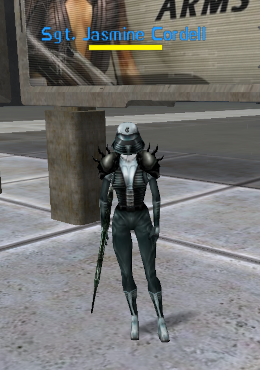 Besides giving us more detailed information about the five new camps, Sergeant Jasmine Cordell also hands out missions. Each of these missions requires us to first kill five of the adds, and then the main boss. After achieving that, on return to the Sergeant, she awards a Military Reward insignia. This item, besides being shiny white, has another nice use: upon right clicking it, it increases the owner's side tokens by 50, and the victory points by 500.

These bosses have a chance to drop any random Dreadloch weapons, high quality clumps to improve Ofab weapons and armor as well as the new combat token board.

The following items may drop from every boss, and in addition some bosses may drop some unique loot only they drop. Those are listed under each boss description below.

Hardly worth calling a camp, the Brigadier took residence in
a few ruins
Belial Forest - 3184x503
bordered to the north by a lake, to the south by a mountain range and small water flows with bridges across them to the east and west. It is patrolled by Clan Panthers, which are level 250 Martial Artists hitting for melee damage. 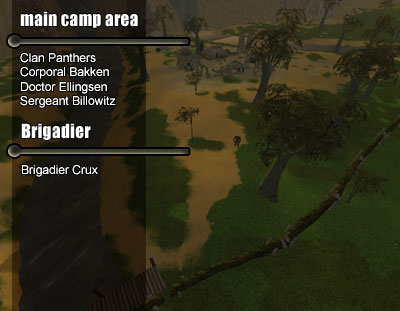 The first part of the mission to take on the Brigadier's camp is to kill five of these to prepare for your main assault. 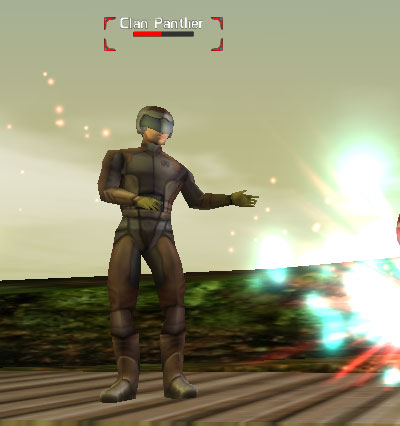 After getting the Clan Panthers out of the way, it is strongly suggested to not head straight for the Brigadier, but instead to take out his three named sidekicks first. The sidekicks are named Corporal Bakken, Doctor Ellingsen and Sergeant Billowitz. The Corporal is a Nanotechnician, who somehow manages to score regular hits even though he has a Cyberdeck equipped. His main attack though is Kel's Neutronium Plaything, an AoE nuke that can do up to 3000 points of damage. The Doctor's main attribute seems to be his restorative capability, including a resistance to the One Foot In The Grave Soldier nano line. The Sergeant does not seem to have any particular special tricks up his sleeve. Once these three are disposed of, they should not make a comeback for quite a while, typically far longer than a fight with the Brigadier will last. If they are not taken out beforehand, Crux will call them to his aid once he suffers some damage. 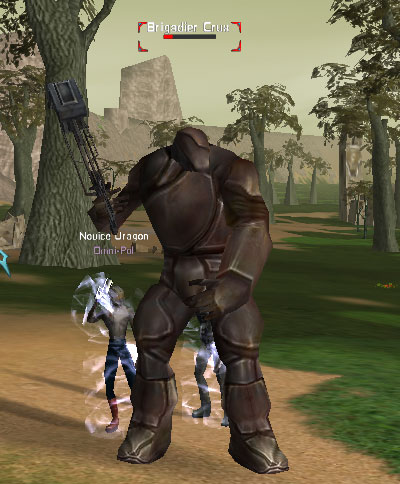 Brigadier Crux himself is an Enforcer, wielding a quite big hammer. He does not move from his spawnpoint and tends to warp people who angered him sufficiently up into the sky above him. Apart from this extremely annoying speciality, his melee hits seem to proc a 30m AoE stun called Stunning Blow, which can result in quite long chainstunning of a designated tank and his unfortunate team members in the vicinity. Ranged damage dealers and healers should definitely keep their distance, if possible. The stun itself is breakable with Free Movement. So keeping a stack of these on the hotbar can allow for a quick escape from a situation that might mean death otherwise. 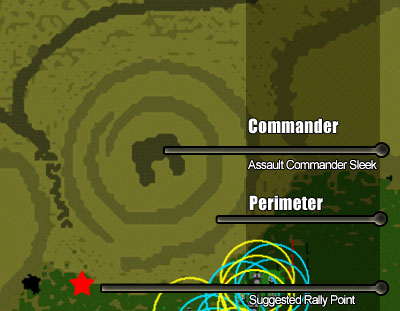 Assault Commander Sleek is within the walls of the
War Academy
Athen Shire - 1720x1920
in Athen Shire. The layout of the War Academy is pretty straight forward. There are two Outpost Sentries outside the main gate, and a few more inside. 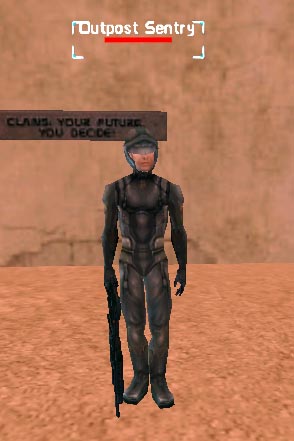 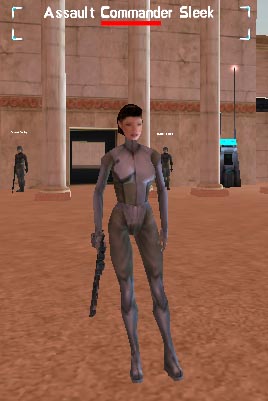 Assault Commander Sleek will be standing inside the main gate and in front of the War Academy. Sleek will not leave her post and so cannot be pulled outside the walls of the War Academy. It is best to carefully kill all the adds around her. She spawns adds spinning orbs named Executive Defenders as well as 2 huge level 250 mechs. It would be best it two team members prepared to mech up as soon as they spawn to deal with them.

Chief Gunner Kyle Swan is located in the small outpost of
Drumdar
The Longest Road - 3650x574
, south of the clan town of Bliss. There are a couple of Underground Soldiers outside the outpost walls, and a lot more inside. 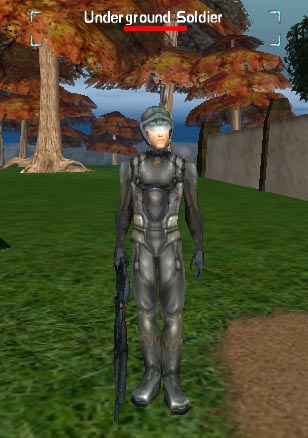 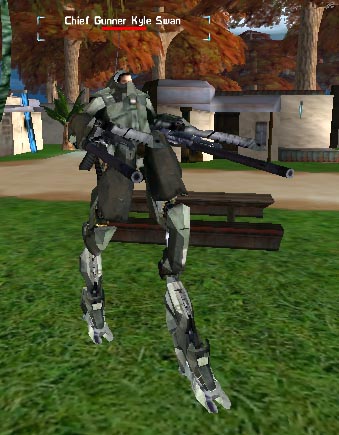 Chief Gunner Kyle Swan continuously patrols the grounds inside the outpost compound. Occasionally his patrol takes him near the front gate. All team members should be meched up to deal with Swan after killing the Undergound Soldiers guarding the gate. It is possible to carefully pull him out of the compound. He will knock players out of their mechs.

Once outside, spread the team out and try to spread out the agg as well. If you can manage to force Swan to continuously switch targets, he will not have time to kick people out of their mechs.

Special Agent Deko is located at a
research camp
Broken Shores - 2240x4765
in northeastern Broken Shores. There you will find a Mysterious Alien Tower. 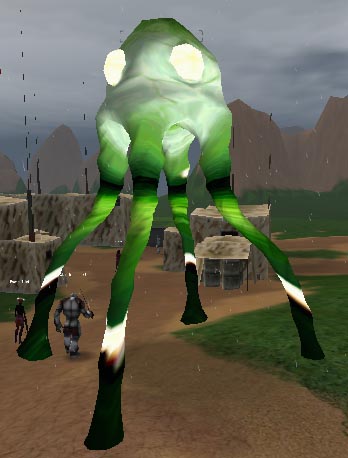 The tents are patrolled by Clan Specialist and there are also some Clan Scientists scattered about. You will be given a special tool to destroy the tower. Once the tower is destroyed, Special Agent Deko will appear. 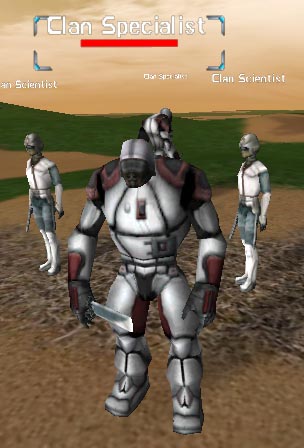 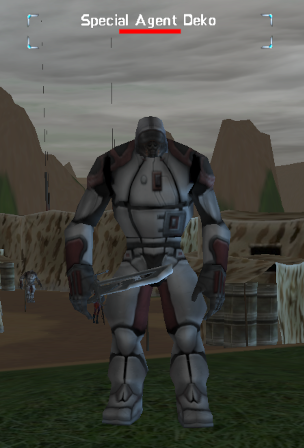 Special Agent Deko has relatiely low HP, but can wipe your NCU and has very fast attack cycles.

If you are doing the mission, your first task is to kill five Subterfuge Specialists. These are all in concealment so don't just run immediately into the camp. Have someone either with high perception go in and see if they can see them and pull them out, or just have a cautious tank. Carillion Thunder is located in
Safe Haventown
Upper Stret East Bank - 1798.6x2207.0
. 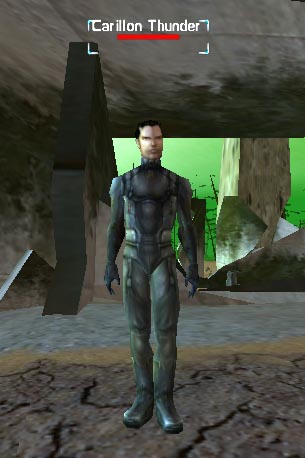 This boss likes to run a nano debuff on his target and also attempts to blow them up. Make sure your healer is stood well out of range of Carillion to ensure that healing is at its best.

Last updated on 08.26.2022 by Saavick
Written by Ukblizzard and Uragon.
Additional firepower provided by Omni-Pol.
Additonal information provided by KelticDanor.
Do you have questions about this article or found an error? 5 comment(s) - Click here to view them!