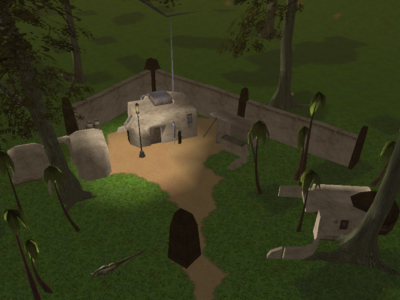 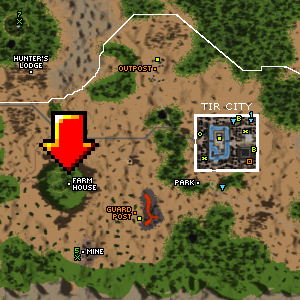 This ruined
farm house
Tir County - 1477x845
located on a fertile patch of land in a crater in Tir County may not look all that impressive, but it has an interesting history. A small info disk near it, part of Killian Sweeney's Rubi-Ka tour, explains it:

Welcome to the Tir Crater farm, where it is believed infamous clansman Simon Silverstone lived after arriving on Rubi-Ka.

It has been documented that Mr. Silverstone arrived on Rubi-Ka in 29447* as a stowaway on a smuggler ship. Even as a young man, he was a political activist, and while he got married and raised a family on his farm, he was also strongly involved in the anti-corporate movement on the planet.

After a raid tragically left his wife and three children dead, Mr. Silverstone turned to radical opposition to Omni-Tek and subsequently formed the clan Sentinels.

It has never been confirmed nor denied by neither Mr. Silverstone, the Sentinels, or Omni-Pol that this was indeed the farm where he lived and where the raid took place. It is widely believed the reason for this silence is to avoid vandalism.

Despite its desirable location, the farm lies in ruins and no one works the soil. It joins the thousands of ruins on the planet; homes and workplaces brought to rubble from the many years of conflict.

* Note: although these info disks generally have reliable info, this one has a corrupt date and in game it says 29477. Simon Silverstone's info on the Official Anarchy Online website states 29447 though, which is probably correct since the Sentinels definitely existed in the year 29470 and Simon Silverstone was in command back then.


Last updated on 02.07.2022 by Saavick
Written by Saavick.
Do you have questions about this article or found an error? No comments yet - Please login first to post a comment.