The Reck was a previously unopened playfield that was modified to provide an area for players to level through title levels 4 and 5. Although the camps, encounters and daily missions that can be found in The Reck are intended for characters between level 90 and 170, this area is accessible to players at all levels via whompahs in Tir or Omni-1 Trade. 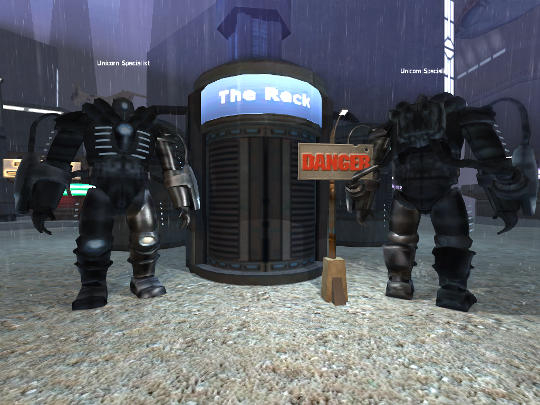 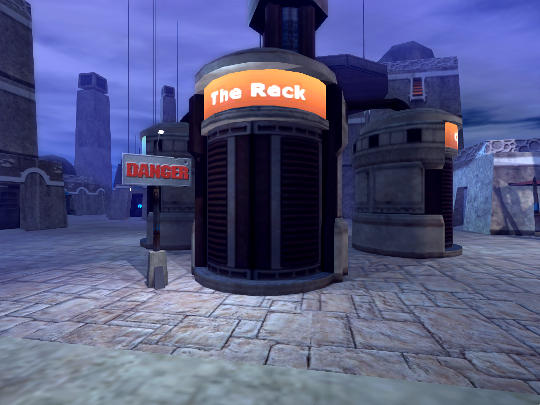 The region doesn't seem to be organized in any logical way; that is to say, the area is not organized by level range where mob levels start out lower closer to the entry location and increase as one explores toward a boss. There are some consequences of this arrangement of mobs. Firstly, in order to get around the Reck safely and efficiently, your character should be equipped with some means of flight. For characters who are at the low end of the intended level range of this area, not even roads are safe from encountering mobs much higher level than the character. Secondly, there isn't an obvious destination or boss as one explores out from the entry point. Therefore, we will list the areas and encounters from North to South.

Sentium is an Omni-Tek outpost in The Reck. Players that enter the whompah in Omni-1 Trade will arrive at this outpost which is located in the northeastern corner of the peninsula. This outpost bears a strong resemblance to Rome and is guarded by lots of Omni-Tek soldiers. There is an
Omni teleporter
- 1839.4x3351
located at the Sentium outpost that will warp Neutral and Omni characters to the northern part of the Factory complex. 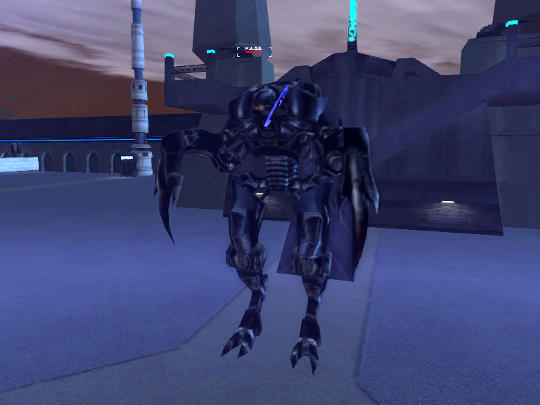 Within the Sentium outpost, you will find
M.A.G.S
- 1803x3303
, a black level 200 slayerdroid. True to form, M.A.G.S. has only melee attacks, and is susceptible to roots and snares with ranged attacks. M.A.G.S has a chance to drop M.A.G.S. Aggression Enhancer, which is a HUD1 item for Clan or Neutral characters that buffs AAO and nano skills. 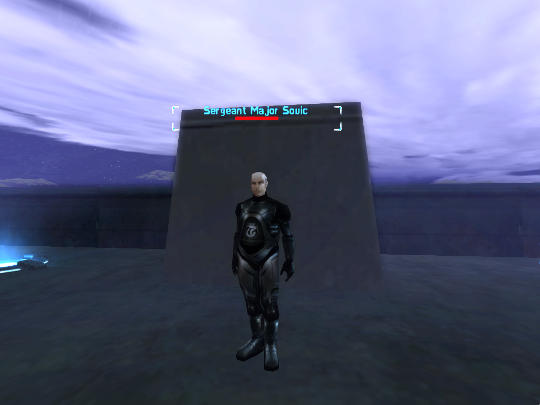 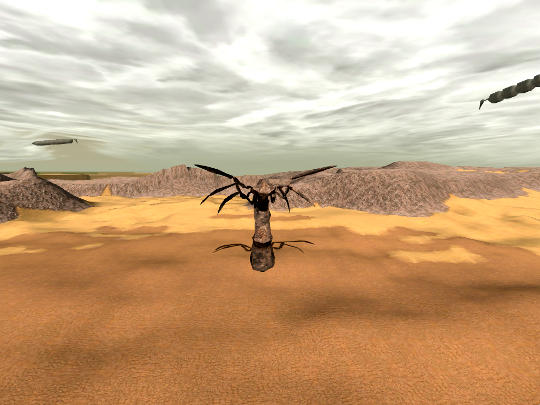 The statue at the north east side of The Reck that marks the location of the first of two
Lord of Sand
- 2267x2902
bosses. This eremite boss drops Gem of the Sands, which is like a stripped down version of Anything. Root-n-shoot characters and kiters need to be careful of this eremite boss, as it regularly casts stuns and roots, but other than a large amount of HP and hitting pretty hard, this is a fairly straightforward boss to take down. 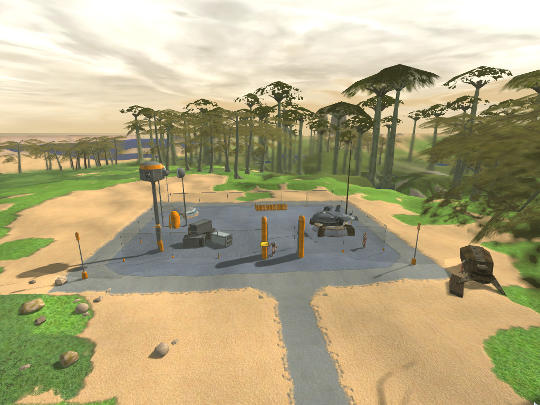 In the northeast part of The Reck, you will find the
Supply Station
- 1714x2713
. There is nothing noteworthy here aside from a few level 100-110 mutants. These mobs are a daily quest kill objective, and the above waypoint is provided for your convenience. 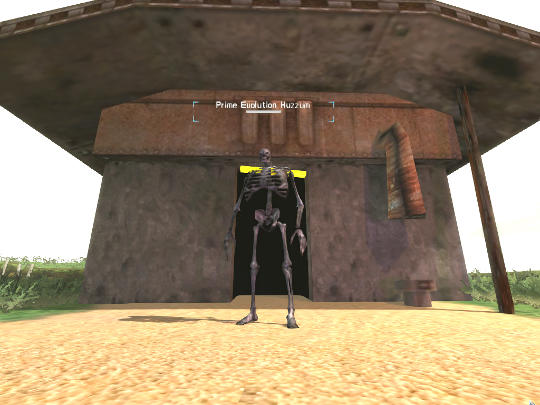 In the Mutant Village, you will find various mutants around level 110-120. At the center of the village, you will find
Prime Evolution Huzzum
- 1152x2344
. This level 120 boss is probably the easiest of the various bosses that you will find within The Reck, and does not have any real surprises. Hazzum drops Huzzum's Iron Fist and The Wizdom of Huzzum. Huzzum's Iron Fist is an alternative to the Torturing Tool, though it's unclear that any title level 4 players would gain much from this weapon at this point. However, The Wizdom of Huzzum is the long awaited big brother to Tree of Enlightenment.

⇑
Factory (North of The Dam)

At the center of The Reck is a large facility that is currently overrun by entvined Omni-Tek solders and Omni-Tek and the Clans are fighting over control of the facility. Omni-Tek have taken the northern half of the facility and have deployed forces there. There is an
Omni teleporter
- 1438x1853
at the factory complex that will warp Neutral and Omni characters back to Sentium. 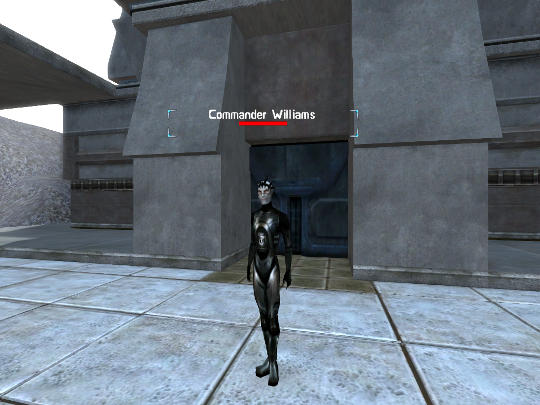 Commander Williams
- 1439x1905
is located in the Factory complex north of the Dam. He is and three of his guards are the objective of the PvP daily mission. Commander Williams is susceptible to roots and snares. He can be soloed but be careful of respawning guards. 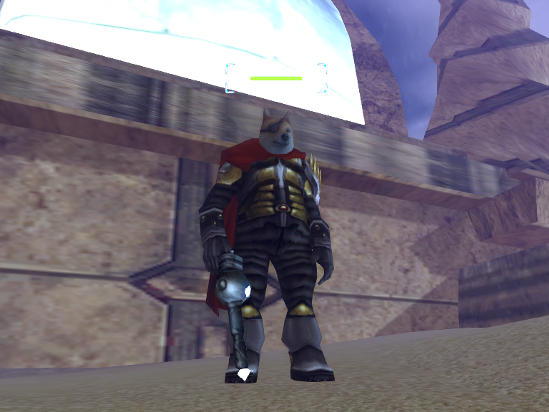 Located at the some ruins east of the Dam and Factory complex, you will find
Wardog
- 1785x1725
, a level 160 boss. He is not as scary as his name would imply. Near him you will find some level 120-135 SANDSTORM Soldiers, but only three of which are close enough to be a problem, and one is equipped with a rocket launcher and thus is not much of a threat to players on foot. Wardog drops The Dog of War, which is the follow-on to Customized IMI Desert Reet 1000, and Wardog's Heated Razor Gloves. The gloves provide some AC and shielding, but especially for fire-type damage. Wardog is a daily quest kill objective.

⇑
Factory (South of The Dam) 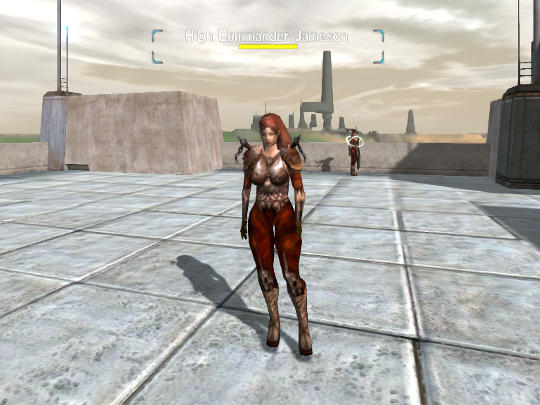 High Commander Jameson
- 1311x1473
and three of her guards are the objective of the Omni-side PvP daily mission. She's a tough fight but can be soloed. Like Williams, she is susceptible to roots and snares. She cannot be pulled far from her spawn point, so be careful of respawning guards.

The
Cyborg Executioner
- 1980x1411
is a 130 boss located at a Cyborg Prison Camp, which is on a small island near the eastern coast of The Reck near the middle of the penninsula. There are level 115-125 cyborgs scattered around the camp. The Cyborg Executioner Cyborg C.O. Wrist Computer which is a wrist item that buffs evades and provides a little AC. It can drop from any of the cyborgs, but, but the drop rate is best from the Cyborg Executioner.


⇑
Ruins (South of The Dam) 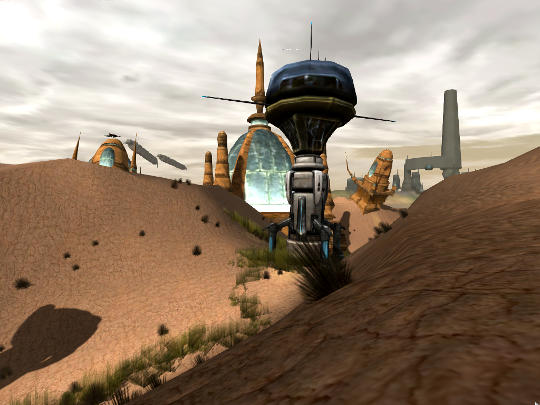 SANDSTORM Control Tower
- 1117x1126
is level 150 that is one of the daily mission objectives, and is situated among a tower field controlled by SANDSTORM. Nearby you will find level 110-125 SANDSTORM Soldiers. The Control Tower drops Damaged Notum Tower Shield, which is a HUD1 item. The buffs provided are limited but the Computer Literacy requirement makes it difficult to use for TL 5 characters with less than 900 in Computer Literacy skill that needs to equip a Yalmaha or Ganimedes Personal Jetpack for flight. 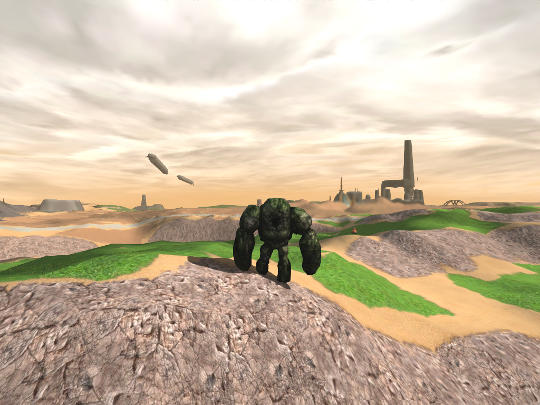 Just a bit southwest from the Factory, you will find Boulder Cliffs. Here you will find level 120-130 Primal Chirops and level 150-190 Bog Golem. The Bog Golems are essentially Hecklers on Rubi-ka. Similar to Hecklers in the Shadowlands, Bog Golems have a large aggro radius, hit very hard, and rarely miss. One would presume the XP awarded for killing a Bog Golem would be similar to that of Hecklers. 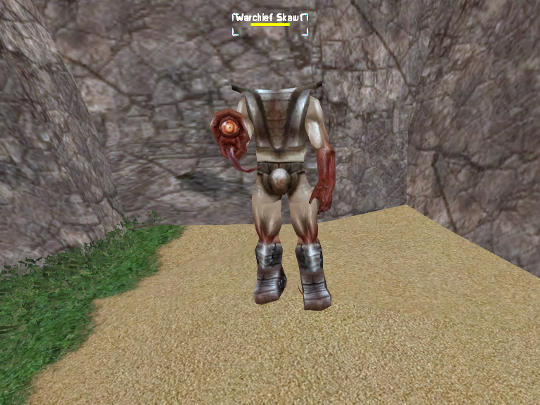 In the Mutant Hideout, you will find a huge eyemutant named,
Warchief Skawt
- 1861x968
. There are level 140-155 mutants scattered about the hideout. This level 170 boss is a daily mission kill objective and drops Skawt's Plasma Emitter and Skawt's Compact Plasma Emitter. These weapons were created for players who want to build a character around a ranged energy weapon. The mutants hit hard and drop multiple monster parts each, which can be a good source of income if you convert it into Blood Plasma. 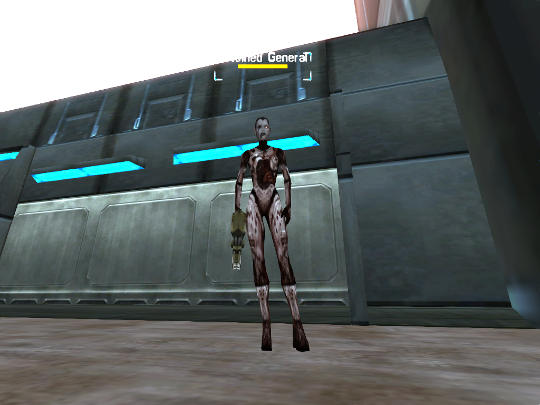 Port New Thera has also been infected by Medusea and the soldiers within have all been entvined. Within the complex you will find the
Entvined General
- 1520x794
. The general is level 210 and packs a wallop. The entvined solderies that surround the complex vary in levels from 130 to 170. The general has a 100% drop rate of at least one of Stripped Merit Board or Experimental Optic Enhancer. The Stripped Merit Board gives Neutral players a token board and the Experimental Optic Enhancer an improved version of HUD Upgrade: Enhanced Target Acquisition.

At the southern end of the peninsula, a group of Sentinels have established an encampment. Players entering the whompah from Tir will arrive at this location. This region is swampy region is covered in tall trees and permanently shrouded in a thick fog. There are plenty of Sentinel snipers hiding in the mist and guarding this outpost. For faster travel, there is a small
Clan teleporter
- 643x275
near Field Commander Tettle that will warp Clan and Neutral characters to the southern part of the factory complex. 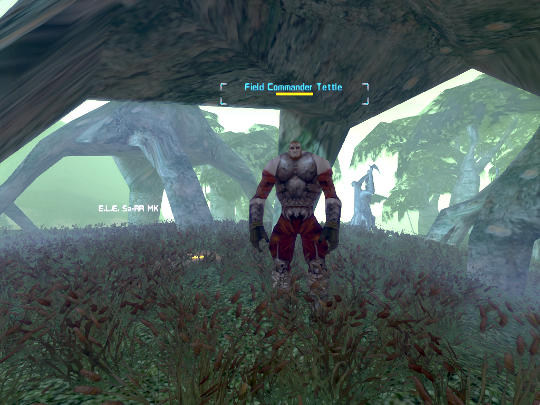 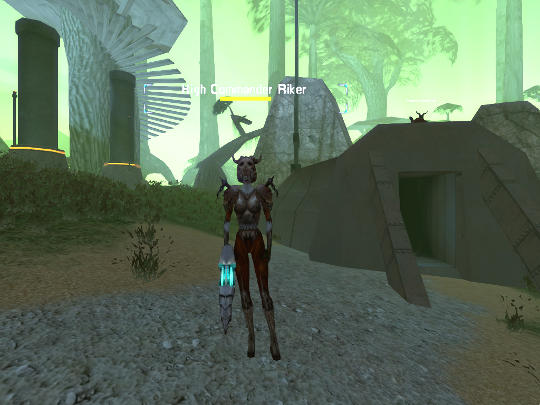 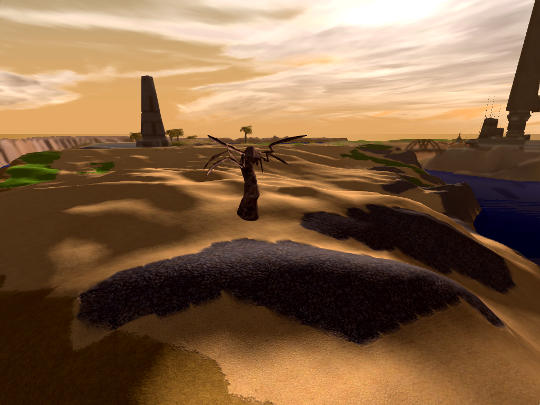 On the southern end of the Reck peninsula, you will find another eremite statue. Here is another
Lord of Sand
- 1533x237
, which is another level 160 eremite boss, which is identical to the one at the northern statue. There are level 130-150 Wasteland Scavengers and Sand Worms wandering around nearby. It also drops Gem of the Sands, and roots and stuns enemies.

At the southern tip of the Reck, there is an
Abandoned Mining Outpost
- 1158x241
which is overrun by level 95-120 Entvined Soldiers. The will occasionally drop Experimental Optic Enhancer. The drop rate is poor, but these are much easier to kill than the Entvined General.


⇑
Island of the Dead

The Island of the Dead is located in the southeast of the Reck. There are level 160-210 mobs wandering around the island such as Dragonclaw Knights and Lords of Pain. These mobs are fairly high level, but don't have any surprises. Just north of the island, at
the Watchtower
- 1800x486
, you can find an NPC called the Observer, who will offer you a daily mission to kill some of these mobs. 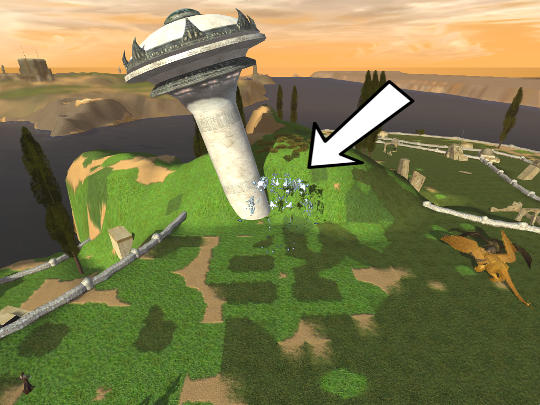 The big boss of The Reck is
Abandoned Hope
- 2009x182
, which is an enormous level 225 transparent beast on this island. Abandoned Hope can drop Vision of Hope, Vision of Destruction, and Death's Door. The two visors can be worn with "Social Armor", including Grid Armour. Once killed, the Abandoned Hope has a respawn time of an hour.

There are four Dyna-camps located across The Reck. They are listed in the table below. Note that these dyna's do not count to update the daily mission The Hunt.

Last updated on 10.28.2021 by bitnykk
Edited/screnshots by Llie
Information compiled from:
Official Funcom Announcement
Conspark on official forum post
Rain on AOFroobs forum post
Thanks to CrayIven and Cratattack for teleporter and waypoints
Do you have questions about this article or found an error? 11 comment(s) - Click here to view them!