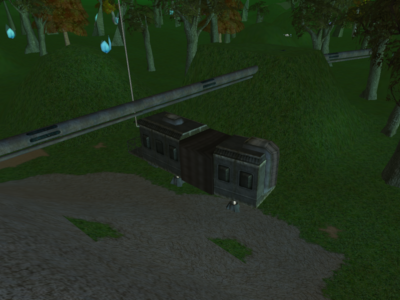 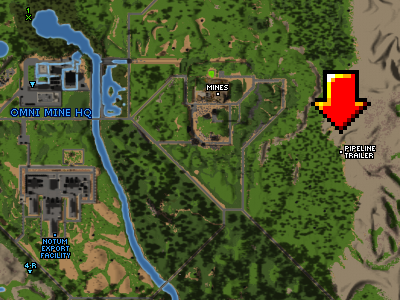 This
pipeline trailer
Clondyke - 2650x3670
by itself may not look like much, but it illustrates a larger phenomenon on Rubi-Ka. A small info disk near it, part of Killian Sweeney's Rubi-Ka tour, explains its background:

Welcome to the Clondyke Open Pipeline. This disk will provide you with some basic information about the most important industry on Rubi-Ka - Notum mining.

Since its discovery in 28715, notum has forever changed human kind. This astonishing element completely revolutionized galactic nanotechnology and pushed physical and meta-physical boundaries on Rubi-Ka. Found here only, it put Omni-Tek in the lead among the galaxy's hyper corporations, a position it has kept ever since.

Much controversy has surrounded notum, or rather its harvesting and worth. From lethal accidents to large scale wars, the fight to control the flow of notum seems to be a never ending one. Nevertheless, Omni-Tek still exports one and a half million tons of raw notum off the planet annually, and it all happens from the export facility in Clondyke.

Approximately one hundred thousand miles of pipes cross the terraformed planet, bringing harvested notum to the facility where it is bundled and transported off planet. This area in Clondyke is one of the few places on the planet where a pipe is actually exposed. For security reasons, this line is only an auxiliary pipe and usually does not transport notum.

The export of notum remains in control of Omni-Tek until at least January 1st 29550, when the current lease on Rubi-Ka runs out.

See the time line if you are interested in more details.


Last updated on 02.08.2022 by Saavick
Written by Saavick.
Do you have questions about this article or found an error? No comments yet - Please login first to post a comment.