Feedback: Please Login first
⇑
What is being "Over-Equipped"?

Long ago the concept of "over-equipped" was added to Anarchy Online because people were twinking armor and weapons on that had requirements significantly higher than their abilities. In order to prevent these players from being able benefit from all the effects of the items they equipped even after buffs ran out or when twinking implants were removed, OE was introduced to reduce the beneficial effects of items when a player's skill drops significantly below the item's requirement.

The following is quoted from Anarchy Online's official web site:

The definition of over-equipped (OE) is: using a weapon if any one of the user's skills/abilities isn't within 20% of what the weapon requires. The formula is: OE = 100 - (Your buffed skill or ability / requirement in same skill) x 100. If this formula yields 20 or higher, your weapon/armour/item/pet is over-equipped.

All weapons more than 20% over-equipped will have DamageBonus, DamageMin and DamageMax reduced with 25%. (DamageMax is the base maximum damage of your weapon. DamageMin is the base minimum damage of your weapon.) If you are more than 40%, 60% or 80% over-equipped, the damage output of the weapon will be reduced with (in order) 50%, 75% and 100%. The description of the weapons will be updated as the effect is reduced.

All pets commanded with more than 20% over-equipped summon/charm stats will not respond. They will finish fighting all their attackers, before going to the pet behind state. Pets will refuse to obey commands until the skills are back up.

When an equipped item goes OE, it is highlighted in red in your equipment window. Image below shows the Bracer of Recondite Flames equipped in the left wrist slot is OE. The requirement for this bracer is 470 Biological metamorphosis and this character has less than 375 in that skill. The bracer will only provide 187 Fire AC and 17 points of additional damage, though it will still change all damage to fire type. 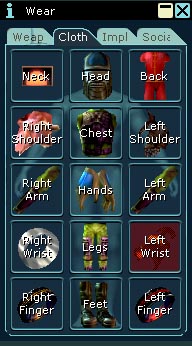 Being OE is determined on a skill by skill basis, and the item will be OE if any one of the skills falls below 80% of the requirement. Additionally, the penalty will be based on the skill with the largest deficit. This is particularly problematic for items with many requirements.

Take the Balanced Eye Wind Onehander for example. This QL 130 weapon requires 551 Shotgun, 414 Burst, and 277 Fling and Aimed Shot to equip. Let's say you are a low level trader with 441 in Shotgun, 330 in Burst, 221 in Fling, and 90 in Aimed Shot. In order to equip this weapon you got buffed with Skill Wrangler (Premium), a Riot Control, and a Take the Shot. When the buffs expire, this weapon will be OE both because of the Shotgun requirement as well as the Aimed Shot requirement, and the weapon damage will be penalized with a 50% reduction in damage based on the shortage of Aimed Shot skill, rather than 75% which is how much penalty you would have received if you were only OE due to Shotgun skills. Let's say you go into battle with this weapon and you drain ladder your skills until you have 509 skill in Shotgun. The weapon will still be OE with a damage reduction of 50% due to the weapon still being extremely OE based on the Aimed Shot requirement.


⇑
Skills affected by being OE

The rule of thumb is that if you are able to put IP into a skill, then it is not affected by being OE. Therefore, if an item buffs a base ability (such as Agility), a weapon skill, or a trade skill then the amount that the item buffs remains the same even if the item goes OE.

However, attributes that you can't invest IP into, such as ACs and weapon damage, will be reduced when the item goes OE.

There are, of course, exceptions to this rule. The following skills are known to be reduced when an item goes OE, even though you are able to put IP into that skill:


⇑
Items and skills completely unaffected by being OE

There are items and skills that are completely exempt from the OE computation.

NCU is never reduced if your computer literacy or other skill drops below 80% of the skill required to equip any item that provides NCU.

These skills are not used in determining OE. If you used implants and/or items to buff your Multi-Ranged or Multi-Melee skill in order to wield a weapon, you can freely remove those implants and/or items that buff Multi-Ranged or Multi-Melee without fear of the weapon going OE as a result of these skills dropping far below the requirements for either of these skills.

There are no ill-effects to removing implants that buff Map Navigation in order to load playfield maps or map upgrades. After you remove your Map Navigation twinking implants, you will still have access to all the maps and upgrades you loaded.

Conventional wisdom would suggest that it's always bad to allow items to be OE, but this is not generally true. In general you want to consider how badly you need the skills that are unaffected by OE. Also, for low QL items, the mathematics actually works out in your favor to be OE for certain items.

Take the following example with a pair of Miy's Tank Armor Gloves. If your Stamina skill after all buffs is 100 (we will use Stamina as the only skill considered for this example for simplicity), the highest QL of this armor you can equip without it going OE is QL 44, which requires 124 Stamina (100/80%=125). You will receive the following benefits from this pair of gloves:

If we go further and allow the armor to go into the next tier of OE, then the penalty to AC becomes 50%. Now the highest QL of this armor that we can use is QL 90, which requires 250 Stamina (100/40%=250). The benefits, adjusted for OE penalty are now as follows (again, adjusting for OE penalty):

For a penalty of just 1 point of AC in comparison to the not OE case, we received 2 more Sense, 2 more 2h Edged, and 4 more Evade Close skill by equipping at 50% OE.

OE has additional effect on pet classes. If the skill required to cast a pet falls below 80% of that requirement, the pet will become OE. The pet will default to the "/pet follow" state and completely refuse to take any orders from the pet owner. Because trader's wrangles and meta-physicist's nano skill buffs stack, it is common practice for pet classes to get both profession's buffs in order to cast the highest level pet possible. It is important to take care to make sure the pet does not go OE when the buffs run out, or at least not to be in combat when the MP's nano skill buff runs out.

There is an interesting phenomena resulting from the mathematics of OE for pet classes. Due to the fact that OE is computed as a percentage of the casting requirement, the rate for a skill to go OE increases more slowly than the rate of the requirement itself as the nano's increase in QL. This has important ramifications to the pet owner.

Let's look at engineer pets as an example:

A Feeble Warbot requires 584 skill in MC and TS. This bot will go OE if the engineer's MC or TS skill falls below 467.

The next pet is a Patchwork Warbot, which requires 596 skill in MC and TS. This bot will go OE if the engineer's MC or TS skill falls below 477.

Now let's look at the Flawed Warmachine, which requires 756 skill in MC and TS and will go OE if those skills fall below 605. Compared to the Patchwork Warbot, the engineer needs 174 more points of MC and TS to cast this pet, however, only 138 more points to keep the pet out of OE. This means that although this pet may require both MP Mocham's Gift and a Trader Wrangle to cast, it can be kept out of OE with just the Mocham's running.

Barring any changes to equipment, a leveling pet class player whose abilities are not breed-capped and nano skills are not title-level capped will be able to increase their skills by approximately 5 points each level. Although the next higher pet may be three or four levels away, the next pet that will not go OE will actually only be two or three levels away.


Last updated on 09.05.2012 by Llie
Written by Llie
Do you have questions about this article or found an error? No comments yet - Please login first to post a comment.