How to play soundeffects

Feedback: Please Login first
Contents
This guide gives you an overview of how to access and use sound effects while playing Anarchy Online. It explains where you can find the files, how files correspond with others and most importantly how you can allow others to join in on the fun of hearing your sound effects!!
1. The Voice command2. Preparation3. Application4. Notes on_01.txt files

⇑
1. The Voice command
The /voice command was introduced long ago, as an alternate way of getting other peoples attention when you are in need of help. AOU has a guide on basic Voice Commands, but this guide should include most information you need.

The AO soundeffects are placed in other folders though, and that is where it gets a little complicated.
/voice accepts paths relative to Anarchy Online\cd_image\sound\sfx\player\.

The meaning of this is:
/voice ..\NewFile
will play NewFile_01.wav in Anarchy Online\cd_image\sound\sfx\
(remember, you need to have a file named NewFile_01.txt in the folder as well, the text in that file is what you say, when you use the /voice command)

this is useful as the AO soundeffects are placed in sub-folders of these directories(folders).
..\(backslash) is used for stepping up folders and /(slash) for going deeper, and it ends with a\ before the filename.
As noted above and in the Voice Commands guide, the sound files have to end with _01.wav, meaning we are limited in our choices; there are 'only' 950 soundeffects ending with that, meaning you can play a lot, but not all.

To vary the game the same monster has various sounds when hit, the first is called hit_01.wav, the next hit_02.wav etc. I do not know a way to play the other ones, but 950 files are better than nothing for a start.

⇑
2. Preparation
You can not just use the command in the chat window, you need to make a local text file first, I will go through the procedure with a soundfile, to show how it is done.
My target file is Anarchy Online\cd_image\sound\sfx\ingame\objects\announce_01.wav

/voice ..\/ingame/objects\announce
this command will activate that file..
you just need to place a text file called announce_01.txt in the directory, else you will get the error message "You do not have that voice effect installed."

When that text file is in place, you can play the speaker announcer saying "Omni-Tek is your friend", so I suggest you put that line in the announce_01.txt file.

⇑
3. Application
With the text file in place you can now play the sound for others, even though they do not have the text file themselves, only the one playing the sound needs it, all other can hear it.
.. if they have sounds on and checked the option for allowing voice command to be played. 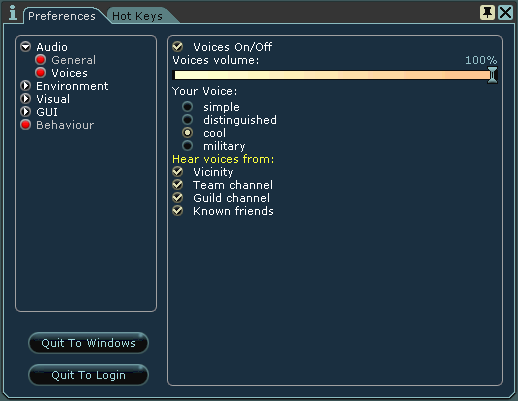 Preferences Panel on the Audio Tab
people do not need to have music turned on to hear the music, it all goes through the voice channel.
As the above it is possible to ignore these sounds, so think twice about using them too much, then people will just turn it off.

⇑
4. Notes on _01.txt files
The _01.txt files can mostly be treated as standard AO script; you can put links in them, colour them etc.
.. but /me, %m, %t, %f, %0 does not work in them
so if you want to have "Ariensky playes with the Com-Unit"
you will have to write it as *plays with the Com-Unit*
For roleplayers *'s indicate an action.


Last updated on 03.17.2009 by Ariensky
Written by Ariensky
Thanks goes to those helping to test it out.
Do you have questions about this article or found an error? No comments yet - Please login first to post a comment.