The mercenaries encounter is one of the most difficult and time consuming experiences on Rubi-ka. However, if you manage to complete this raid successfully, you'll be very well rewarded. Before you can even see the Mercenaries, you'll need a letter to give to a fellow named Otacustes, who hides in the Mercenary camp. It is fairly simple to obtain.

First, go to ICC in Andromeda. Here you need to find the ICC Peacekeeper Commander. He's usually in the little park in the center, or patrolling around it. 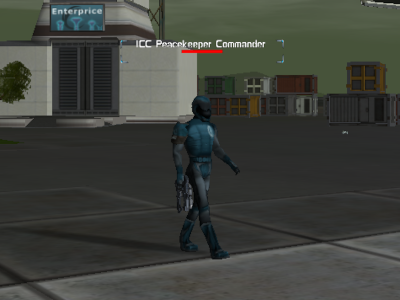 
Talk to him, and ask him about a man named Joe. When he asks: 'Joe Who?', reply Joe Two-Fingers. The commander will then tell you where to find him. He will not always be at the same place each time you ask for him, but the commander will give you a hint to his whereabouts. Here are the different locations that he can be found.

Joe's location is identified by a letter on this map 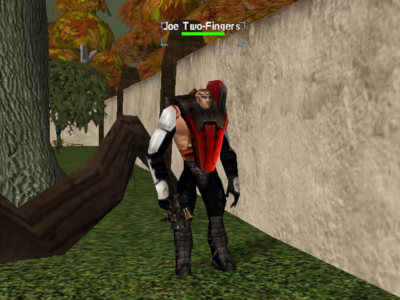 This is the most time consuming part of the mercenaries raid. First, make your way to the Primus camp, in
Eastern Fouls Plains
Eastern Fouls Plain - 680x1400
. Here is where you have to spawn Otacustes by killing a placeholder. He is marked on the map below.

If you have a few people with you, it's a good idea to kill everything in the camp, as the mobs there drop some nice stuff, including QL 200-300 empty implants, Jobe clusters and Ebony Figurines. Beware of the Notum Profundis; these mobs have the ability to warp you to them and will cast nukes. If you plan to attack them (they drop some of the highest implants), make sure the entire team goes to them. It would be a good thing to get rid of the adds that are around them.

The spawning process can take anywhere from 15 minutes to a few hours, so be prepared for a long camp. 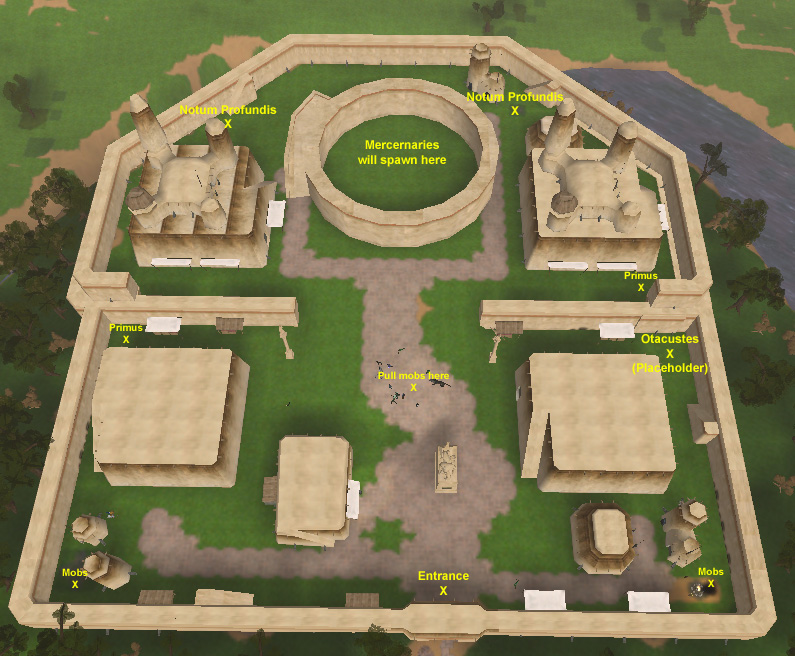 The layout of the camp 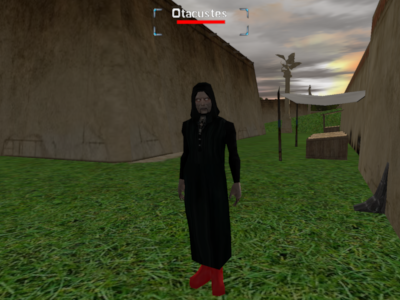 
When he finally does spawn, take this time to assemble your raid force. The reason why it is wise to assemble your raid force now, is that as soon as you give Otacustes the letter, he will vanish and spawn the mercenaries. From that point, they will stay up for 2 hours. Gather people ahead of time or you probably won't have time to kill them all, thus you will lose some loot. Otacustes doesn't despawn unless you give him the letter.

You will need a fair sized raid force. While it is now possible to clear the camp with a single twinked 220, it is much safer and quicker to have more people present. The faster you can take them down, the less chance you'll have of them despawning. When you're satified with your raid force, give Otacustes the letter and the Mercernaries will appear.

If step 2 is the longest and most annoying part, step 3 is definitely the hardest. The mercenaries spawn in the arena, inside the Primus camp. Have your raid force wait outside the camp, just south of the bridge. Here, no mobs will bother you as you fight the mercs. 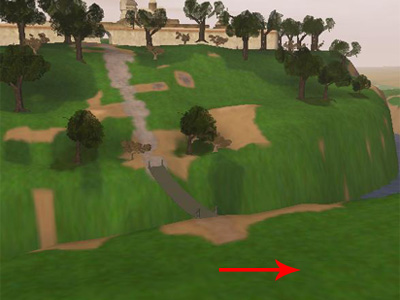 To pull one of the Mercenaries, it is no longer necesary to have a pet to aggro them. Inside the arena, there are two wooden ramps. They are standing quite near eachother, but it is possible to body-pull them one by one. Try to avoid using the cracked (north) ramp since it can have pathing issues. The other (west) ramp should be fine.

If you are careful to not create too great a distance between you and the Mercenary you pull, it can be a good idea to pull while in your yalm. 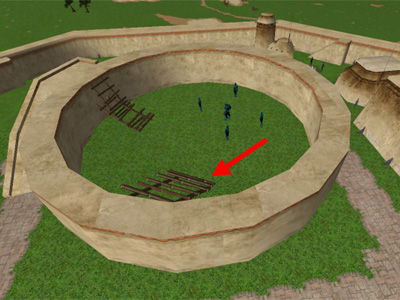 Use this ramp to pull the Mercenaries out of their Arena 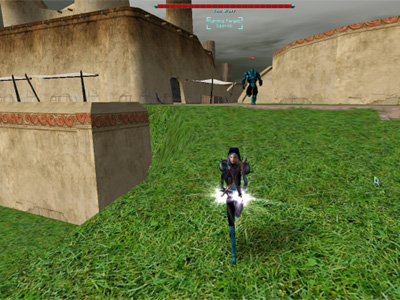 
Once you successfully pull a mercenary, what remains is simply to kill him. If you are well prepared, and have a decent raid force, this part shouldn't be too difficult, maybe with the exception of Ian Warr. I suggest that you don't pull Ian as your first target. It would be better to practice with a weaker mercenary first. I'd also suggest that once you're done killing the mercenary, the puller should go pull another one immediately, while someone else hands out the loot. This way, you'll minimise delays, and maximise your time killing. As mentioned above, you have a total of 2 hours from handing in the letter before they despawn.

All mercenaries drop, or have a chance to drop, this armor.

Each merc also drops individual loot. Here they are:


Last updated on 07.09.2020 by Saavick
Written by Tepamina. Additional information by Windkeeper.
Updated with 18.3.1 and 18.7.
Do you have questions about this article or found an error? 5 comment(s) - Click here to view them!