Feedback: Feedback-Thread
Out in Perpetual Wasteland there is a grouping of alien pods that you may have noticed when flying towards the Cyborg Barracks, or just during a random trip across the barrens. Now you get to take a closer look at the pods and bring two of the behemoths to their... knees? 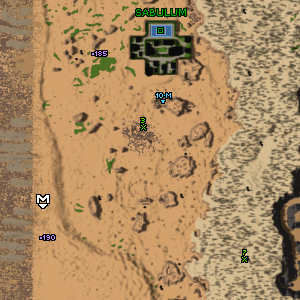 Several pods will be in the general area 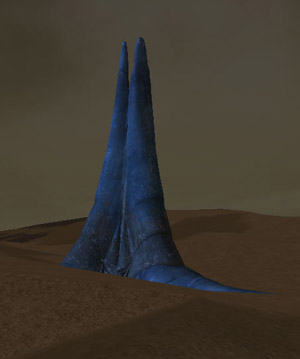 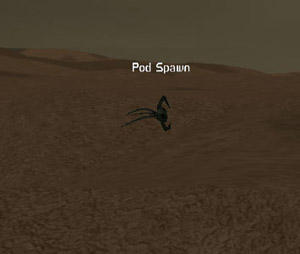 The pods spawn two adds at a time

⇑
Strategy
The goal of the mission is to get the alien pod down to 80% health (this means knocking off 20%, not knocking off 80%) and then using the provided Agency Laser Tagging Device to call down an orbital strike to finish the pod off. You do this by having the pod targeted, and then right clicking on the tagging device. You'll recognize the tagging device in your inventory as such:

There are two tricky parts to this endeavor.

Firstly, the alien pod will not go down without a fight. It will continually spawn two mobs that will attack you. Your best bet here is to take down one of the pod spawn and then focus on the alien pod itself. You won't have long before another pod spawn is... spawned, but you'll be able to get a good rhythm down that gives you a few seconds to attack the pod in between having one and two pod spawns on you.

Secondly, once you have clicked on the device, you have mere moments before the orbital strike begins. You do not want to be anywhere near the alien pod when the strike starts, so you need to RUN LIKE THE FRIGGIN' WIND! A run buff will help you here, because even if you start running immediately, you are likely to get caught in the blast, and these are not tiny hits of damage. They can and will kill you if you don't get out of there and far enough away. The orbital strike will also wipe out any of the pod spawn that are left, so you won't have to deal with them afterward.

You have to take down two of the pods, so dying in between is not preferable.

A few other items of note that will help you in this mission:

Once you have taken down both alien pods, you need to return to the Alien Agency Handler and collect your reward.


Last updated on 07.30.2012 by Silvana
Information and images by Silvana
Additional information by Snakebite
Do you have questions about this article or found an error? 4 comment(s) - Click here to view them!