Captain Cante Hawke needs your help! Naturally, after the installation of the Battlestions, there has been an increase in the arms race. Omni-Tek wants to control them and the clans want to make sure they don't.

He informs you that he has received many new reports of high corporate activity related to heavy assault training such as Mechanical vehicles, rocket launchers, special forces, and such.

The Clans have located 5 key Omni-tek camps. He wants you to lead the force to stop each one.

Captain Hawk is located near the Tower shop, in Old Athens.

All these bosses have a chance to drop any random Dreadloch weapons, high quality clumps to improve Ofab weapons and armor as well as the new combat token board. You do not need to mission to kill the boss for this loot. Although, completing the mission will give you a very nice item: a 50 token + 500 VP merit token.

Note: not every boss can drop every item. Special Agent Moxy for example does not drop Dreadloch Stabilising Aid, Dreadloch Aiming Apparatus or Smuggled Nanite Merit Board Base. At this time, we do not have separate loot tables for each boss available.


CaptainHawk's resourses tell him that there's a certain commander in Clondyke. He was dishonorably discharged from OTAF, and recruited by the Unicorrns. He is known simply as Force Recon Commander 191 and he now tests pilot prototype mechs. Your job is to get rid of him. 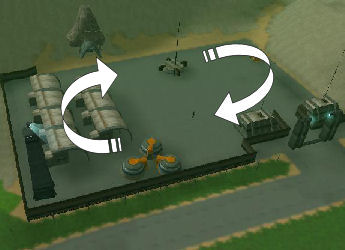 Force Recon Commander 191 is in the base, his movements are shown above.


You will first have to kill 5 Deaths Squads that are around his camp. These shouldn't be too hard to get rid of. 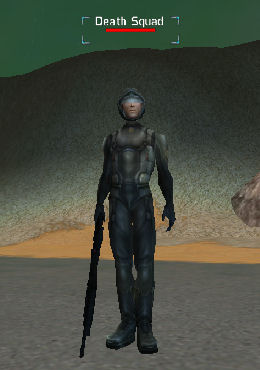 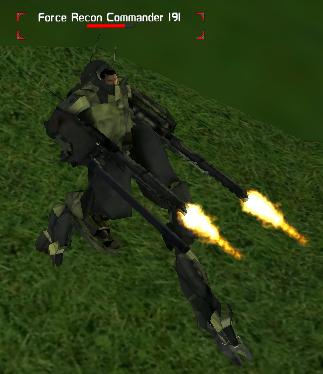 You will need at the very least 5 people to kill the Force Recon Commander. A full team, or 7 people is preferable. You will want everyone in the team meched, as this is the only way that he will not insta-kill you. When you have killed all the adds around him (there are a few), pull him outside the base area. If you have a crat in your team, he can stay un-meched, and spam stuns, as he is vulnerable to them.

The Force Commander has the capacity to un-mech you. This is the reason why many people are needed, as he will gradually un-mech your entire team. If everyone is un-meched, the fight is over, and you will have to regroup.

He has the power to un-mech attackers.

The have found an Alien artifact, some kind of signal tower. It will be your job to destroy it, and kill the commander in charge of it: Special Agent Moxy. You will be given a special tool to destroy the tower, or you can simply shoot it down. 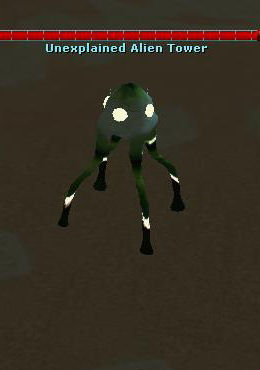 Your first task will be to clear the area of guards. Kill 5 Perimeter Enforcements. Beware of the scientist, they have healing capabilities. 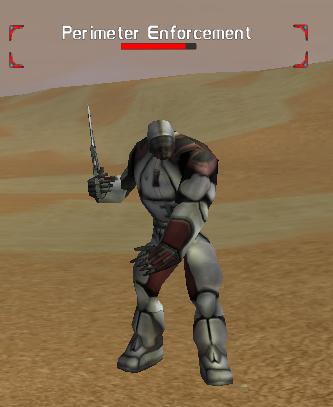 Once these are disposed of, you will have to target the tower, and use the tool that Captain Hawk gave you. This tool will send a signal to an orbital laser, so once you use it, run like crasy. Again, you also have the option of simply bringing it down the standard way: with your weapons. Once it is blown up, Special Agent Moxy will appear. 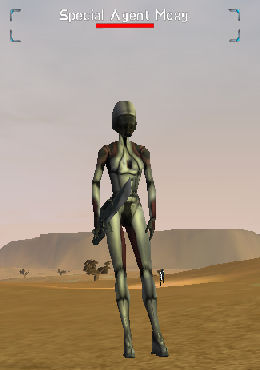 Special Agent Moxy does not have alot of hp compared to the other camp bosses. She does however have sick damage, and can easilly tear any tank apart in 2-3 hits. This is mainly because she completely wipes your ncu. The only way that I've been able to kill her so far is kiting, in some form. With a really good team, with a couple of docs and tanks, it is possible to take her down without kiting, but usually, in some part of the fight, you will eventually kite.

Major Woon has restored an abandoned Outpost in Pleasant Meadows. It is suspected that he is training troups here. Captain Hawk wants you to stop them. 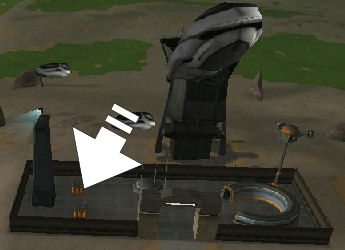 You will first have to exterminate 5 Assault Troopers. These are found all around the camp, and inside also. It might be a good idea to kill Corporal Morrisson and Sergeant Kingdon, as they might give you problems later on. 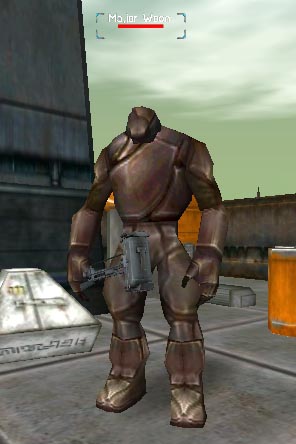 Before going into the camp to kill the Major, make sure to get rid of all the adds. It is a good idea to make sure also that you kill them fast to prevent respawns, as these will be very problematic later on.

Major Woon has a massive HP bar and is quite strong. He is stationary however, so he will not follow you around. However, he will warp people to him, which will be problematic. He also has an AoE stun. The docs should stay well away of his stun, as stunned docs can lead to disaster. The doc can safelly stay on the eastern building of the camp. If he stays here, he will usually avoid being warped or stunned. Remember though that Free Movement will dismiss stuns. This will greatly help you in this fight.

AoE Stun
He warps your team members to him

There's a new camp in Netrom that specializes in the training of assault vehicle drivers, gunners and loaders. You are ordered to destroy this camp, and the person who runs it: Assault Commander Pax. 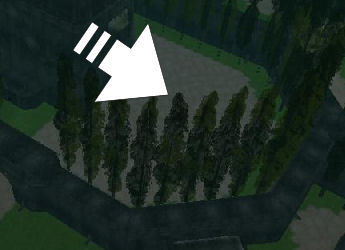 Once here, you will first have to exterminate 5 OT special forces. These should not pose too much of a problem. They are pretty spaced out, so pulling should be easy as well. 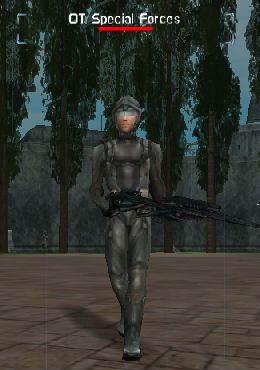 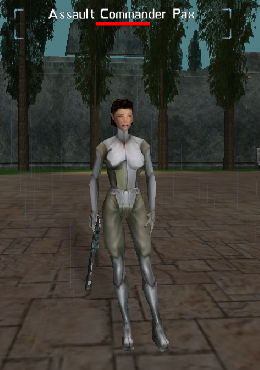 Pax is also stationary, so this fight will be easier if you kill all the adds around her. She spawns adds, named Executive Defenders. These shouldn't pose problems. However, when she gets just past the halfway mark in her health, she spawns 2 huge level 250 mechs (Assault Sargeant Helene Moneal and Assault Sargeant Ellen Moneal). These are very nasty, and they seem very drawn to heal aggro. To be able to handle these, you will probably need to have a couple of team members mech up. Once your mechs take them on, they shouldn't pose a problem. 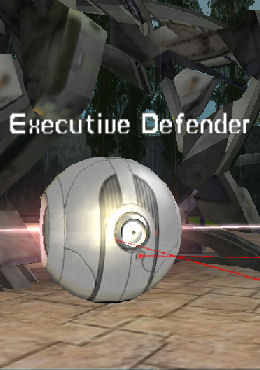 One of the Thunder Brothers, Peal Thunder, has lost a few marbles. Captain Hawk would like you to exterminate him before he launches some missile attack on civilian targets. He gives you a warning that he runs an Elite group of agents.

BEWARE!! This zone is 25% and you will be open for pvp. Many guards inside this encampment will also flag you for pvp. 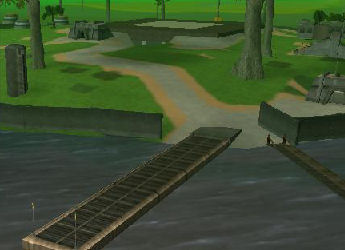 You will have to dispose of 5 Stealth Troopers. These are agents, so they are hidden. If you do not have enough perception, you will just have to carefully walk around until one decides to gank you. At this point, pull him to a safe spot to kill him. 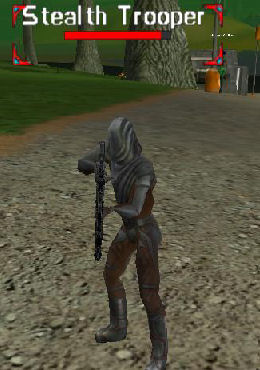 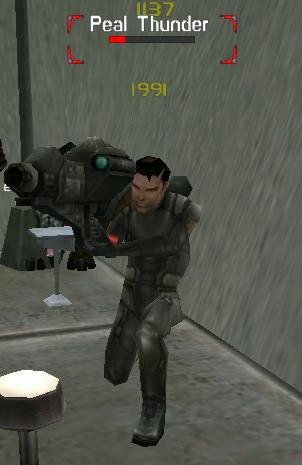 
Peal is inside the encampment, hiding behind a desk with a rocket launcher. He will not move from that spot. This is probably the easiest boss of the 5. Have your tank rush to him, and your doc stay well back. He has an AoE nsd, but this shouldn't pose a problem if your doc stays out of range.


Last updated on 06.25.2021 by Saavick
Written by Tepamina. Additonal information provided by Windkeeper.
Do you have questions about this article or found an error? 4 comment(s) - Click here to view them!