Temple of the Three Winds

You may remember the Temple of the Three Winds; the place of worship of a dangerous cult in the desert of Greater Tir County. At level 61, you might have breathed a sigh of relief... to then find out later that the cult has a more dangerous temple nearby, called the Inner Sanctum. After a while though, you may have felt reasonably confident about your chances of defeating the cult once and for all. Recently however, the cult has opened up a new and more fortified temple for players level 201-220...

To enter this new dungeon, you have to be level 201+ and teamed in a raid of up to 6 people. The entrance is behind the same door as the original temple. If you want to refresh your memory on how to get there, please consult our guide for the original temple. Once you kill Binyacht the Faithful, you receive a 4 hour raid lock. This lock is updated to 4 hours again for every boss you kill.

The layout of the temple combines aspects of both the original Temple of the Three Winds and the Inner Sanctum. The first hallway is packed with Cultists and moving fire effects, which you'll want to avoid getting hit by. At the end stands a worshipper called Binyacht the Faithful; upon killing him, a portal spawns which grants access to the next section.

Throughout the temple you will find Cultists, Faithfuls, Acolytes, Exarchs and various bosses. This guide will describe the special abilities and loot from each encounter.

Note: you cannot use any of the portals while you or your team are in a fight. Unlike in the original temple, cultists do not give up the chase after a short distance and they will also try to root you to make training even more difficult. If you are looking to blitz through, you should make sure you can either lose the aggro or deal with the train of mobs. 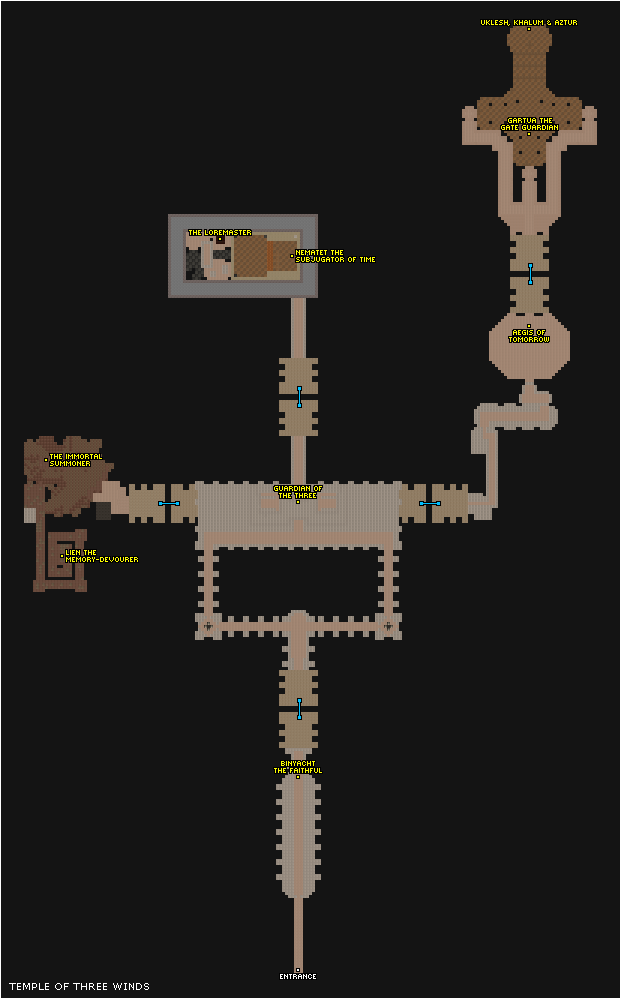 Every boss has a number of unique items they can drop, as well as some items that I currently suspect drop from every boss. It appears that every boss has a chance to drop any piece of Twilight Entreatment Armor, any section of the Stampede of the Boar and Sting of the Viper specials, as well as Rods of Dismissal and all three variants of the Notum Ring of the Three. Because I've not seen all of these items from every boss so far though, I've included the specifics that I've managed to confirm.

Last updated on 07.03.2020 by Saavick
Written by Saavick.
Do you have questions about this article or found an error? 6 comment(s) - Click here to view them!